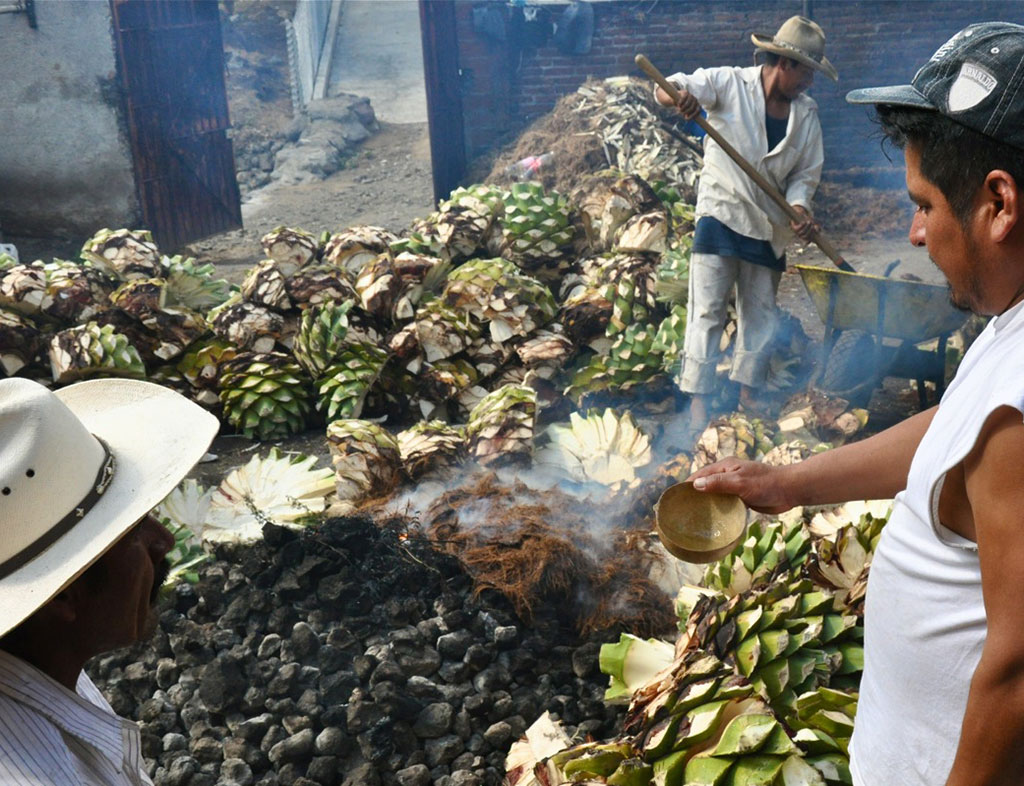 Producing every perfect drop of mezcal takes many a hot desert day – close to 2,600 of them in fact – until the agave plants are ready for harvesting. When you consider that six million litres of the Mexican spirit is produced every year, that’s a lot of potential siesta time.

Mezcal is a move away from the tequila-slammer culture to hit UK bars in recent years: this fiery drink is one to be sipped and savoured. This is a beverage that manages to offer something new to the most adventurous drinkers, and at 44-54 percent ABV, it’s not for the feint of heart.

Eduardo Gomez Resendiz is head of international spirit importation company Amathus Drinks, and a self-proclaimed mezcal connoisseur. “It is a very delicate process,” he says. “The way in which every farmer crafts his mezcal is unique – and he will never tell you the secrets behind his personal recipe.”

“It is only recently that agave farmers have realised the potential for trading. While most will remain true to their traditions, some larger companies have experimented with ageing and flavouring the spirits. Because people are used to their aged tequila or aged rums, they expect a variety of aged mezcal. That’s fine, it adds to the trade possibilities. But you will never see a local drink anything but the traditional blend. No way!”

Careful cultivation
Mezcal is made from the agave plant, which lives for around 30 years and looks similar to a cactus. The mystical blue agave was considered sacred in pre-hispanic Mexico and its cultivation is thought to date back to the Spanish Conquest, when conquistadors experimentally distilled the fruit.

The agave used to make the spirit is harvested when it is seven or eight years old. The heart of the fruit, known as the piña, is roasted for four days and then crushed – traditionally by a donkey-powered grinding mill. It is placed in wooden barrels with water and left to ferment for several days. The mash is the distilled for the first time, yielding a low-grade alcohol, before the fibres are removed and the alcohol is distilled again. After the second distillation, the mezcal is blended, creating a consistent grade of alcohol, before being bottled or left to age in oak barrels.

Mezcal is sold in various formats. Mezcal blanco, the traditional form of the spirit, is aged for no more than two months. Mezcal reposado is left in barrels for between six months and one years, whereas mezcal añejo is aged for at least a year and is mostly exported. True Mezcal is made from 100 percent agave and therefore supposedly never results in a hangover. Mezcales mixtas are a more recent creation, which only require 51 percent agave and are often used in cocktails, mixed with tequila and lime juice.

While there are more than 170 varieties of mezcal made in Mexico, not all are recognised by traditional distillers. States that have certified agave-growing areas and production facilities include Durango, Guanajuato and Oaxaca, where the highest volume of the spirit is produced. Mezcal produced anywhere else is not considered authentic, especially as many mezcalerias sell their poorer-quality alcohol under the mezcal name, latching on to its growing status.

Mezcal distilleries are still fiercely traditional and small, unlike the tequila industry, which now produces great volumes of drink in large factories. It is difficult to trade with small village farms, who often can’t afford the trademark and branding required for exportation. According to Gomez Resendiz, it is often because the farmers just don’t care: “They are from small communities with fiercely guarded traditions – it takes someone with a business knowledge, from outside the community to say, ‘Hey, you could make money from this!’”

Travelling spirit
Made across 300,000 hectares of land owned by 9,000 producers, under more than 150 different brand names, mezcal has been increasing in popularity in its home country, and over the past five years has gradually moved from its traditional countryside roots to the hip, cosmopolitan bars of Mexico City. But due to complicated and expensive trading laws, mezcal, unlike its cousin tequila, has only recently begun to penetrate the European market.

Now, however, international traders are picking up on the opportunities available. In 2011, Mexico exported more than 163 million litres of the spirit, mostly to the US. This figure is more than three times that exported in 1995, indicating a huge growth in popularity. Interest is growing in Spain, France and the UK especially.

London is embacing the trend, with an increasing number of bars in central areas beginning to stock the spirit. Kane Brooks is the Beverage Operations manager for ETM Group, which runs a series of popular bars and pubs across London. According to Brooks, mezcal is most frequently requested at Canary Wharf, Covent Garden and Chiswell Street Dining Rooms, where it is often used in cocktails.

“A couple of years ago you would never have heard the question: ‘Do you have any mezcal?’, but now it is becoming more and more common,” says Brooks. “We stock a brand called Quiquiriqui for their role in the revival of mezcals – their success has definitely put the mezcal category on trend.”

“Mezcals were traditionally the domain of fellow industry professionals. Now we have seen a huge spike in requests and consumer knowledge of the drink.”

The concept of mezcal as a staple house spirit is infiltrating London and settling in as the city’s cocktail base del dia. So much so, Mexico’s tourist board is picking up on the potential.

Anna Bruce is a freelance photographer from Oxford. Last summer, she was commissioned by the Mexican embassy in London to produce a body of work illustrating newly exportable mezcal. “I spent a month in Oaxaca and ultimately came back with a photographic study on the artisanal identity of Mezcal to promote in the UK,” she says.

Bruce became interested in the mezcal trade after working with alcohol distributors in the UK. “There’s a growing trend here towards drinks like ale and organic cider, and similarly I think people are becoming more interested in specialised spirits with more flavour – as a change from vodka-based drinks in city bars.”

She adds: “The fact that the Mexican embassy are so keen to fund projects like mine shows that the business opportunities are there.”

There is a growing bias towards organic produce among young professionals in London, reaching them by way of microbreweries and farmers’markets. Consumers want to enjoy natural drinks that are either locally or responsibly sourced and have an interesting background.

“Mezcal fits into that idea,” says Bruce, “and because it has only just become feasibly importable, it has also carried that mystery factor. I think it will go far.”

Symonds recommends that unlike tequila, mezcal should served with ice and chilled orange slices.

Around the world in six million litres Oaxaca
Birthplace of the drink, the Mexican state of Oaxaca produces 80 percent of mezcal spirits. The land is mountainous and lies 5-8,000 feet above sea level, the perfect climate for natural airborne yeasts to ferment the agave fruits. Mezcal is distilled in small quantities across several villages – each with slightly different methods and traditions, so no two blends are the same. Locals drink mezcal long and straight. Farmers often distill unique batches in preparation for special occasions such as weddings, anniversaries and religious festivals.

Mexico City
Over the past five years, mezcal has penetrated the capital’s bars and club; any good bar now has a blend to offer. More recently, mezcalerias are opening in fashionable areas of the city such as the artisanal Zona Rosa neighbourhood. These venues offer taste menus for a range of bottles and flavours.

United States
The taste for mezcal crossed the US-Mexico border and set up shop in Los Angeles. The city has several fine mezcal bars including La Descarga on North Western Avenue and Las Perlas on East Sixth Street. Since 2008, mezcalerias have opened in other, primarily Hispanic, areas, but more recently have become a part of the New York City nightlife.

Europe
The Mezcal trade in Europe is very new and has grown quickly, especially in the UK. Gomez Resendiz said: “The consumption in the UK is close to double that of the rest of Europe now.” Paris is home to popular bars such as La Mexcaleria on Rue des Tournelles, and the more recently opened Little Red Door, which offers 10 mezcals and two cocktails. The first mezcaleria in London, QuiQuiriQui, opened as a pop-up shop in Hackney, east London, a year ago and offering 30 varieties. Now a mobile store, the company operate a ‘mescal ambulance’, available for hire, and plan to open a new premises later this year. Popular Mexican food chain Wahaca have followed the trend and now offer a menu of 27 pure agave mezcals at their restaurant on London’s Charlotte Street.