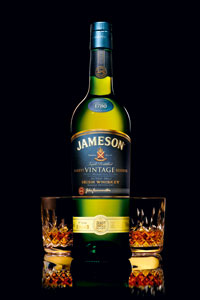 For starters, John Jameson established his now legendary whiskey distillery in Dublin in 1780. A true family affair, the original John Jameson passed his distillery to John II and he to his son John III. Some fathers give their sons bicycles as gifts; John Jameson gave his the secrets of how to distil quality whiskey. “John Jameson & Son” you see became a family business through and through.

Unusual yes, but maybe not unique. How many whiskeys though can say without fear of a lie that their Master Distiller learnt his trade from his father? Jameson’s current Master Distiller, Barry Crockett, stepped right into his father Max’s shoes. Not only that, Barry first saw the light of day in The Distiller’s Cottage at the Old Midleton Distillery. Talk about being born for the job.

Together with the other Jameson Masters, Barry has crafted the Jameson Reserves, a collection of whiskeys to be proud of and which any father would be delighted to receive.

The Jameson Reserves
Created and blended at our Single Distillery in Midleton, using only the limited stocks of distillates on hand, the Jameson Reserves embody this unbroken heritage and pursuit of excellence.

Jameson Signature Reserve celebrates the legacy of John Jameson. His signature, which over the centuries has come to be recognised as a stamp of quality, to this day appears on every bottle of the world’s No. 1 Irish Whiskey. Exclusive to travel retail, Jameson Signature Reserve also delivers the signature taste and triple distilled smoothness of Jameson with a significant contribution from Oloroso sherry casks.

Jameson Gold Reserve is a creative blend of three whiskeys of advanced years, one of which is uniquely matured in virgin oak barrels. It’s the inspired choice of this virgin oak, coupled with the bourbon barrels and sherry casks that account for the whiskey’s opulent taste and satisfying complexity. This is a marvellously rich pot still character whiskey.
Jameson Rarest Vintage Reserve is the oldest and rarest whiskey in the collection. A triumph of the collaboration between the Jameson Masters and winner of Double Gold at the 2011 San Francisco World Spirits Competition, this 46 percent ABV non-chill filtered masterpiece represents the pinnacle of the distiller’s art.

The peak of perfection, Jameson Rarest Vintage Reserve is the most exclusive expression of Jameson. This magnificent Reserve features the pick of the oldest grain whiskeys and a rare pot still whiskey that was aged to a fantastic mellow sweetness in specially commissioned port pipes. The resulting union has a glorious, fruit rich character.