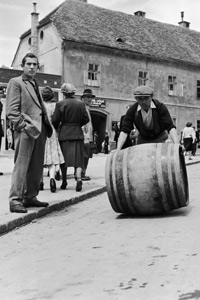 This year the Decanter World Wine Awards gave Croatian wine an impressive 27 medals – eight gold, five silver, 11 bronze and three commended. Angela Muir MW, who led the panel of judges for Central and Eastern Europe, described Croatia as the discovery of the year: “Some great white wines, both dry and dessert, with bags of character and a whole bouquet of varieties and styles.”

However, the eight gold medals all went to sweet wines, suggesting the country’s vintners still have a lot of work to do before they can compete with the more popular old world regions. One distinct problem they face is that the grape varieties grown in Croatia are little-known outside the area. Plavac mali, malvazija and graševina may be well known and popular in Croatia – in fact the locals’ enthusiastic love for these wines is one of the reasons they’re little known outside the region – but few foreign laypeople would be able to identify them as reds or whites, let alone offer a more involved description.

The other biggest problem is the region’s history. It was the Greeks who first introduced vineyards to the Croatian coast in the fifth century BC, and the Romans who cultivated and organised the industry, which flourished until the end of the 15th century.

But the arrival of the Ottomans and strict Islamic anti-alcohol laws almost completely erased eastern European viticulture. It was only the Ottoman Empire’s tolerance of Christianity that saved this great swath of the old world vineyards: priests and monks were allowed to continue producing wine for use in church services. This limited growth continued until the Ottomans’ defeat by the Austrian Habsburg Empire, when wine production was again allowed to thrive.

In the 1800s European vineyards were swept by a plague of phylloxera – tiny, yellow, sap-sucking insects that spread blight across the continent and completely eradicated some forms of grape from Croatia. The industry was disrupted once again in the 20th century – first by Yugoslavian communist rule that discouraged private ownership and prioritised quantity over quality – then by the Croatian war of independence, which destroyed a great number of vineyards and wineries.

Many are seeing the country’s success at the Decanter awards as a herald for improved international trade – it is certainly a testament to the resilience of the craft. But according to AIG chief executive Robert Benmosche, who has a unique interest in the area, “they are not really there yet. They are just struggling coming back from the war, they are still struggling with this whole idea of capitalism.”

Mr Benmosche first visited Dubrovnik on a corporate retreat in the 1980s, and was charmed by the city and scenery. He dreamed of retiring to Croatia and producing wine from the nation’s vineyards, and spent millions to make his dream come true. He bought and renovated a massive villa, acquired vineyards and spent a year seeking approval from US and Croatian authorities to import 1,500 zinfandel vines from their more well-known home in California.
At the time DNA testing had linked the Croatian grape crljenak to zinfandel, suggesting this more well-known grape had been among those destroyed by blight in the 19th century. “I was curious to see what would happen,” says Mr Benmosche. “If zinfandel grapes came from Croatia – they weren’t sure then, but they are now… why not see if it grows?”

Mr Benmosche took the helm of AIG in August this year, but angered many by leaving on holiday just days later. It transpires this particular vacation had been planned to coincide with the first harvest of his imported vines – now multiplied to 6,000 plants. “My hope is that the vineyard becomes a source of true, high-quality wine for this region,” he says.

Experts say that reintroducing zinfandel wine to Croatia makes good business sense. Carole Meredith, the geneticist whose 2001 DNA tests identified zinfandel’s origin in Croatia, says that assuming the quality is good, Mr Benmosche’s wines will be able to compete in the world market because of the popular name.

“Zinfandel is an established wine variety with a global market,” she says. “There is almost no market for the other Croatian grapes because the names are unfamiliar.”

But export isn’t going to happen any time soon, says Boris Mrgudic, who manages Mr Benmosche’s vineyards in Viganj. The first harvest in August went well, but it will take years to show a profit.
Meanwhile, with no mainstream British retailers selling Croatian wine, the only way to enjoy the country’s recent success is to find a specialist importer or – better still – visit.