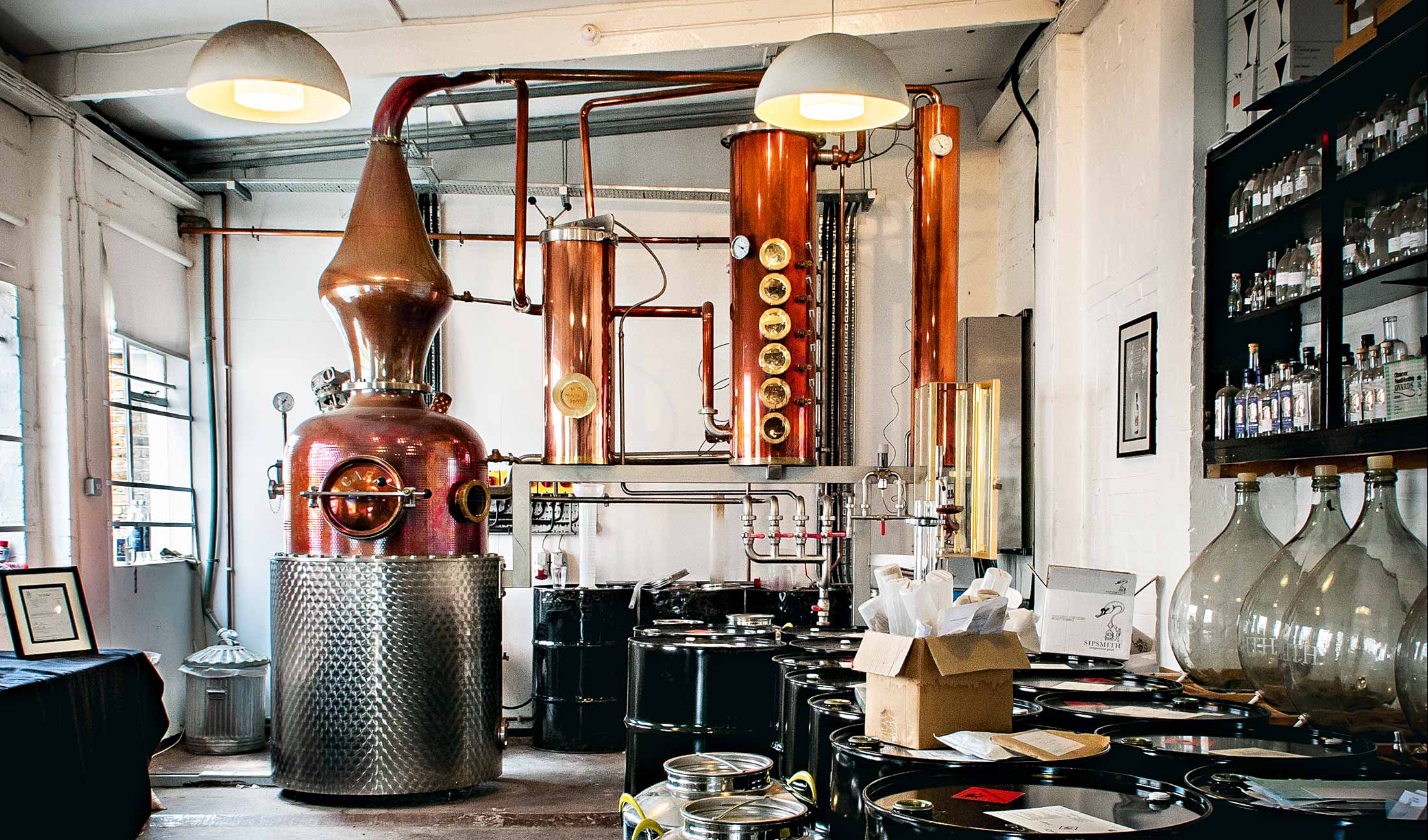 ‘Mothers’ ruin’, ‘rotgut’, ‘strip-me-naked’: not a list of dodgy nightclubs, but pseudonyms for gin, a spirit burdened with names that conjure disaster and strife. Its negative narrative is epitomised by William Hogarth’s Gin Lane, a 1751 etching of drunken debauchery on a London street, which was shared widely to put people off the spirit.

Now you know a little more about gin, what do the experts recommend by way of gin drink recipes?

Emil and Joe, Brooklyn Gin: “Brooklyn Gin Martini. Three part Brooklyn Gin, one part Dolin Dry, a dash of orange bitters, garnished with a lemon twist. We’re also a sucker for a good gin and tonic. Our friends at Saxon + Parole make one of our favourites with their own tonic.”

Jon, Hernö: “London dry should be neat, or with a dash of tonic. Hernö Juniper Cask Gin, the world’s first juniper wood cask matured gin should always be neat.”

Sam, Sipsmith: “I think gin holds up stunningly well in a martini, likewise in a gin and tonic. Those two celebrate this gin in the best way, the flavours are big and complex, but they’re very balanced. I’m a big martini man myself.”

It is curious that a simple drink inspired such puritanical backlash. Perhaps the secretive manner of traditional home distillery has something to do with it. Maybe it’s the duplicity of the spirit’s multiple, subtle flavours. More likely (and certainly in the case of Hogarth’s depiction, which was commissioned by rival beer brewers), producers of other beverages see a real threat in the sheer popularity of gin.

Despite this, it is only in the past few years that demand for gin has edged back towards its eighteenth-century peak. Fuelled by a growing collection of independent distilleries – in turn inspired by the now-ubiquitous craft beer movement – gin is available in more varieties, and is being made in more countries, than ever before.

These small operations, many run by just one or two enthusiasts, are reviving traditional methods of gin production. Fresh fruits are peeled by hand, juniper berries are burst on site, and each bottle of spirits is sealed and labelled by its producer. Most importantly, old-style copper stills and chambers are being brought back into use.

With a still, botanicals (the ingredients selected to create each gin’s unique flavour) are heated in a neutral spirit. The vapours pass through a network of pipes; the condensed liquid is then collected and diluted with purified water. Distillers using copper chambers lay their botanicals on trays. A cloud of evaporated alcohol circulates the chamber, picking up tastes and aromas.

American origins
The movement appears to have originated in the US, where examples of craft gin can be found in almost every state. In New York, Emil Jättne and Joe Santos together founded Brooklyn Gin in 2010.

As large-scale manufacturing removes us from the origins of the things we consume, these independent projects reconnect consumers

“We’re an independent company of three people making gin here in New York,” Emil explains. “There is an attention to detail, freshness and craft that we can give our gin. We make 300 bottles at a time so we’re able to hand-peel all our citrus and hand-crack our juniper berries. That’s what makes Brooklyn Gin’s flavour so fresh.”

The individual attention Emil and Joe give each batch of gin is far removed from their mass-produced counterparts, where frozen or dried peels are used, and individual botanicals are difficult to differentiate. Crispness and complexity of flavour is a point of pride at Brooklyn Gin. “It takes some time to hand-peel all the lemons, limes, oranges and kumquats but we like the vibrant flavours we get. A top note of lavender adds complexity,” says Emil.

Yet the dedication of the Brooklyn Gin team would mean nothing if there was no market for their product. Fortunately, they have no shortage of fans. “We’re lucky that many bartenders and spirit enthusiasts recommend Brooklyn Gin to others. There is a desire for American-made spirits that are handmade with care and integrity.”

Connecting consumers
This may be the key to the success of small-batch distilling. As large-scale manufacturing removes us from the origins of the things we consume, these independent projects reconnect consumers, giving them insight into every step of the production process.

Craft gins are available one very corner of the globe. Here are some of our favourite gin drink recipes:

Based on the original Black Forest recipe of Wing Commander Montgomery Collins, this gin was named after his monkey Max, who was adopted from Berlin Zoo during WWII.

Made in a copper chamber to a traditional recipe with handpicked botanicals, including rowanberry, heather, bog myrtle, dandelion and apple.

This unique drink features all-Australian ingredients, including wattle seed and bush tomato. Small batches are created in an imported still.

Unusually, the Leopold brothers distil every botanical separately, as they believe it leads to a more intense and vibrant flavour.

Sam Galsworthy, from Sipsmith, an independent distillery in west London, was charmed by this notion when his job at a UK brewery transplanted him to the US. “I was exposed to a culture that really understood the drinks market at the top end. One of the areas I learnt most about was what they called ‘craft’. At the time it was all about microbreweries, but what really engaged me was the little spirit distilleries popping up. What ‘craft’ meant to me was when you use your hands to make things in really small batches – not pushing things down production lines.

“We as consumers are really keen to learn more about what we’re consuming. We want to know where it’s made, by whom, how it’s made, and when it was made, so it was fascinating to understand what was in the bottle. I was convinced the UK would welcome the opportunity to learn more about gin. A lot of people have been to a brewery, or understand what it’s about – same with wine – but when it came to spirits our insight was that nobody knew what distilling really was. Part of our mission was to lift this veil of mystery that exists over the industry.”

Like their US peers, Sipsmith have found no shortage of support. In the four years they’ve been in business over 10,000 people have visited the distillery for a tour, and Sam and the team have noticed a recent increase in demand for gins. “I think there has been an increase in other gins too and in gin bars,” says Sam. “A lot of people are really celebrating London’s great spirit, in fact, it had almost been forgotten, so it’s fantastic that so many bars are now celebrating gins.”

Despite originating in the Netherlands and Belgium as ‘jenever’, gin is most closely associated with the city of London. From the late seventeenth century, gin was universally liked in the English capital, finding fans particularly among women and the lower classes – a fact that stoked the ‘gin panic’ of the 1720s. At the height of its popularity customers only had to part with half a penny for a ladle of gin from a street vendor, and it was estimated there were 7,000 gin shops in London.

In their personal pursuit to celebrate gin’s long legacy, Sipsmith enlisted Jared Brown, a historian of spirits and the company’s Master Distiller. “He’s created a museum in the south of France all about spirits so he has access to a large number of recipes,” says Sam. “He suggested we use a combination of a couple of these as a formula for our gin. We just made a couple of tweaks to dial down the sweetness and increase how dry it was. So what we’ve created is a recreation; it’s a resurrection of an old style of gin, on an old style pot still, but with modern technology that enables consistency.”

London dry
Distilleries all over the world now produce their own twists on the classic ‘London dry’ gin. In Sweden, Hernö gin – a relative newcomer to the scene, having released its first batch in December 2012 – has been much awarded for its contribution to the craft community.

“There has never been another spirit that has interested me this much,” says Jon Hillgren, Founder and Master Distiller at Hernö. “Small scale makes it possible to adopt very subtle flavours and botanicals, which might not be possible on a big scale.”

As well as being the world’s northernmost – and Sweden’s first – distillery, Hernö uses only organic botanicals to flavour its gin. Jon settled on a harmonious blend of juniper, coriander, meadowsweet, cassia, black pepper, vanilla, lingon berries and lemon peel – hand-peeled, of course.