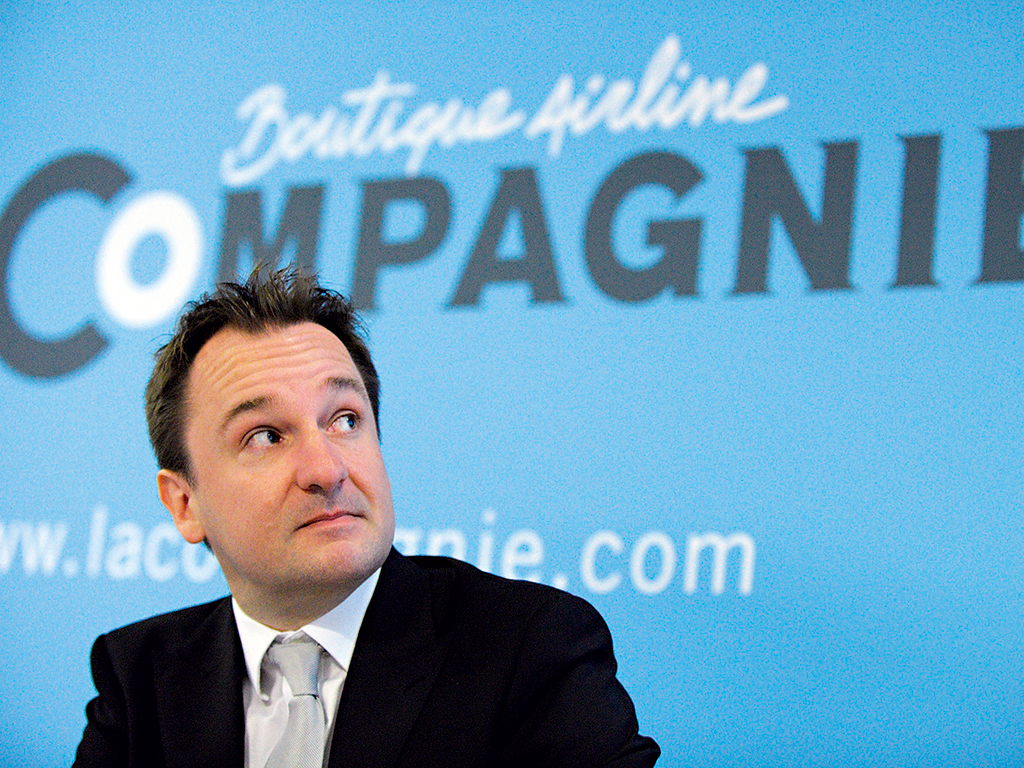 La Compagnie Chairman Frantz Yvelin at the airline's launch in June. In July the company began flying its one and only plane from Paris to Newark, New Jersey, business class-only

The financial constraints that have come to bear on passengers and airlines alike have forced those in the aviation space to focus on budget ahead of business flyers. Rising oil prices have turned commercial travel into a costly feat, and the financial crisis has seen average holiday spend nosedive.

Gone are the days when legacy airlines ruled the skies; instead, a golden age has come for low-cost carriers and no-frills travel. By contrast, the five-star dining, lavish seating and luxury in-flight offerings of business class-only flights represent the other side of the coin – one often characterised by failure.

Although flying first class conjures up images of wealth and extravagance, the business of business class often yields little in the way of returns, recently causing some airlines to scrap their first class offerings altogether. Analysts with a penchant for drama have for years speculated that the death of first class is nigh. But although the effects of the downturn have forced many airlines to turn the dial down on their high-end propositions, there remains a market for passengers who insist on travelling first, irrespective of the price.

Gone are the days when legacy airlines ruled the skies; instead, a golden age has come for low-cost carriers and no-frills travel

A short history of failure
Business class-only airlines enjoyed a brief stint of success between 2005 and 2008, reaching an all-time high in 2007 and crashing spectacularly in the months that followed.

Where once Eos, MAXjet, Silverjet and L’Avion were all running business-only flights across the Atlantic, and with great success, all four have since come unstuck. MaxJet filed for Chapter 11 Bankruptcy towards the latter stages of 2007, whereas Eos collapsed in spectacular fashion during the spring of 2008, both due – apparently – to the unrelenting pressures that came courtesy of the financial crisis.

On the other hand, some carriers have negotiated the high-end aviation space with far greater effectiveness. For example, the British Airways-owned OpenSkies offers a ‘private jet’ service, split into three cabins, each with added details such as beds, comfortable seating or a personal iPad. Elsewhere, one of Qatar Airways’ six daily flights is a Heathrow-Doha all-business operation, and is proof that there still exists a sizeable market for premium travel.

“Business class flights are growing,” says Peter Kenworthy, director of Mott MacDonald’s air services advisory business. “We are seeing the provision of such flights by the larger network carriers, and business class-only flights are also being introduced by legacy carriers to supplement and complement their existing operations.”

New market players
The introduction of new market players to the business class-only space is also a timely reminder that there is a market here for the taking. Enter La Compagnie, a carrier that in July began flying its one and only plane from Paris to Newark, New Jersey, five days a week, business class only. La Compagnie maintains that where so many others have failed, it will succeed, by focusing on the appropriate price for the privileges in question. “It is not the same model as has been tried before. It is not a deja vu,” said the carrier’s co-founder and Deputy CEO Peter Luethi at a press conference in June. “It is not going to be the most luxurious business class, but it will be the best for the price.”

The common misconception with respect to all-business class carriers is that the market isn’t large enough to turn a profit. On the contrary, the reasons for past failures pertain to poor planning and inadequate funding – aside from the more general issues to do with economies of scale, limited back-up, infrequent corporate/flyer programmes, and lack of brand identity.

“Capturing market share from incumbent carriers’ corporate travel base is key,” says Kenworthy. “Without a track record of consistency, reliability and punctuality this is difficult to achieve. Access to appropriate funding will always be a challenge for new carriers, given that the network carriers are serving myriad markets with a range of products and can source business on a global scale, being better placed to cope with seasonality and market/operational instability.”

The major advantages of running a business class-only flight are clear: convenience, comfort and exclusivity, facets that were sorely neglected by the likes of MAXjet, Silverjet and Eos, who all ran flights from non-core departure points such as Stansted and Luton. The benefits of business class-only flight, therefore, were lost, when flyers realised they’d have to travel out of their way to even board the plane.

Identifying demand
Although airfares have tumbled lately, a string of recent reports show the number of passengers opting for business class is beginning to creep up. The Global Business Travel Association (GBTA), for one, predicts that there will be a 7.1 percent rise in US business travel spending in 2014, assuming the economy continues to improve and businesses increase their spending in kind. What’s more, in July the GBTA found that US-originated business travel had grown just shy of three percent on an annualised basis, and expects the total amount spent to come to $292.3bn in 2014.

The market for business travel, therefore, represents a sizeable opportunity for carriers willing to hone in on the specific needs of high-end passengers. “It can offer a more personalised product and, through innovative ground handling, can offer a more seamless service,” says Kenworthy. “The model can be successful for some smaller unique corporate markets such as long-haul routes for the oil industry where there is little demand for more volume-based leisure travel.”

Taking into account the size of the market and the rate at which airlines are coming round to the idea, a major opportunity for business class-only carriers is looming large on the horizon. However, there is another factor at work here: the increasing polarisation of wealth in the twenty-first century.

The gap between what economy and first class passengers can afford is widening, and rather than feel the burn at the bottom end from increasingly cost-conscious customers, airlines would rather focus on higher earners with the means to fly up top.

Now that the stage is set for business class bookings to take flight, airlines are beginning to tussle for the acceptance of a new elite. Assuming the trend in business travel continues at the same pace, we could well see a new dawn for luxury travel and the reemergence of business class-only carriers.