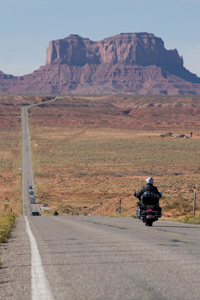 As I was walking my six year old to school down the very busy Massachusetts Avenue, he pointed at the all car fumes and quietly said, “You know mom, I don’t think there’s much we can do about global warming.”

Immediately I was concerned and curious that a young child could already sense the precarious state of the world and feel so hopeless. Later that day I had the same concerns expressed to me by an elderly woman who was similarly concerned about the decay of the planet she had seen in her lifetime and the serious environmental issues that her 20 grandchildren would face.

My retort to these two voices representing a complete generational spectrum was the same: we cannot be optimistic or pessimistic; we must be determined to make a difference. I heard this powerful nugget of wisdom at the conclusion of a troubling call-to-action talk about biodiversity, erosion and climate change by Astrophysicist Hubert Reeves at the annual Adventure Travel World Summit held in Quebec this October. Hosted annually by the Adventure Travel Trade Association (ATTA), the summit is a powerful, creative, exciting and productive gathering. It brings together diverse facets of the industry to network, collaborate and learn. Attendees are enabled to effectively and readily tap into the burgeoning potential of adventure travel.

Dr Reeves was one of many inspiring keynote scholars, environmentalists and business gurus addressing 500 delegates from the adventure travel industry. Their collective message really hit home for each of us: adventure travel matters.

This was the main point of ATTA President Shannon Stowell’s state of the industry address. Adventure travel companies create situations in which travellers experience transformation, discovery, cultural engagement and the miraculous web of life. We share with our clients our passion, wisdom and experiences that can change beliefs and the way we all interact with the planet. But, Shannon asked, would things be different if we were absent? Do we, as an industry, matter? His answer was a resounding yes: adventure travel matters now more now than ever before for three major reasons:
1. We are one of the few industries that intrinsically can achieve the ‘triple bottom line’ of people, planet and profit.
2. Because we are one of the few industries that deals in transformation, we create advocates – not just repeat customers.
3. More than ever, travellers are interested in the authentic and real; and interest in adventure travel is surging worldwide.

Having attended many of these summits and adventure conferences over the years, at this year’s summit I felt more empowered than ever. Perhaps it was Jeff Dossett, CEO of adventurelink.com, sharing his midlife mountain climbing epiphany – which led to him becoming the third Canadian in history to climb the highest mountain on each of the seven continents. Or maybe I was more inspired by Dr Wallace Nichols from the California Academy of Sciences, whose lifelong love of turtles and the sea led him to passionately promote his revolution that is helping save the planet and is making a difference. But the message rang loud and clear: as leaders in adventure travel interacting with literally millions of travellers annually, we are making a difference in the way people are experiencing the world’s most precious resource.

Adventure travel companies (and their guests and stakeholders) have a crucial role to play. Together we represent millions and millions of consumers worldwide. Bicycle tour companies, eco-lodges, adventure operators, outfitters, safari companies, rafting companies, diving companies, walking tours… the list goes on and on. But we know instinctively that as a group we affect millions of people in nearly every region on the planet with what we do.

We wholeheartedly embrace the clear vision of the ATTA. Ciclismo Classico is proud to be a part of a thriving community of responsible organisations who transform customers and businesses alike into advocates for sustainability and justice worldwide. And like Dr Reeves said, “Let us not be optimistic or pessimistic, but be determined to make a change.”

As you make your travel plans for next year, we applaud any decision to tread more lightly on the planet. While the economics of time might dictate otherwise, simplifying our lives by leaving all our stuff behind and interacting with the world in a simpler way with a member of the ATTA might just be the panacea many of us need to grow and create a new reality. As a tribe of travellers, let’s be determined to make a difference.