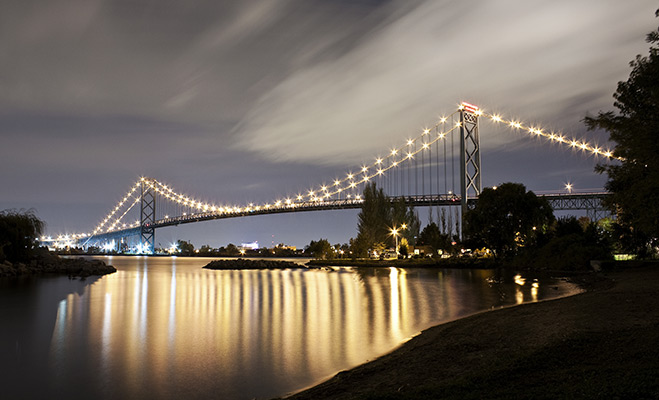 The Ambassador Bridge spans an international boundary over the Detroit River, dividing the automobile manufacturing hubs of Detroit, Michigan and Windsor, Ontario.

Completed in 1929, it is one of the most important commercial links in all of North America, dealing with an estimated $115bn worth of trade between Canada and the US every year. This represents about 25 percent of the annual merchandise exchange between the two countries and some 10,000 commercial vehicles pass over the bridge every day.

The only way
Because it is the only bridge between the two cities, high traffic levels create bottlenecks and lead to long waiting times at the international border, generating costs for the economies of both nations. Canada’s transport department estimates that truck traffic will triple over the next 30 years and while there is also a tunnel running beneath the river, it mostly handles passenger traffic. The existence of a single freight transport link also denies the Detroit-Windsor corridor a redundancy capability, should the 83-year-old bridge be closed down due to an accident or repairs.

A second bridge has been in the planning stages for years, but a concrete deal between Canadian Prime Minister Stephen Harper and Michigan Governor Rick Snyder was only announced in June 2012. The planned New International Trade Crossing (NITC) would be built at a cost of between $3.5bn and $4bn, and would connect Detroit’s Delray community with Windsor’s west end. Officials hope the link would be ready to open in 2018.

All costs associated with the project would be covered by Canada, including the construction of an interchange to connect the crossing to Michigan’s I-75 highway. A Canadian entity would also take charge of design, construction and operation under a public-private partnership agreement containing provisions for affected neighbourhoods on both sides of the border. To recuperate the costs of construction, the Canadian side of the bridge would charge a toll, while the US side would remain free.

Connecting businesses
Commenting on the project, Harper said: “This new bridge will reduce congestion at this critical Canada-US border crossing, support the creation of new export-related jobs and investment opportunities along the Quebec City-Windsor corridor, increase the competitiveness of the North American manufacturing sector, and provide thousands of construction jobs in Ontario and Michigan.” Snyder echoed the Prime Minister’s sentiment, saying in a release: “This agreement is about more than building a bridge, it’s about building a future of economic strength and security for families across our entire state.”

Business groups seem to agree with chambers of commerce and unions on both   » sides of the border, expressing support for a new trade link. A study from the Michigan-based Centre for Automotive Research claims the project would create some 22,200 jobs in the
state alone.

Manufacturers ship auto parts back and forth across the Detroit River multiple times during the manufacturing process and rely heavily on just-in-time delivery, making any border delay very costly. In 2010 alone, Canada shipped $29bn in parts and assembled vehicles to Michigan while $13bn worth went the other way. In a statement concerning the bridge, Sergio Marchionne, chairman and chief executive of Chrysler Group said that it “represents a tremendous opportunity to further strengthen the economies of the US and Canada, the future of our company and many other businesses”.

Troubled waters
Not everyone is happy. The Ambassador Bridge’s billionaire owner Manuel Moroun has vehemently opposed the construction of a public competitor to his river crossing. Moroun, who first bought the Ambassador in 1979, has spent some $30m in advertising costs trying to derail the project. His Detroit International Bridge Company collects about $156,000 a day in tolls from its ownership and operation of the asset and would likely see this amount diminish should a second route to and from Windsor become available. Moroun blames customs officials for any delays taking place on the Ambassador and says that his bridge still operates under capacity.

He has, however, offered to twin the Ambassador to double its capabilities, but the Canadian government rejected the proposal. Twinning would fail to bring in a redundancy capacity and, officially, Canada claims it wants to reduce traffic in Windsor, which twinning wouldn’t help. But discontent may also stem from concerns over Moroun’s bridge monopoly. After all, Harper had once called the idea of a private individual owning a major international border crossing “ludicrous”.

As part of the campaign against the NITC, Moroun’s companies provided funding for ‘The People Should Decide’ − a ballot committee supporting an amendment to the Michigan constitution, which would see all future international bridge or tunnel projects put to state and local referendums. Proposal six, as it is called, was backed up with fear-mongering adverts warning about the costs to the Michigan taxpayer. Counter-ads mocking Moroun were also run by ‘Taxpayers Against Monopolies’, a group supporting the new bridge but on a significantly lower budget.

Roy Norton, Canada’s consul general in Detroit, ridiculed the ballot initiative: “[Proposal six is a] cynical, manipulative effort mounted by [the] Morouns to persuade you to amend your constitution to deny yourselves transportation choice and preserve and protect their monopoly for some time into the future,” he told the Rotary Club in Bay City, Michigan.

At the time, legal opinion was divided as to whether the proposal could actually stop the construction of the bridge. It stipulated that a referendum would be required for “any bridge or tunnel which is not open to the public and serving traffic as of Jan 1, 2012” – a date significantly before the completion of the crossing. But the international agreement between Harper and Snyder anticipated opposition to the project and referenced the deal to be subject to Michigan law from “the date the Michigan Party became a Party”.

Safe passage
The proposal was eventually put to the ballot in November after it had obtained more than 600,000 signatures in support and the Michigan Supreme Court affirmed taxpayers’ right to vote on the issue. Voters however, rejected it by a margin of over 60 percent, dealing a blow to Moroun and removing a key obstacle in the way of construction. With Michiganders giving the go-ahead, all that remains (barring possible legal challenges from Moroun) is for the project to obtain presidential approval. Once this is secured, residents of both cities can finally look forward to both their long-awaited bridge and an end to Moroun’s monopoly.