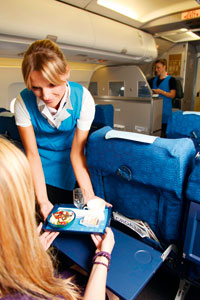 Croatia airlines is a medium-sized European airline in constant growth. this network carrier provides passenger travel services on short and mid-range flights in economy and Business classes. in more than twenty years of its existence it has connected Croatian cities with the most important European metropolises and thus with the entire world – the most represented markets are Germany (34 percent), Great Britain (10 percent), Austria (7 percent), Switzerland (7 percent), and France (7 percent).

Furthermore, the company operates flights within Croatia. the geographic-transit position of Croatia as a Mediterranean country at the air traffic intersection between southern, eastern, and central Europe benefits the plans of Croatia airlines which are focused towards meeting high market demands by maintaining all current destinations of regular travel and by expanding its flight grid toward southeastern European countries and strengthening of their position as the regional leader.

The product
the company is trying to maximally adjust its business to the demands of the market and its passengers by providing a quality service which is based on safety, punctual flights, knowing the market, and working together with established and well-known airline companies. In 2004 Croatia airlines joined star alliance – the leading global airline network. The fleet of Croatia airlines is very modern and consists of 13 aircraft: eight airbus (a319 and a320) and six Dash 8 Q400 aircraft.

In the flight cabin free food and beverages are offered and the in-flight service depends on the type of flight and time of day. Business Class passengers are offered a selection of domestic and foreign dailies and weeklies. For all the passengers Croatia Airlines publishes the in-flight magazine Croatia, where Croatian cultural and historical heritage is presented textually and with pictures. The magazine also features some of the destinations Croatia airlines flies to, as well as other interesting and entertaining topics.

The airbus aircraft are equipped with the most modern audiovisual systems which are used to inform passengers about the company and Croatia through informative movies. there are also movies promoting the need to protect special and endangered species. these include a film that promotes the dolphin project in the Cres and lošinj sea basin, a film about the lipizzaner stud farm in Đakovo, and film about the european stork village Cigoc.

For travel planning, the passengers have at their disposal the airline’s kind staff in Croatian offices, as well as foreign branch offices, and contact centre personnel (+385 1 6676 555). Furthermore, the Flyonline service offers online ticket purchase on the company’s web pages. Flyonline is constantly upgraded, with online reservation of tickets available in eight languages: Croatian, German, English, French, Dutch, Spanish, Russian and Italian. In order to simplify travel planning for passengers, they offer the Flight Planner service, enabling them to determine costs and browse destinations according to their individual preferences. the online service users have at their disposition the Flyonline Chat for all questions. Moreover, the website offers the possibility of web check-in, hotel accommodation and transfer reservation, the possibility of flight status check and ordering of duty free products that can be purchased aboard.

Since December 2004 Croatia airlines has been a star alliance member and participates in Miles&More –the greatest frequent flyer programme in Europe– offering its members numerous possibilities for collecting and redeeming miles, as well as many attractive privileges. Members collect miles by using the services of many partners in the programme. Miles are credited for flights of all star alliance members and other airline partners, but also for renting vehicles from partner car rentals or staying in participating hotels. After having collected a certain amount of miles, you can exchange them for numerous awards: award tickets, upgrades, various travel awards. Many privileges offered by the partners in the programme ensure the members travel as comfortably as possible.

Achievements
in over 20 years of existence Croatia airlines has won numerous certificates and awards. In October 2001, the company received the Jar 145 certificate from the German authorities – a licence of authorisation for aircraft base and line maintenance. in the middle of October 2004, the company was granted the EASA Part 145 permit, referring to standards that have to be fulfilled by an organisation authorised for aircraft and aircraft equipment maintenance. In December 2005, Croatia airlines again passed the highly demanding IOSA (Iata operational safety audit) flying safety testing for the second time and successfully renewed the IOSA certificate.

In February 2004 began the aircraft redesign, which was proclaimed one of 10 winners in the reBrand 100 award in May 2005 in Providence. In July 2007, Croatia airlines was awarded for the integration of online payment with the implementation of security standards verified by Visa and MasterCard secure code.

In May 2010 the company received another valuable recognition for the upgrade of business processes. The 2D BCBP certificate was given by the international air transport association and confirmed Croatia airlines’ platinum status in the introduction of the global Iata project named simplifying the Business (STB) for projects including the two- dimensional Bar Coded Boarding Pass. even before the designated deadline (end of 2010), Croatia airlines began issuing innovative two-dimensional bar-coded boarding passes for all destinations that have the necessary infrastructure. Furthermore, company employees regularly win the Croatian National Tourist Board Awards for the best employees in tourism in the air transport category.