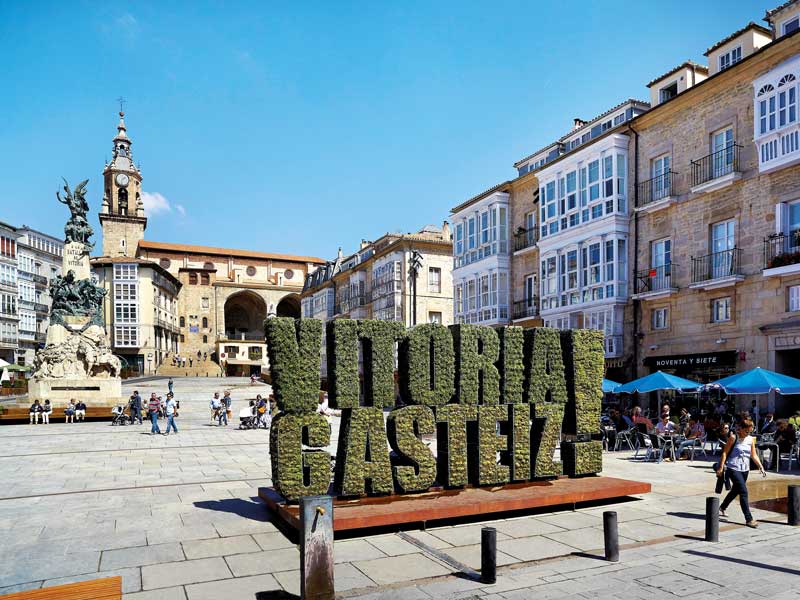 Dating back to 1181, Vitoria-Gasteiz is a compact and strategically located city in between the major metropolises of Madrid and Paris

This year, Vitoria-Gasteiz, the capital of northern Spain’s Basque Country, has played host to a number of major events. From sports tournaments to gastronomic and social gatherings, the city is becoming renowned for its international meetings and conferences.

Dating back to 1181, Vitoria-Gasteiz is a compact and strategically located city in between the major metropolises of Madrid and Paris. It is a city whose citizens boast a high quality of life, with a high ranking on the Human Development Index due to the prevalence of local amenities. Vitoria-Gasteiz is also a business-friendly city, with an economy based heavily in industry. The area is home to the manufacturing facilities of companies such as Mercedes-Benz, Michelin, Gamesa and Heraclio Fournier.

Green credentials
So far, 2019 has been a transformative year for the city, with Vitoria-Gasteiz successfully hosting a series of major conferences and top-level sporting events. However, business is not the only field in which Vitoria-Gasteiz excels, as sustainability has always been an important part of the city’s identity.

In fact, in 2012, the European Commission named the city the third ever European Green Capital. Vitoria-Gasteiz was recognised for its high proportion of green public spaces and community gardens, its efforts to reduce water consumption and its measures to increase biodiversity.

In March, the city’s Europa Congress Palace hosted the second gathering of the International Network of Michelin Cities, an organisation aimed at developing public and private partnerships between cities where the French multinational Michelin has a factory. The event brought together 140 attendees from 26 cities in 17 countries with the aim of encouraging them to work together to build municipalities that are more inclusive and respectful of their natural environment, while providing a better quality of life. In this forum, Vitoria-Gasteiz presented its development model, which combines tradition and industrial innovation with respect for the environment.

Through the grapevine
Tradition also collides with the natural world in Vitoria-Gasteiz in the form of its world-renowned wineries. Just a few kilometres south of the city is the beautiful Rioja Alavesa region, along which nearly 400 wineries can be found, in addition to numerous restaurants, hotels and wine cellars.

As evidence of the region’s prominence in the industry, Vitoria-Gasteiz hosted the 2019 International Wine Tourism Conference, Exhibition and Workshop. More than 250 participants from 20 countries, including wine tourism professionals, tour operators and travel agencies, gathered in Vitoria-Gasteiz and the nearby Rioja Alavesa region for the event.

The programme, held at the Europa Congress Palace, included presentations from innovators and marketing experts, as well as professional development networking opportunities, a large exhibition and trips into the heart of the wine-producing region to view the best that the Basque Country has to offer. A highlight of the conference included a masterclass run by award-winning wine writer Sarah Jane Evans. As one of the sector’s most anticipated events, the conclusions drawn at this conference serve as a highly respected guide to the industry.

Vitoria-Gasteiz is not only a place for wineries and green spaces, however. In May, the city hosted the Turkish Airlines EuroLeague Final Four, the continent’s largest basketball competition. The tournament was held in the Fernando Buesa Arena, which has a capacity of more than 15,000 spectators.

In welcoming the EuroLeague to the city, Vitoria-Gasteiz added its name to a list of major European capitals – Belgrade, Istanbul, Berlin and Madrid – that have played host to the prestigious tournament. The event’s arrival in Vitoria-Gasteiz also recognised the long history of the city’s local team, Baskonia, which is one of Europe’s top basketball clubs.

On behalf of the city, region and country, Vitoria-Gasteiz has demonstrated its impressive organisational ability while showcasing the charms of the Basque Country and its long cultural and sporting tradition.