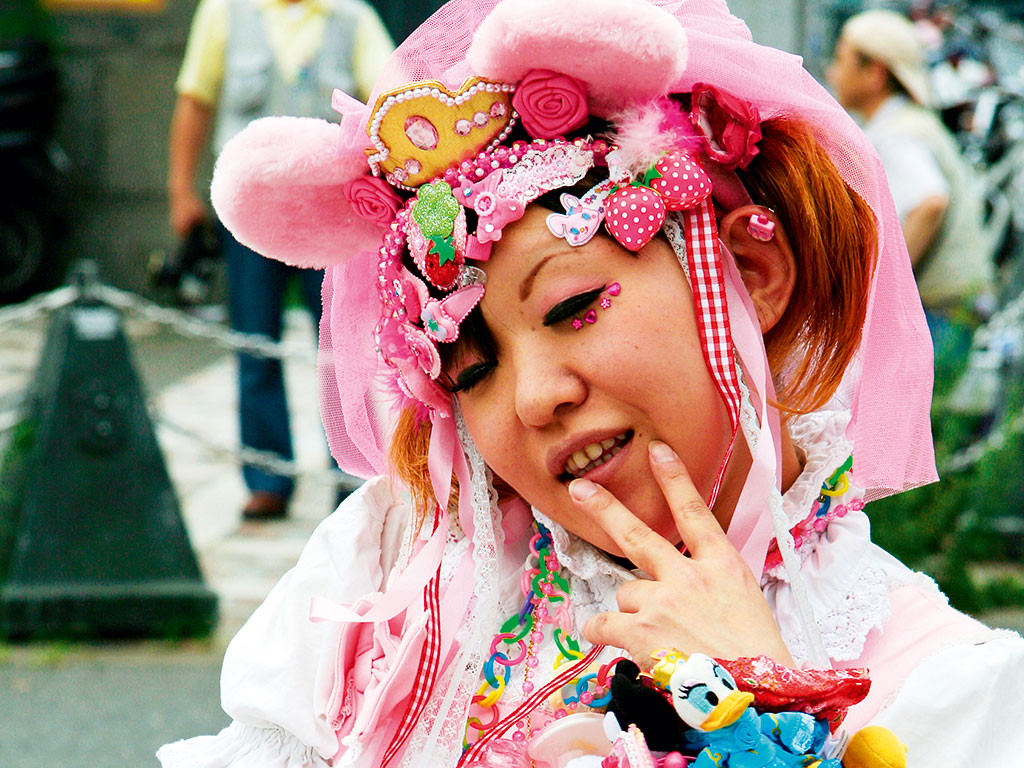 In Tokyo, tradition mingles with pop culture fantasy. Palaces of ancient dynasties dot the city, the spaces in between filled with countless karaoke bars, modern architectural wonders, and curious clubs. The Tsukiji fish market bustles with the latest catch, while botanists work to keep the Sumida River’s promenades lined with blooming cherry blossoms.

Every year, over nine million tourists travel to Tokyo, spending an estimated ¥9.4trn, and even more are expected in the run-up to the city’s 2020 Olympic Games. Their footsteps have carved tourist paths across the city, riddled with cheap trinkets and overpriced entry fees. Yet there are countless roads less travelled. It’s relatively simple for visitors to immerse themselves in the true, ever-evolving nature of Japanese culture – if they know where to look.

Love shack
With over 13 million inhabitants, it’s hard to imagine Tokyo ever slumbering. Yet for the Japanese, sleeping has evolved into a complex ritual. Inemuri, the art of falling asleep on the job, is seen as a serious gift bestowed upon very few. Visitors find themselves attempting to chat with a local worker who may be on the clock, but is actually in a deep sleep. There are rules to inemuri, which is subtly encouraged on the highest and lowest rungs of the social ladder: workers must remain upright, and power naps can’t endanger others. Catching a quick snooze on the job proves an employee’s work ethic. After all, it’s difficult to argue you could work harder when you’re passing out from sheer exhaustion.

However, there are plenty of accommodation options that don’t include falling asleep upright. Many of these also address another simple pleasure: human contact. Last year, Tokyo’s eccentric Akihabara district was made decidedly more eccentric following the opening of Soine-ya, a ‘co-sleeping specialty shop’ where lonely people pay to cuddle with female staff. An evolution of the ‘maid café’ phenomenon, the shop is strictly non-sexual. The price list offers anything from a 20-minute nap with a woman to a full, 10-hour night’s sleep. For an extra ¥1,000, customers can fall asleep in the girl’s arms, or have her pat them on the back as they rest. Soine-ya even allows picky customers a special shimei-ryo service, where cuddlers fork out an extra ¥1,000 to pick their favourite girl. Just three minutes’ walk from Akihabara station, the cuddle café offers a surreal insight into the Japanese search for new sources of intimacy within the confines of increasingly congested cityscapes.

Where to stay
For those who already have a cuddling partner, and are wondering where to stay, there are distinctly different short-visit options. It’s no secret that privacy is hard to come by in Tokyo and entrepreneurs have recently found success converting standard bargain hotels into ‘love hotels’. Identifiable by neon love-heart signs, Japan’s 37,000 love hotels offer hourly rates to couples who may have more than cuddling in mind. Reservations aren’t common, entrances are discreet, and interaction with hotel staff is minimal. In higher-end love hotels, the bill is even settled via pneumatic tubes, cash machines or an anonymous pair of hands that appear behind a pane of frosted glass. The rooms themselves are far more opulent than one would expect, featuring jacuzzi baths, mood lights and optional music. Most love hotel rooms maintain temperatures of around 100F degrees, encouraging guests to strip down sooner rather than later.

Tokyo is Japan’s fashion capital, and the prefecture’s trendiest districts have each spawned a plethora of vibrant aesthetics

Cosplay
A contraction of ‘costume’ and ‘play’, cosplay devotees dress as their favourite manga or anime characters. From Sailor Moons and Van Helsings to robots and maids, fans take hours perfecting their looks, with many eventually showing off their creations at one of Tokyo’s massive cosplay conventions.

Lolita
Encompassing numerous sub-themes, lolita is one of Japan’s most recognisable fashion exports. Creepy to some, cute to others, lolitas wear knee-high socks, puffed-out skirts, petticoats, and ringlets. Kodona, or ‘boystyle’, is a more masculine take on the look, based on Victorian boys clothing.

Fairy Kei
Fairy kei is an evolution of decora, a late-nineties’ look involving tutus and neons, which gained massive popularity in Europe. Fairy kei introduces kawaii-style items, such as My Little Pony, Hello Kitty and Barbie into outfits, often in the form of plastic necklaces, childrens’ hair clips and teeny backpacks. Pastels and hot pink are the colours of preference.

Don’t worry if you’re not going to be able to make it to Tokyo any time soon; cinema has a long-standing love affair with the city

Tokyo Story (1953)
Yasujiro Ozu’s 1953 masterpiece tells the story of an elderly couple from the country who visit their children, only to find they’re too wrapped up in their urban lives. Ozu paints a portrait of a changing family unit, a changing city, and a changing Japan. It’s a mirror held up to relentless post-war modernisation.

Lost in Translation (2003)
Yes, critics argue it’s a culturally reductive film about nothing, but it made a star of the Park Hyatt’s sky bar and left many hoping, as they checked into a quiet Travelodge, that they might meet their own Scarlett Johansson in the lobby. It’s a story of twenty-first-century alienation set against the bars of Tokyo.

Enter the Void (2009)
This film won’t be enjoyed by all, but persevere – Gaspar Noe’s triumph of cinematic bodily effectivity relies on Tokyo’s cramped streets, nightclubs, and neon signage to facilitate a remarkable trick of narrative perspective. The story is viewed from the disembodied eyes of Oscar, whose early death leaves him free to float through the film.

seats in the New National Stadium, designed by Zaha Hadid

was the last time Tokyo hosted, after WWII meant the 1940 games were cancelled

has been set aside to fund the event

Not everyone is lucky enough to find companionship. After striking out in one of the city’s karaoke bars, lonely revellers may want to spend the night in a capsule hotel. This basic accommodation sees guests pay extremely low rates in return for an extremely small room – though it’s hard to say whether these tiny chambers actually qualify as rooms. For around ¥2,000 per night, customers rent out a modular fibreglass block measuring only 2.5 cubic metres. Each hallway is lined with stacks of the capsules, which share communal washrooms and other entertainment facilities. Most capsules include a small television and wi-fi connection, and some of the more extravagant venues make up for their minimalist ‘rooms’ by lavishing on over-the-top lobby designs. It’s actually become a recent obsession among Japanese architects to show off just how creatively they’re able to utilise these tiny spaces. Capsule-goers are eagerly awaiting the launch of 9h, Kyoto’s first luxury capsule hotel with four-star aspirations.

The land time forgot
The outskirts of Japan’s metropolises have much more to offer than peculiar accommodation. Tourists are venturing further out of the cities to seek solace in nature. Yet the desire to explore Tokyo’s forests is more macabre than meets the eye. At the northwest base of Mount Fuji rests the rambling Aokigahara forest – also known as ‘the sea of trees’. The 35sq km forest is home to rolling hills, icy caverns and rare species. It’s also the site of the second-highest number of suicides in the world (after the Golden Gate Bridge in San Francisco).

Every year, around 30 people enter the forest and never re-emerge. Since the global economic crisis the annual figure has spiked; in 2010 247 suicide attempts took place in the forest, although only 54 were successful. Some locals try to group those who enter the woods into three categories: the outdoor-savvy trekker, those searching for a good ghost story, and those who will end their lives. The number of those visiting the eerie woods in search of ghosts has risen significantly, and locals now sponsor an annual body hunt.

Further southwest, foreigners can explore the inner workings of a similarly spooky site: Japan’s Ghost Island. One of 505 uninhabited islands off the coast of Nagasaki, the metallic Hashima Island was once home to 5,200 coal miners employed by Mitsubishi. As the island stands at a tiny 61,000sq m, it was one of the most densely populated plots of ‘land’ in human history. Yet in 1974, Mitsubishi announced the immediate and unexpected closure of the island. Overnight Hashima turned into a ghost town.

Now, it’s been thrust back into the spotlight. After appearing in the James Bond film Skyfall, Ghost Island is attracting lots of tourists. A company called Gunkanjima now offers ten ferry rides to the island every day from Nagasaki. Less insidious than Hashima is the opportunity to visit Hiroshima’s Peace Memorial Museum. The site receives around one million visitors every year, who come from around the globe to see the documented atrocities of America’s nuclear attack on the city during WWII. Now a monument to the woes of nuclear armament, the peaceful museum grounds stand in stark contrast to Hiroshima’s bustling centre.

For the love of food
Not all of Japan’s museums are so sobering. Hidden deep within Tokyo’s Shin-Yokohama district, food lovers find a jovial celebration of Japan’s relationship with ramen noodles. The Shin-Yokohama Ramen Museum not only features an intensive, multimedia display charting the illustrious history of this go-to meal, but it even allows visitors to wander through a life-size replica of Tokyo’s streets circa 1958. There, ramen lovers are immersed in the atmosphere that allowed the addictive noodle dish to redefine the nature of street food.

Yet, as Tokyo’s old town revels in tales of food’s past, a new Osaka dining chain is focused on a peculiar vision of food’s future. In 2002, Mr Kanso launched with the idea that diners don’t require fancy service or pretentious ingredients to have a good time – all they need is a couple of tins of cold food and some plastic cutlery. Oddly enough, they were right. Mr Kanso now boasts 17 locations across the country. The concept is simple: there are no menus, instead, Mr Kanso’s walls are lined with 300 varieties of tinned food from across the globe – from Hokkaido bear curry to Heinz beans. Many customers say it’s this oddball variety that keeps them coming back. However, this exciting concept pales in comparison to the way in which food in Tokyo is caught.

There is no fishing technique on Earth as dazzling as the ancient art of ukai, or ‘fire fishing’. Wooden fishing boats set fire to the river, and then set loose dozens of aquatic cormorants that stow scores of sweetfish in their elongated beaks. Since 1300, Japanese fishermen have engaged in this bizarre practice on the Nagaragawa River. Today, ukai is mostly practised by traditionalists in small villages. In Gifu and Kyoto it’s even possible to board one of these vessels and experience the hunt first hand. For those less inclined to join in, opulent dinner cruises now follow ukai fisherman during the summer months, averaging around ¥3,500 per diner.

Naked ambition
Japan may be renowned as a society of workaholics, but it’s also home to some of the world’s most eccentric festivals. Hadaka Matsuri takes place on the third Sunday of each February. Over 9,000 men gather at the Saidai-ji Temple to battle for custody of a sacred, luck-inducing pair of sticks. As a part of the 500-year-old ritual, men arrive at the temple dressed in nothing but a fundoshi (loin cloth). After recitations of ancient incantations, a priest tosses the sticks into the crowd and chaos ensues. Whosoever grabs the sticks and thrusts them upright into a rice-filled box is promised one year of happiness. It’s free to participate in the event, but the struggle for the lucky sticks often ends in bloodshed.

Japan is a land of surprises. The architectural contrast on each winding street lets visitors travel centuries through time, while each activity on offer is more peculiar than the last. Everyone’s familiar with the Imperial Palace, and they’ve all seen Tokyo’s faux Eiffel Tower. The real Japan is everything in between. The country doesn’t boast a stone-cut cultural identity – that’s what makes Tokyo’s most well-hidden cultural quirks so quintessentially Japanese.