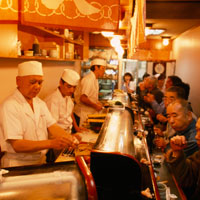 The dazzling Tokyo skyline is perhaps a statement of intent; the mainstream culture of conspicuous consumption that ensconces the city’s leading lights declares that everything has to be new and wonderful and that last year’s gadgets were little more than a craze.

Perhaps, though, this is just a facade, and if you explore more deeply the hidden pathways of this sprawling metropolis you will discover a little of the old man from which it spawned; ancient pagodas, small Japanese markets and colourful neighbourhood festivals. When Michelin released their first Tokyo guide in 2008 they made it the most delicious city on Earth, dishing out 151 of their coveted stars – twice as many as the much-eulogised Parisian gastronomic scene.

Like any world city, this is a pulsing financial centre and a cultural hub. What really sets Tokyo apart though is the impeccable efficiency and style with which it goes about its business. Whether you want old or new, east or west, work or play, everything here is fabulous.

Where to stay
The Park Hyatt in Shinjuku has a world class reputation for its outstanding design and superlative levels of service. The Peninsula is another award winner, with spacious rooms that feel like luxury apartments and fantastic city views.

Where to eat
The divine Kaiseki cuisine at Takamura is a must if money is on barrier; alternatively, the nouvelle Japanese flourishes of Nobu Tokyo are a gastronomic delight. The avant garde interiors of Shibuya and Shinjuku are as impressive as the food.

What to see
The Asakusa temple was founded in 645 by three fishermen who found a statue of Kannon, the Buddhist god of compassion. Kabuki-za Theatre showcases a traditional art form with medieval roots and often Burlesque overtones.