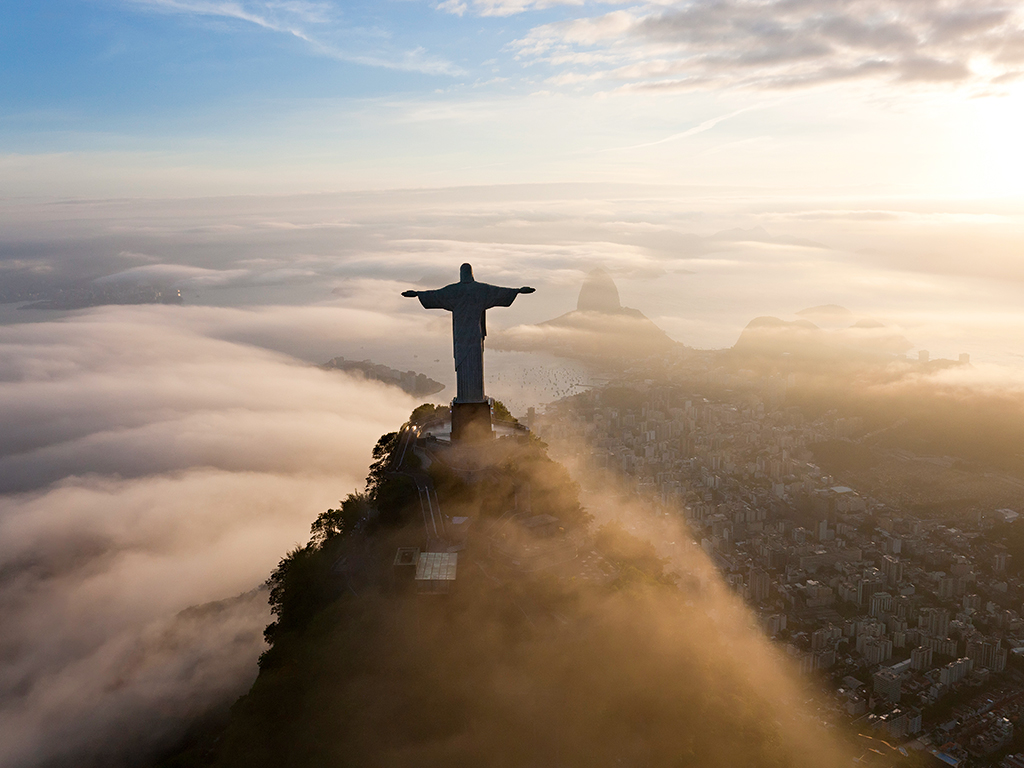 An aerial view of Christ the Redeemer, Rio de Janeiro. Brazil hosts a whole range of exciting destinations to visit, including the city of Recife and fishing village Trancoso

Living up to its reputation as ‘the country of football’, all eyes were on Brazil as it celebrated hosting the 2014 FIFA World Cup. Final figures have been released by the Brazilian Ministry of Tourism and show that the number of international visitors to the country during the 2014 FIFA World Cup far surpassed Embratur’s expectations of 600,000. An additional one million foreigners from 203 countries travelled to Brazil between May 23 and July 13.

Though the tournament has created a legacy and will have global repercussions for Brazil, the country is gearing up to host the next mega event, the 2016 Olympic and Paralympic Games, where attention will turn to the city of Rio de Janeiro. The World Cup has already given us a taste of what Brazil has to offer, but there are plenty more must-visit destinations around the country.

Recife
Recife is Brazil’s fifth-largest city and is the capital of the State of Pernambuco. Nestled in the heart of northeast Brazil, Recife boasts near-perfect weather all year round, with hardly any harsh weather extremes and an average temperature of 25°C, making this coastal city the perfect choice for a winter sun holiday.

Known as the ‘Venice of Brazil,’ Recife is a city of water – from the long stretches of beautiful sandy beaches to the waterways dissecting the city, tranquil aquatics are all around. One of the best ways to take in this city is to take a boat trip along the Capibaribe River and soak up the beautiful architecture, the traditional rhythmic music that seems to constantly resonate around the streets, and the general hustle and bustle going on around you.

The beautiful colonial town of Olinda, now considered a district of Recife, provides a laid-back alternative to the busyness of central Recife. A maze of cobbled streets with white churches, pastel buildings and leafy squares, Olinda is a picturesque place to while away a lazy afternoon. In 1982, Olinda was designated a UNESCO cultural heritage site and has both retained its colonial feel and adopted a bohemian atmosphere as a varied arts and culture scene has grown.

Rio de Janeiro
For a more cosmopolitan break, head to Rio de Janeiro. Not only does the city offer an array of world-famous beaches, such as Copacabana and Ipanema, but you can also take the iconic cable car ride up to Sugarloaf Mountain and take in the breathtaking views of the city.

As Rio prepares to host the 2016 Olympic and Paralympic Games, new museums and attractions are opening up all the time. Rio showcases the country’s best food, from typical Brazilian cuisine and steakhouses, to gourmet spots and seafood restaurants.

Paraty
Paraty is one of Brazil’s prettiest little colonial towns and is located in the state of Rio de Janeiro. Filled with small boutique shops and art galleries, Paraty has a bohemian atmosphere, but is also a traditional fishing village.

Paraty retains an intimate feel with small cobbled streets and beautifully preserved building facades. The streets come alive at night as the small bars and restaurants fill up, with both locals and tourists spilling out onto tables on the street.

Trancoso
This sleepy fishing village has quickly become the most chic Brazilian holiday destination. Beautiful beaches are just the start of the appeal of Trancoso, a destination that now attracts the international jet set, and boasts some of the best restaurants outside of Rio and São Paulo. Luxury shops and pousadas have sprung up, but Trancoso maintains a quaint low-key atmosphere, where locals and tourists can mingle and enjoy each other’s company.