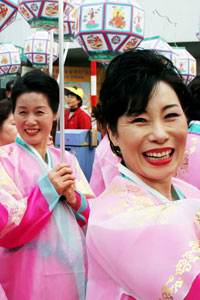 South Korea is a subtropical peninsula of misty mountains, towering skyscrapers, precipitously-positioned pagodas and rocky coastal islands. The capital Seoul, known as the ‘miracle on the Han’, is not only a world leader in design and architecture but a buzzing, vibrant city of old-fashioned bazaars, crazy neon lights and 1001 other things all vying for your attention. Yet through twenty national parks, millions of acres of mountain and forest filled with hidden temples and ancient tea terraces a more peaceful, mystical countryside would be hard to find.

It is still technically at war – the government never signed the 1953 armistice at the end of the Korean War and low level military clashes still occasionally occur. Despite this, South Korea has earned its status as one of the four ‘Asian Tigers’ and is an active member of the G20 economies. It has a strong base in high-tech industry and has been ranked most innovative country in the world in the Global Innovation Index.

The people are forward and outward looking, though Confucian influences are still heavy and there is a strong hierarchical sense of ‘face’ and respect. Businesses are built around relationships; cultivating understanding and avoiding confrontation are both essential and it may take many meetings or trips before any business deal can be concluded. Once built, however, South Koreans strive for the mutual success of any business contact and such relationships can bring rich reward in the long run.

Incheon International Airport takes long distance international flights; one hour by bus from Seoul. There are several other airports taking flights from Asian neighbours. Ferries connect to China, Japan and Russia. The border to North Korea is closed.

Domestic air travel is good for city hopping; fares are generally reasonable. The train service is excellent but has limited coverage; buses have a greater coverage and are regular and efficient.

Business etiquette: It is important to greet and say goodbye to each person at a meeting. Greetings are usually short bows though handshakes may follow. Introduction through a third party is crucial. Relationships take time to build and often involve considerable socialising. Avoid giving criticism. Sensitive matters should be raised through the third party with whom the introduction was initially made.

Tipping: Tips are not expected.

Safety: Stay away from the North Korea border as military action is possible. There is a low level of crime.

Laws: Seek legal advice over working visas before entering the country as disputes are common.