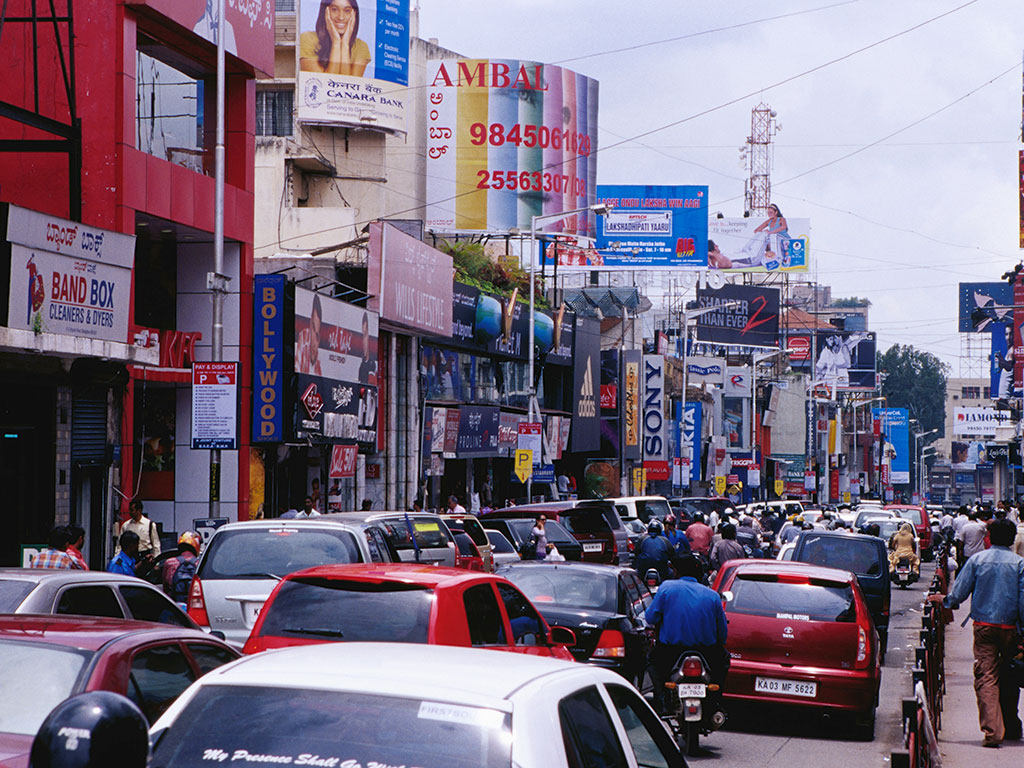 A traffic jam in Bangalore. Congestion in the city - which has been described as India's Silicon Valley - is thought to be costing it $6.5bn every year

Bangalore, India’s third largest city and its answer to Silicon Valley, can take a considerable share of the credit for the nation’s economic revival in recent years. But city infrastructure has failed to keep pace with the rapid influx of residents to the state capital, and the result is an agonising and perpetual state of gridlock.

[T]he annual cost of congestion to local IT and business process outsourcing (BPO) companies to be a staggering $6.5bn every year

Ask any Bangalorean what life is like in the city and, though responses may vary, a recurring theme will quickly emerge: something must be done about the traffic. During peak hours, the average speed on main roads is a paltry 15km per hour, earning the city sixth place on IBM’s 2011 Commuter Pain Index – ahead even of its densely populated big sister, New Delhi. Bangalore has a road density of 8.2km per square km, compared with 21.6km per square km in the capital, yet vehicle density in the two cities is similar. According to the Bangalore City Traffic Police, vehicular population increases at a steady rate of 7-10 percent annually, meaning the majority of the city’s roads are now operating above capacity.

A rough estimation by Quartz found the annual cost of congestion to local IT and business process outsourcing (BPO) companies to be a staggering $6.5bn every year. This was calculated by multiplying the total number of employees in those industries (400,000) by the total time each employee spends on the road (470 hours per year), then multiplying that figure again by average hourly revenue per employee.

However, the financial costs of traffic are only part of the problem. Enduring constant traffic jams is stress-inducing, not to mention the impact congestion has on air quality in particularly busy areas. On one occasion, an ambulance carrying a two-year-old girl with respiratory problems took more than two hours to travel to a hospital just nine miles away. The girl was unfortunately pronounced dead on arrival and, while extreme, this situation is not as rare as one might hope.

Steps are being taken in an attempt to combat the problem. Ambulances have begun parking at central intersections during rush hour to give them a head start, and a motorcycle ambulance scheme was launched in August. Equipped with just a small medical kit and oxygen cylinder, the treatment they are able to provide is limited, but it’s a start.

In keeping with the city’s tech-orientated development, Android application BTP Traffic Info App gives users live traffic updates and allows them to submit their own reports of accidents and jams, among other services. Shree Manu, developer of the app, says that, while the city is starting to see infrastructure developments such as the widening of roads and construction of underpasses, continuously rising vehicle density is offsetting the progress.

This alone is not enough. Urban planners must look to the example set by other cities to find a solution. London’s implementation of the £11.50 per day congestion charge in 2003 has reduced traffic levels by 10.2 percent, according to Transport for London (TfL) figures. Zipcar, a US-based car pooling service is growing in momentum, and a similar scheme in Bangalore, even one operating solely amongst colleagues, is an option. Bike schemes in more than 600 cities around the world have been hugely successful and further investments in public transport, still a work in progress, would encourage people to drive less. “Construction of the Metro is continuing and when it is completed, I think Bangalore traffic will come down by at least 30 or 40 percent,” added Manu.

There have, of course, been less effective initiatives over the years. In Mexico City, cars are limited to driving on certain days based on their license plate numbers. To circumvent the system, citizens purchased additional cars to accrue a variety of license plates and the scheme, in fact, had the opposite effect. Both congestion and air quality failed to improve.

Significant responsibility lies with the government and its urban planners. However, if Quartz’s findings are accurate, it could be in the best interest of the city’s biggest IT and BPO businesses to invest in infrastructure. As the saying goes: spend now, save later.