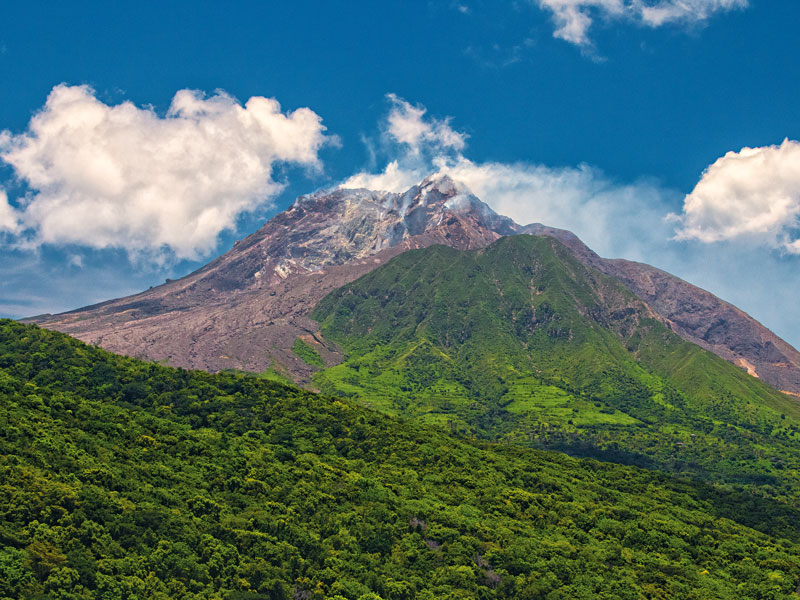 The Soufrière Hills volcano erupted in 1997, burying Montserrat's capital city in ash. The volcano is now a popular tourist attraction.

Montserrat has an unconventional capital city. Buried by a volcanic eruption in 1997, Plymouth is often described as a modern-day Pompeii. Visitors can walk among the half-buried buildings and see remnants of life from before the eruption, now frozen in time. Montserrat has several high-quality volcano-inspired attractions that are a must-see when visiting.

The Montserrat Volcano Observatory constantly monitors the Soufrière Hills volcano and has a visitor’s centre and lookout balcony. From the observatory you can see the glaring contrast between the buried capital, which remains submerged in ash, and the greenery of the island’s habitable areas.

At the Hilltop Coffee House you can relive the volcanic eruption by watching David Lea’s documentary and taking a look at memorabilia rescued from the buried city. A tour of the geothermal plant demonstrates how the locals are harnessing volcanic energy to produce their own electricity.

You can learn about the history of Montserrat at the Montserrat National Trust. Here you will find a simulation of Plymouth before the Soufrière Hills eruption, a small library and a gift shop. There are also walking tours of the botanical and herb gardens, which house a recreated Amerindian garden. And don’t forget to grab a cup of coffee at the Odd Cup Cafe before you leave.

A stop at the Runaway Ghaut ravine, located close to the National Trust, is not to be missed: legend has it that anyone who drinks from the cool spring water flowing from the mountain is destined to return to Montserrat.

A photo stop at the Montserrat Cultural Centre in Little Bay is also recommended: built by George Martin, former producer for The Beatles, it includes a wall of fame exhibit, featuring bronze handprints of famous musicians who recorded their music in Montserrat during the 1980s, including Elton John and Paul McCartney.

Calling adventurers
Adventure seekers will enjoy the nine world-class hiking trails covering the north of the island, mainly in the Centre Hills. Spot one of 34 species of birds that inhabit the island, including Montserrat’s national bird, the oriole, or look to the ground for the rare galliwasp lizard.

Montserrat boasts some of the Caribbean’s most beautiful coastlines. Beach lovers can sunbathe on one of the island’s private black sand beaches or take snorkelling or diving trips. Montserrat’s volcano has made the coral reefs and underwater ecosystem healthier than ever. More intrepid visitors can hire a kayak and explore Rendezvous Beach, the island’s only white sand beach. Many yachters also call on the island, anchoring safely at Little Bay in the north of the island.

Year-round celebrations
Montserrat comes alive during its many unique events, including the ever-popular St Patrick’s Festival. The week-long celebration highlights Montserrat’s local culture and Irish heritage, culminating on St Patrick’s Day. Montserrat is the only country other than Ireland where this is a public holiday, and the tradition harks back to when Irish settlers first colonised the island in 1632.

In mid-July, there is the Calabash Festival, which was named after the fruit and has long been identified as one of Montserrat’s cultural icons. At the end of July, the Cudjoe Head Festival is held, showcasing the island’s African ancestry. November plays host to the Alliouagana Festival of the Word, a literary event that brings together acclaimed writers and readers from all over the world.

As the end of the year approaches, anticipation for Carnival, which runs from mid-December until New Year’s Day, builds. Carnival is a vivid and colourful celebration of Montserrat’s wealth of culture and talent.