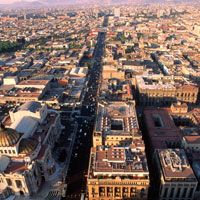 The great Aztec City of Tenochtitlan once stood on this antiquated lake bed, but after suffering widespread destruction during a 16th century Spanish siege it was rebuilt according to colonial standards. The name Mexico City became official in 1585 and it has served as the national administrative, economic and cultural capital ever since.

A kaleidoscopic barrage of sights and sounds, from ancient Aztec temples to lucha libre wrestling, Mexico City can feel somewhat overwhelming on first arrival. But what’s surprising is just how much there is to this great metropolis once you dig beyond the surface. Only New York, London and Toronto have more theatres and no city has more museums; the Autonomous University of Mexico is seen as the best Spanish-speaking university in the world.

It can take a little time to get your bearings and adapt to the chaotic pace but you’ll soon find real depth to add to the city’s surprising good looks and charm.

Where to stay
The stunning Four Seasons provides top class service and comfortable, well-furnished rooms. The more modest Hotel Del Principado is a surprise hit with many business travellers, a home away from home in an excellent central location.

Where to eat
Top Mexican chef Patricia Quintana’s restaurant Izote is first choice for many local foodies, with many modern versions of pre-Hispanic dishes. The food at Oh Mayahuel is as unusual as it is good – try the dried grasshoppers or fermented agaves; simply divine.

What to see
The impressive National Palace is one of the oldest buildings in the city, incorporating several eras of architectural influence as it has been altered and expanded. The National Museum of Anthropology is a fascinating testament to cultures past and present that have made Mexico what it is today.