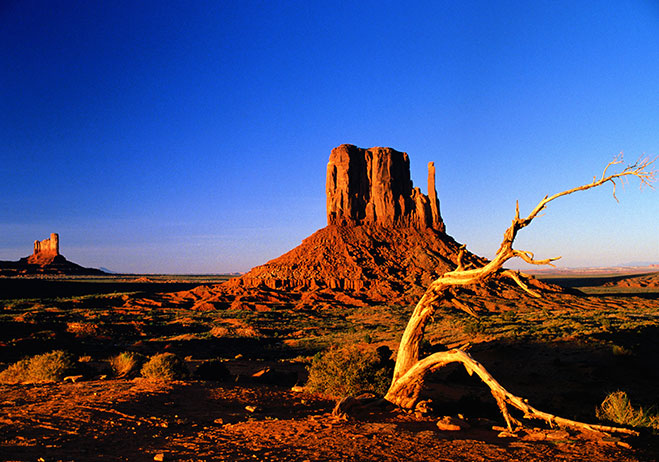 The infamous – and now decommissioned – Route 66 runs a bit like a conduit thread through the film. Parts of it are now the Interstate 40 (I-40), but bits are just wasting away in the desert, not leading anywhere. Valentine, Arizona, however, where Wyatt and Billy have lunch with a farmer and his wife, is still on the old route, but it really doesn’t go anywhere apart from rejoining the I-40 at Seligman. It is still possible to ride another few miles down 66 from Seligman, just ask locals for the Crookton road, which eventually rejoins the interstate anyway. The Route was an important transport link between Chicago and LA before being totally decommissioned in 1974. It was also an important cultural symbol of the 50s and 60s as the counterculture movement championed the freedom of the open road and free-spirited independence. Easy Rider has a lot to do with that.

At the old town of Bellemont, just off the I-40, the Original ‘No-Vacancy’ motel sign still stands right beside a Harley Davidson dealership. Wyatt and Billy ride customised vintage WWII models painted by iconic bike designers in LA. Billy’s has a fire theme that goes with his Native American buckskin trousers and bushman hat; Wyatt’s has the Stars and Stripes painted on the gas tank, which is why he is sometimes referred to as Captain America.

‘Get a haircut!’
Also in Bellemont is the Pine Breeze Motel, where Billy and Wyatt get turned down and helpfully advised to ‘get a haircut’. It’s more of a gas station now, though the back building is still there. It is also unlikely you will be turned down for having long hair today. Rumour has it that the current owner of Pine Breeze allows people to camp in the old building, where Billy and Wyatt could not. For less adventurous riders, the Americana Inn a few miles back in Flagstaff, where the crew stayed during production. True Easy Riders devotees can ride past Bellemont and try to camp by the side of the road like our protagonists were forced to do.

Head out of Bellemont towards Flagstaff, you can rejoin the historic Route 66 just before the town, but make sure to take Route 89 out of town towards the Wupatki National Monument. This is a desert national park scattered with ancient ruins of Pueblo settlements. There are three main Wuptaki buildings (the word means ‘tall house’ in Hopi) and a further 29 structures scattered around the national park. The most visited of them, the Wukoki ruins is certainly worth a stop. A long passage of the film was shot along the scenic drive through the national park.

Every film relies on a certain amount of suspended belief on the part of the viewer, and sadly one of the consequences of following the Easy Rider route, is that some of the fantasy is shattered. In the film, Wyatt and Billy ride out of Flagstaff, get gas and pick up a hippie hitchhiker at the Sacred Mountain Gas station on Route 89. The station is still there, but it’s a private home now. From 89, they turn off at Highway 160- the Navajo Trail. In the film this trail leads the riders to Wuptaki National Monument, but in reality, that is a good few miles back towards flagstaff.

Navajo Nation
The Navajo Trail does however, lead to Monument Valley, one of the most iconic settings of the American Mid West. Turn off Highway 160 in Kayenta and ride down the Scenic Highway 163 into the National Park and toward Utah. The ride between Flagstaff and Kayenta is through a dusty bit of desert with not much to see past Wuptaki, but the rider’s reward comes in the shape of giant monolithic mountains emerging from the red earth in Monument Valley.

These five square miles of desert in Arizona-Utah state line around the Highway 163 pretty much define what popular culture imagines the Wild West to be, because it has been the setting to so many films and pictures. The Valley is a part of Navajo Nation reservation in the Colorado Plateau. The main attractions at the valley are the buttes that rise up from the earth to a height of up to 1,800m, the layers of sediment varying in colour from deep read to blue-grey. Some of the buttes are as wide as mountains and look like giant tombstones lost in the desert; some are narrow like the fingers of the Navajo Deities pointing to the heavens.

If you take the trip, for maximum effect ensure you have a hippie riding behind you while listening to The Byrd’s ‘I wasn’t Born to Follow’.