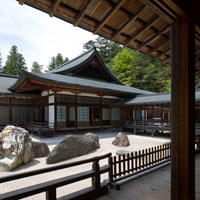 With an economy worth $4.4trn, Japan is the third richest nation in the world. Filled with high-tech bullet trains, peaceful rock gardens, dazzling neon signs and ancient pagodas, it is a colourful clash of old and new, west and east, which can seem daunting at first to the uninitiated. The Japanese, however, are a remarkably hospitable people and the country is a delight through which to travel.

The contradictions of modern Japan are most visible in Tokyo. With towering skyscrapers and quirky pop culture, the Japanese capital is also possesses some priceless ancient architecture and countless Shint? shrines. To the west, Kyoto is home to over 1600 Buddhist temples and remains one of the most unique and delightful cities in the world, while Nara hogs eight world heritage sites on its own.

Out of the major urban centres, the samurai village of Usuki plays host to the annual fire festival while the Pilgrimage of the 88 temples is well worth the walk. Everywhere you go you’ll find fine food, whether succulent oysters, fresh spring rolls or spicy noodle soups.

Don’t worry about making mistakes during your business affairs – the Japanese are very forgiving of foreigners. If you’re lucky, you’ll be invited to one of the highly sought-after geisha bars; if not, there are plenty of other delights to keep you entertained. Music, dance, theatre or other, any diversion you can imagine can be pursued somewhere in these incredible cities – as well as many that you can’t.

Getting there
The majority of international flights go direct to Tokyo but a good percentage serve other cities, including Osaka. Ferry links take around 36 hours from Russia or 48 hours from China.

Getting around
Japanese public transport is famous both for its expensiveness and efficiency. Air, bus and rail services are all fast, frequent and comfortable, while there is also an extensive ferry network. Driving is feasible and there are many signposts in English.

Local information
Language: Japanese
Time: UTC+9
Climate: Warm oceanic. Hot summers, cool winters, plenty of rainfall. Temperature: Max 30°C (August), Min 4°C (January). Rainfall: Max 220mm (October), Min 50mm (January).
Currency: Yen (JPY)
Business etiquette: Greetings are formal and ritualised. It is important to show the correct amount of deference; mistakes are forgiven as long as genuine respect is shown. Negotiations are non-confrontational; facial expressions often say more than words.
Tipping: No tips required. If you feel compelled to tip, place the money in an envelope first and hand it directly to the intended recipient.
Duty free: 400 cigarettes or 100 cigars or 500g of tobacco; three bottles (0.76l each) of spirits; 56ml of perfume.
Safety: Japan has a very low crime rate. However, drink spiking incidents involving tourists, followed by robbery or assault, have been reported.
Laws: Minimum age for alcohol is 20. Criminal suspects can be held for 23 days without formal charge. It is an offence to knowingly allow a companion to drink-drive. Serious crimes incur the death penalty.
Healthcare: Vaccination required for tetanus. Medical facilities are excellent but costs are high; medical insurance is essential.
Socket type: Type A, Type B