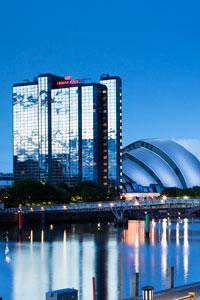 The story of Glasgow is familiar, at least; an industrial-era metropolis that fell upon hard times after the war and has reinvented itself during the later twentieth century with a series of urban regeneration projects.

But that would do the city an injustice; Glasgow’s soul has always run much deeper than its dockyards. Adam Smith considered the university superior to Oxford and the accumulated wealth of ‘The Second City of the British Empire’ is a testament to it’s forward-thinking nature.

The people have lost none of their sharp wit and sense of style, even while pursuing such diverse interests as curling, football, ballet and opera, and today it is bursting with edgy sophistication as it vies with Edinburgh for the title of Scottish capital of culture. The black humour that inspired the likes of Billy Connelly is evident everywhere, from the blunt exhibitions in galleries and museums to the surreal comments of the barman as he serves your drinks in one of the city’s funky, retro bars.

Where to stay
One Devonshire Gardens is housed in a beautiful preserved merchant palace built at the height of the city’s golden age and is worth a trip to Glasgow in itself. The Brunswick Hotel is clean, quiet and friendly and provides everything you need for a business visit.

Where to eat
Sister’s Restaurant on Kelvingrove Street serves a superb Scottish seafood menu that his the spot both at lunch and dinner. Guy’s Restaurant and Bar has something for everybody and chef that takes a personal interest in his customers.

What to see
The City Chambers and Glasgow Cathedral are both fine examples of Glasgow’s heritage. The Glasgow School of Art not only houses a world class collection but boasts some of the most influential Art Nouveau architecture of the early twentieth century.