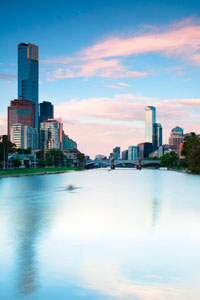 Regardless of its far-flung location down under, Australia remains a popular destination for business travellers; and its convenient proximity to the booming Asian economies only makes it more attractive to business folks in the UK and the rest Europe. Major cities such as Sydney and Melbourne are particularly worthy, since they are cosmopolitan in feel and display a multiculturalism that is integral to the Australian identity.

No longer known exclusively for their sports focus and “outdoorsy” identity, the two cities are upping their game in the cultural stakes. Another attraction to the business community is the culinary prowess evident both in Sydney and Melbourne, marked by creative cuisine drawing on the many exotic cultures associated with the country. A trip to Oz may be time consuming and involve a lot of logistic planning, but rewards aplenty await on arrival.

Sydney is more multifaceted than might first meet the eye. The city is divided into a range of different inner city areas and suburbs, each with its own distinctive character. Some notable inner-city locales include upmarket Paddington and the hip and trendy Surry Hills. The verdant oasis that is Centennial Park is another spot unique to Sydney, serving as habitat to a catalogue of different exotic bird species including Cockatoos, Black Swans and Rainbow Lorikeets. Another slice of natural wonder, the world-famous Bondi Beach is situated in close proximity to the city centre.
Sydney’s buzzing city nucleus and its surrounding beaches and green spaces are certainly worth exploring extensively, but the locale’s many suburbs should present the business traveller with a yet more eventful schedule. The word-famous Sydney Harbour serves as the springboard to a plethora of foreshores and harbour islands, while the Blue Mountains will prove a suitable destination for a daybreak as the World Heritage Area offers treks that could last for anything from half an hour to days on end.

Getting there
A number of airlines operate flights to Sydney including Quantas, British airways and Virgin Atlantic. Domestic carriers include Qantas, JetStar, Virgin Blue, Tiger Airways, SkyWest and Rex Airlines. Average price for a business class return flight is £2,800.

Getting around
Sydney Airport (also known as Kingsford Smith Airport) is located in Mascot, 10km south of Sydney Central Business District. There are several alternative means to travel into the city, the easiest being the Airport Link train service that runs from 5am to midnight, departing every ten minutes and taking around 13 minutes. Cost: (AUD 15 adults). Alternatively, Sydney Buses has a timetabled service between Bondi Junction and Burwood with stops at T1 International and T3 Domestic terminals. Taxi ranks are stationed at the front of all three terminals. A taxi ride to Sydney City costs approximately AUD 50, plus any bridge and road tolls and the AUD3 airport toll.

Getting around Sydney and its suburbs is easy and most public transport types operate efficient services. CityRail run services across the city and its suburbs as well as to the Central Coast, Blue Mountains, Southern Highlands and South Coast. Buses cover the metro area but also extend further afield. Metro Light rail is Sydney’s latest public transport system that runs from Central Station to Chinatown, Darling Harbour, Star City Casino, the Sydney Fish Markets and Wentworth Park. The Monorail operates frequently, serving eight stops that cover Sydney’s best attractions in the centre – it takes about 15 minutes to do the circuit and tickets costs AUD4.90.

Eating out
Sydney is celebrated for its good spread of edgy restaurants headed by internationally revered top chefs specialising in daring recipes and dishes with a forward-thinking edge. Eating out in Sydney is worthwhile but not cheap – prices are similar to London, if not a tad higher.

Restaurants
Marque, 4/5 355
Crown Street
Surry Hills NSW 2010, Australia
This multi-award winning restaurant is a hot ticket, and the establishment has reached international stardom. Headed by Mark Best, the master of New Australian Cuisine, the menu is largely French in style.

Gastro Park
5-9 ROSLYN STREET, POTTS POINT, KINGS CROSS, SYDNEY 2011
Gastro Park, “the playground of food”, is one of Sydney’s most buzzed about restaurants at the moment. It serves a menu that draws on “old and new”influences, with new dished created daily.

Where to stay
Most international hotel chains are present in Sydney, as well as design-led boutique hotels. Rates vary greatly, but as a rule of thumb a room in a 5-Star hotel is about 300AUD per night.

Melbourne exudes a European air and has plenty of culture to offer, while it’s equally awash with noteworthy restaurants, shops and nightlife spots. Green spaces are very much present too, and Melbourne is home to Australia’s biggest Botanic Garden, which encompasses 12,000 different types of plants. The skyline is varied and features modern architecture as well as a string of heritage buildings, some of which date back to the days when the city was formed by European settlers. To get the most out of the city, make sure to explore its diverse set of inner city pockets and surrounding suburbs.
It’s difficult to mention Australia without mentioning its sports heritage, and Melbourne is particularly sports-prone, so much so that it’s commonly referred to as the sporting capital of Australia. To prove it, the city plays host to a rich variety of sporting events, including the Australian Open tennis championship, Melbourne Cup horse race and a Formula One Grand Prix to name just a few.

The average price travelling for in business class is £2,900. The most affordable time to travel is during the off-peak, winter months from June-August. The flight takes 22-24 hours if travelling from London.

Getting around
Flights to Melbourne arrive at Tullamarine Airport, which is served by taxi and bus services for your onward journey. Having reached your destination, the best and most authentic way of getting around Melbourne is to travel by tram. The colourful trams stop at numbered tram-stop signs throughout the city. Metlink is Melbourne’s general public transport system, and its services span trams, trains and buses. A MetCard or the so called myki pass (myki.com.au) can be used for travel on any Metlink operated tram, train and bus. Melbourne’s public transport system generally ceases operation between midnight and 5am (weekdays) or 7am (weekends) but operates a limited night bus service on weekends.

The yellow taxis that serve the city indicate availability if the rooftop light is illuminated. Taxis can be hailed on the street or booked over the telephone. Some trusted taxi firms include Silver Top, Embassy and Black Cabs.
Major car hire companies present in Melbourne include Avis, Budget and Hertz. Driving in Melbourne is fairly straightforward and roads are usually wide with two or three lanes. Bear in mind that that trams will often share the road and special road rules exist to accommodate them.

Eating out
As is the case with Sydney, eating out in Melbourne requires a budget not far from what would be expected when hitting the best restaurants in London.

Where to stay
Melboune is awash with high end hotels, and the range span international heavyweights and smaller but equally notable players.

General notes on Australia
Money: Australian Dollar (AUD)
Australian banks include NAB, ANZ, Commonwealth, Westpac, and St. George. ATMs accept most foreign bank cards but charge a fee for withdrawals. Citibank, HSBC, Bank of China and other international bank ATMs can be found throughout the city. Australian bank branches are open 9.30am-4pm Monday-Thursday and 9.30am-5pm Friday. Tipping for services in hotels and restaurants is discretionary but, if paid, is up to 10 percent of the bill.

Business etiquette
Australians are known worldwide to be friendly and rather informal, privately and professionally, but its worth bearing in mind that they are usually punctual and very courteous.

In terms of dress code, smart always wins over casual, regardless of whether the meeting is held in the boardroom or in a restaurant over breakfast coffee – which is a popular meeting form in the country. The exchange of business cards often occurs at the initial stage of the meeting.