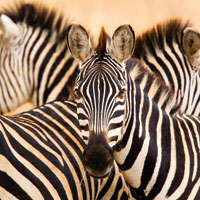 The Madikwe Game Reserve is a conservation reserve situated in the North West Province of South Africa. Covering 75,000 hectare, it’s a significant player in the sphere of wildlife preservation. In 1997, the reserve undertook the largest ever game translocation in the world, and the so called Operation Phoenix saw 8,000 animals of 28 species move to the reserve, including the Big-five and other endangered species.

Nestling within the reserve, one of the area’s most highly regarded safari resorts is the Tuningi Safari Lodge. Holding a Fair Trade mark, the property can accommodate 16 people at one time, and the lodges are conceived to preserve the inherent space of the property. Virtually blending the interior aspect with the wilderness outside, retractable doors and windows have been fitted wherever possible. The theme of the actual décor takes its cue from ‘Colonial African chic’ and the aesthetic runs through the entire property that comprises lounge, dining room and a bar area. The whole affair is interlinked by a sweeping wooden deck that leads to the Boma section and the bar area features a rim flow pool that overlooks a natural watering hole.

Pleasant surroundings aside, the pivotal part of any trip to the Madikwe Game Reserve would naturally be to experience its wildlife. Two game drives are scheduled by the Tuning Safari Lodge daily, and to maximise the chances of sightings of animals including lion, elephant, buffalo, white and black rhino, leopard, as well as the rare and endangered wild dog, most expeditions start at dawn and continue until dusk. In addition to traditional game drives, bush walks hosted by the resort’s skilled game rangers are also on the agenda and should appeal to folks seeking more of a thrill. These adventures are specifically designed to cover bush etiquette, and to teach aspiring bushmen about the local flora and fauna in more precise detail.

As it happens, you don’t have to go far to witness animal life- every morning, a family of elephants leisurely ambles past the lodge on their designated path, and are also known to regularly help themselves to a sundowner (a cooling drink enjoyed at sunset) by the swimming pool.

Lewa Concervancy, Kenya
East Africa is almost synonymous with the word safari. With its consistently temperate climate and varied cross-section of different eco-systems – that encompasses savannahs, semi-deserts, white coral beaches and mountainous forests – it’s easy to see why the region is placed so firmly on the world map of top safaris. Kenya is perhaps the country > with the strongest safari association, and one of the most established and high-end tour operators in the country is Cheli & Peacock.

The Royal wedding being well and truly over, it may seem a bit passé to highlight the destination where Prince William and Kate Middleton stayed before securing their engagement, but it would be a shame to overlook the Cheli & Peacock Lewa Conservancy Safari Camp on any grounds. The resort is based within the private 65,000 acre wildlife conservancy of the Lewa Wilderness Trust, which is considered the country’s most significant and successful wildlife conservancy. Hence, guests can expect diverse wildlife experiences of quite some calibre with animals such as cheetah, giraffe, elephant and lion forming part of the rich spectrum of beasts. Notably, the conservancy is home to ten percent of the world’s black rhinos, and it also hosts the largest number of the acutely endangered Grevy’s Zebra – a breed that has suffered one of the most devastating reductions of any African Mammal. Capitalising on safari tourism for a good cause, Lewa re-invests all the profits generated from tourism, including profits from Lewa Safari Camp, into its core programmes to continue its quest to preserve African wildlife. To boost the public’s awareness of the reserve, educational talks on the history and the day to day operation of the conservancy are arranged regularly.

Serving as the perfect safari backdrop, another significant characteristic of the resort is its distinctive view that stretches across Mount Kenya and the wild Northern Frontier District (making it obvious why Prince William ushered Kate to this particular spot to propose). Also of significant interest, the Lewa reserve is home to an archaeological site that is a fertile hunting ground for tools used by the prehistoric humans of the area. The number of items in circulation is so vast that it’s believed that an artisan tool workshop was located at the site, as the volume of items found is far too ample to have belonged to any domestic home, however tool-happy its residents.

Guests staying at Cheli&Peacock Lodge can choose between a wide range of options: the most common and convenient form of safari transportation is 4×4 land cruisers, but guests can also opt to experience the local wildlife at closer range yet, by embarking on expeditions on foot or even on horseback. One of Cheli&Peacock’s specialities, however, is airborne safari adventures. Guests can either take to the skies by hot air balloon or helicopter. The obvious benefits with airborne safari outings is that large areas can be covered over a shorter period of time, reaching the remote moorlands of Mt. Kenya, or the extraordinary landscapes south of Lake Turkana. The organisers at Cheli & Peacock are fairly flexible, and can arrange helicopter and hot air balloon excursions of almost any type and duration. The helicopters usually carry four passengers, but additional helicopters can be brought in to accommodate larger groups.

Displaying classic safari style at its best: the accommodation of Cheli & Peacock’s Lewa Conservancy Safari Camp comes in the shape of a camp consisting of 12 tents featuring thatched roofs, verandas and full en suite bathrooms for each tent. A central dining and lounge area form the camp’s natural centre point, and the swimming pool is positioned to overlook the rolling plains of the terrain.

The birds and gorillas of Rwanda
Popularly called “the land of a thousand hills”, the beautiful Republic of Rwanda known for its rich variety of exotic birds. A birdwatcher’s dream destination, the region boasts a recorded number of about 650 species of birds, 44 of which can only be found in Rwanda. Some of the birds worth looking out for in the national parks of Akagera, Volcanoes and Nyungwe are Shoe Bill, Purple-breasted Sunbird, Rwenzori Turaco, Red-faced Barbet, Little Bee Eater,  Rockefeller’s Sunbird, Collared Apalis, and Fraser’s Eagle Owl.
In addition to its respectable bird population, Rwanda is also famous for its carefully cultivated gorilla habitats, and approximately half of the world’s wild population of Mountain Gorillas are resident on the Rwandan slopes of the Virungas.

The prime gorilla spot within the area is Le Parc National des Volcans – a region marked by an extraordinary terrain of towering volcanoes, lush forest, rivers and lakes.

Strategically curated, the procedure of gorilla tracking excursions follows a specific format. The norm is that groups of maximum six people track a handful of different gorilla families, while some gorilla groups don’t come into contacts with tourist at all. When embarking on a gorilla expedition, trackers are almost guaranteed to come into contact with a gorilla family. And once the targeted group of animals is located, trackers get to spend an hour in the presence of the family that typically encompasses a silverback, a few females and a slew of baby gorillas. ‘Tracking for gorillas in the national park of Virunga was an extraordinary experience. Before setting off, our guides briefed us on the gorilla family we set out to track, and even told us details about each individual animal, including its name. Once tracked down, you come quite close to the animals. On my visit, one baby gorilla was particularly entertaining and showed off by doing cartwheels and other tricks in front of the group of trackers,’ reminisces Matt Darwin, who visited Virunga reserve recently.

The gorillas may be the main attraction, but other creatures sharing the same terrain are the Golden Monkeys. Providing almost as high a level of entertainment as cart wheeling baby gorillas, the Golden Monkeys flit about in the bamboo forest with remarkable zest. Notably, these are the world’s only colony of golden monkeys.

When setting out to visit the Virungas, a worthy accommodation option is the Virunga Lodge that is located on a mountainside, overlooking the towering Virunga volcanoes and the lakes of Ruhondo and Bulera. The lodge comprises of a central building with reception, bar and dining room, and each individual banda features a bedroom with double or twin beds and an en-suite bathroom. Another alternative is to check in to Lake Kivu Serena hotel, which overlooks the beautiful Lake Kivu, and is located in relatively close proxymity to the gorilla reserve.