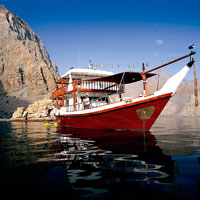 Oman is a country blessed with a fantastic wealth of natural beauty, a fascinating and vibrant culture, magnificent landscapes and warm hospitality. However these are just a few of the reasons why the country is emerging as an increasingly popular destination for UK tourists, who, arriving in their droves are relishing Oman’s pristine waters, epic mountain ranges, sweeping deserts and spell-binding souks. Indeed, it could be said that Oman’s largest attraction is its contrasting and diverse landscapes; from the south to the north, travellers can expect one of the most varied and pristine landscapes on earth.
All of this provides the perfect backdrop on which to mix business, conference and incentive travel and tourism; but what can visitors expect from a visit to Oman? In order to service its fantastic wealth of natural beauty, the country has established state-of-the-art conference facilities soon to be joined by an ultra-modern convention complex along with the first-class air, road and telecommunications networks to ensure that any business trip is carried out with seamless professionalism.

With sustainable development at the heart of these facilities, Oman has managed to maintain its firm roots in tradition, affording visitors the true Arabian way of life, while looking steadfastly to the future to provide visitors with a truly 21st-century and beyond experience.

Visiting Oman
Known formally as the Sultanate of Oman and ruled by HM Sultan Qaboos bin Said, Oman is divided into nine main regions – Muscat, the administrative and commercial capital, Al Batinah, Al Dhahirah, Al Dakhiliyah, Al Sharqiyah, Al Buraymi, Al Wusta, Dhofar and Musandam. Each of the regions is then divided into smaller wilayats to help in the administration process.

Its rich cultural and archaeological heritage reflects thousands of years of international trade and foreign influences, evidence of which is spread all over the country, home to more than 500 forts, castles, watchtowers, four UNESCO heritage sights and rock paintings.

It has never been easier for tourists from all over the world to enjoy Oman’s heritage and natural beauty as visa-on-arrival services are available to citizens from more than 50 countries, including the UK. As a result of the country’s drive to become a non-oil based economy to one based on manufacturing and trading, Oman now welcomes 2.5 million visitors per year, with an average of 100,000 of these coming from Britain.

Investing in tourism
So successful has the tourism industry been that the Ministry of Oman has identified it as a critical growth sector and as having a direct impact on the country’s economy. Tourism already accounts for 2.9 percent of the country’s GDP and the ministry aims to increase this figure to five percent by 2050.

The opening of a record number of attractions, leisure properties and services during 2011 has allowed Oman to build significant momentum for its tourism and hospitality sectors. Last month alone has witnessed the opening of 1,400 new hotel rooms, the completion of the Royal Opera House Muscat and extended Muscat-Khasab routes from the National Ferry Company – all of which will prove pivotal in putting Oman on the map as a business and tourist destination.

Building for the future
Having world-class venues from which to conduct business and leisure has been key to Oman’s emergence as a major player in the business and tourism industries according to Salem Al Mamari, Director General of Tourism Promotions, Sultanate of Oman’s Ministry of Tourism, who also identified the need for Oman to continue with its development: “The launch of new resorts and hotels will be welcome developments as demand can be very overwhelming during peak seasons. We also need to broaden the base of mid-range and budget hotels as this segment is attracting more patrons. There are beautiful niche properties such as the Sahab Hotel in Jebel Akhdar and the Sifawy Boutique Hotel at Jebel Sifah which opened in June 2011 which have high-quality four-star appeal. Regional projects such as these and the Millennium Hotel at Mussanah are at the heart of our tourism strategy to spread the benefits of tourism to all of Oman.”

Evidence of this wave of new development can be seen throughout Oman, and there are certainly some striking examples to be seen. The first of the five hotels planned for the resort of Muriya Jebel Sifah, close to Muscat, is the Sifaway Hotel. This superb venue for business and pleasure offers a water link directly from the front door using an Ocean Blue International’s 75’ catamaran Azzura for the ultimate experience in making an entrance. Also on Oman’s business radar the Sahab Hotel and The View eco retreat is located in the breathtaking surroundings of the Hajar Mountains and just two hour’s drive from Muscat.

Oman’s capital, Muscat has seen the most accommodation growth in recent times and is fast becoming a most venerable place to do business. Notable openings for 2011 include the unveiling of the City Seasons Muscat, which features 268 four-star rooms, three restaurants and three conference rooms, and the Park Inn in Al Khuwair, conveniently located near many ministry buildings. The city will also welcome several mid-range and budget hotels throughout the year to make the city perfectly suited for a whole range of business activities from the modest to the grandiose.

Cultural connoisseurs will be pleased to note the opening of the Royal Opera House in October 2011; a stunning marble structure that is set to become an iconic building in Oman and world-class venue for performing arts.

Ferry services between the city and Khasab also became fully operational in April of this year to provide the city with a fast, clean and efficient transport service capable of carrying up to 200 passenger and 56 cars at speeds of up to 80km per hour.

Doing business in Oman
On track for its scheduled opening in late 2015 is Oman’s Convention and Exhibition Centre. This project is being facilitated under the supervision of leading firm OMRAN and includes a 3,000 seat plenary, 25,000sq m of exhibition space and a total of 1,000 rooms over four hotels.

Located just four kilometers from Muscat airport, the development will be the jewel in the crown of Oman’s business meeting infrastructure as well as complimenting the country’s already impressive facilities. Its landmark design will be sympathetic to Oman’s cultural heritage whilst incorporating state-of-the-art facilities and utilising the natural beauty of its surroundings.

State-of-the-art conference and exhibition facilities will be complemented by four hotels, including a five-star flagship property, two four-star hotels and a boutique three-star accommodation.

When asked about the significance of this new development, Al Mamari concluded: “The centre will give Oman the clout to bid for regional and international events as never before, and lure more tourists to Oman through pre- and post-event tours. The project is a good example of a coordinated strategy of providing infrastructure that takes advantage of Oman Air’s growing network of non-stop services to the western and eastern hemispheres.”