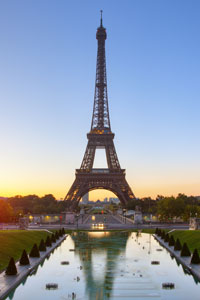 Saturday
9am It will be a long day, but as one of the most influential cities in the world, Paris deserves it. Getting up early also means getting the Eiffel Tower out of the way quickly – book a ticket online to avoid the hordes, take the metro to Bir-Hakeim, head up the 324m structure and try to resist the temptation to take the same photo that is taken by thousands of other visitors every single day.

11am Time for a cruise along the River Seine. Head along the river’s edge by the Quai Branly, and then wander about 10 minutes further down on the right to Les Invalides. The building complex houses museums and monuments relating to France’s military past, including the tomb of Corsica’s most famous son Napoleon Bonaparte.

1pm Continue along the Quai d’Orsay before turning left and crossing over the Pont de la Concorde on the Right Bank. From here enter the Jardin des Tuileries and amble through the gardens leading up to the Louvre. Remember queues are often long and it’s best to pick one or two exhibitions of the time or select a specific collection such as the jaw-dropping ancient civilisations of the Near East.

3pm Time for a late lunch: cross the Pont des Arts at the end of the Louvre, into the St Germain des Pres area. On rue Saint Andre des Arts is the Creperie Saint-German – a world of sweet and savoury pancakes, cool goblets of cider, and a cosy atmosphere with an eclectic selection of music.

4pm Just ahead on the left is Sainte Chapelle, famous for its unforgettable stained glass windows, while on the right is the renowned Cathedral of Notre Dame, which traces its history back to the 12th century. From here head north into the Marais district: the heart of ParisÕ Jewish community, it includes the Picasso museum and plenty of trendy craft and fashion boutiques. Once at the rue des Francs-Bourgeois, turn left towards rue Rambuteau. The vibrant Beaubourg area is a den of restaurants, cafes and bars so the choice is perfect for an evening out.

Sunday
9am A trip to France wouldn’t be complete without seeing the finest food on display. Take the metro to Denfert Rochereau in the 14th and amble through rue Daguerre. From oysters to horsemeat and the fruits of the season, some of the freshest foods in Paris are available to be sampled.

11am A stone’s throw away from rue Daguerre is the entrance to the underground Catacombes, an ossuary that fills a section of caverns and tunnels that once were Paris’ mines. Skulls, bones and tombstones adorn kilometres of passages.

1pm Keeping to the same theme, once out of the Catacombes take the metro northeast to Pere Lachaise, Paris’ biggest cemetery. It is home to the likes of Oscar Wilde and Doors lead singer Jim Morrison.

4pm One last port of call: the world’s most famous avenue the Champs Elysees. Finally, fight the hordes to get into Laduree to taste the creative pastries of some 40 chefs and where most walk away with at least a box of macaroons.