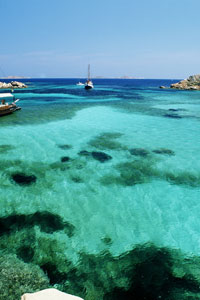 Just two kilometres away from Eccelsa’s new terminal is the brand new Marina di Olbia, which accommodates yachts of all sizes and provides superbly discreet transfers to and from the airport. This is a unique advantage, offering the only capability in the Mediterranean Area to begin one’s holiday on Costa Smeralda within a few minutes of touching down, with no long drives in cars or helicopter hops.

Officially opened just last year, the terminal is an architectural masterpiece in its own right. Seen from on high it looks like a massive aircraft door, while seen from ground level its clean, sleek lines seem to swoop skyward like giant wings. The elegant lines and beautifully designed natural and artificial lighting create a sense of profound intimacy and relaxation in the cocoon-like comfort of the terminal; a strange sensation indeed for an airport that caters to over 40,000 passengers.

Eccelsa Aviation has embraced its role as gatekeeper to what is often called the world’s most beautiful sea, combining utter professionalism with a touch of special charm that comes from confident care for discerning, often celebrity clients. “Any chance you could find us containers for 300 kilos of fabulous Italian ice-cream before it melts, please?” – that doesn’t even come close to the oddest request the highly efficient team headed by general manager Francesco Cossu has had to deal with.

“In the last seven years our passenger numbers and plane movements have doubled, and with that the sheer variety of requests we find ourselves having to satisfy,” he explains with a smile. Numbers of a highly select kind of visitor to the Costa Smeralda are booming. These are people that visit the region to chill out on super yachts or in the dreamily exclusive villas along the shore. The result of this discreet influx has been the building of the new terminal which now includes no less than 4,000sq m of retail heaven offering the best selection of typical Sardinian products and a plethora of luxury boutiques including Loro Piana, De Grisogono and Zegna. A quality restaurant and a conference hall are now in operation, with a new spa and sauna scheduled to open in the next year.

Undisputed efficiency
All glass and glittering design, the air terminal has one feature that makes it absolutely unique in Europe: a formidable outer wing that allows guests to enter and exit the terminal directly from their aircraft. This giant wing will provide shelter even to the big executive B737s and A319 and A320s: the nearest thing there is to an airborne villa with hundreds of square metres of cabin space that can include three bedrooms, four or five bathrooms, a lounge, office and enough aircraft fuel to fly across the Atlantic. Intriguingly these giant executive jets now make up around four percent of aircraft movements at the terminal.

Eccelsa was founded in 1989 by the Olbia Airport Management Company, Geasar, and became an autonomous entity in 2003. Over the last eight years it has doubled movements from about 7,000 to over 14,000 aircraft per year.

Naturally enough, July and August are the busiest months in the skies over Costa Smeralda with 3,000-4,000 arrivals and departures clocked up monthly. Privacy and security are two of the qualities private aircraft passengers most appreciate about Eccelsa Aviation; it’s just a very quick hop by helicopter to any super-yacht with a helipad from the Olbia terminal and many other passengers will also choose this way to travel to their villas or hotels.

The whole process works like very smooth clockwork thanks to the undisputed skills and efficiency of Eccelsa’s highly motivated 40-strong team. The terminal’s own concierge services organise everything needed to make a stay perfect: horse trekking, aircraft or helicopters, Ferrari or Aston Martin rentals, and yacht charters, both crewed and bare-boat.

Eccelsa also provides in-flight catering, offering a menu of 100 dishes ranging from simple sandwiches to mouth-watering lobster, alongside a careful selection of local Sardinian and Italian foods and wines. The Meridiana Maintenance team also offers first class technical assistance on the ground and there are integrated services for flight crews. Air taxi companies and their crews are also well catered for – these now make up quite a considerable proportion of the traffic coming into Olbia Costa Smeralda. Eccelsa Aviation is one of the reasons why people that want to holiday in a genuinely special place come back to Sardinia again and again. A place where friendliness, quality and a first class service are all part of the attraction.