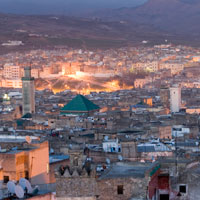 This is the oldest of the imperial cities in Morocco and was at the centre of Arab influence during the Renaissance era, while many Moroccans still see it as the true cultural heart of their country. It doesn’t bare its soul as easily as the more extrovert Marrakesh, yet the veil of Arab mystic that cloaks much of the city – not to mention the sometimes overwhelming activity – makes the moments of clarity and discovery all the more wondrous.

You can’t come to Fez without being impressed by its history. Medieval Medina has been continuously inhabited since the 10th century AD and dazzles with towering spires that look particularly impressive under the soft light of the early evening, while the ancient Qarawiyyin Mosque is the main challenger to Cairo’s Al-Azhar for the title of oldest university in the world. Don’t worry too much about trying to find anything though; just lose yourself amid labyrinthine old streets that offer up a never-ending reel of unique sights and sounds.

Where to stay
The superb roof terrace of the Riad Le Calife caps an all round excellent hotel, with levels of service that go the extra mile. The Palais Amani is an authentic Moroccan paradise where everything down to the scent of the flowers is attended to in style.

Where to eat
Maison Blanche serves a fine Moroccan menu in a fashionable modern setting. Family-run Dar Hatim, buried deep in Medina, serves some of the best local cuisine in town; they’ll even send somebody to your hotel to help you find it.

What to see
World Heritage Site Medina is the prime attraction; just outside, the Borj Nord and Dar Batha museums showcase weapons and Moroccan arts respectively. Historic Mellah is another beautiful old neighbourhood and is much more peaceful than Medina.