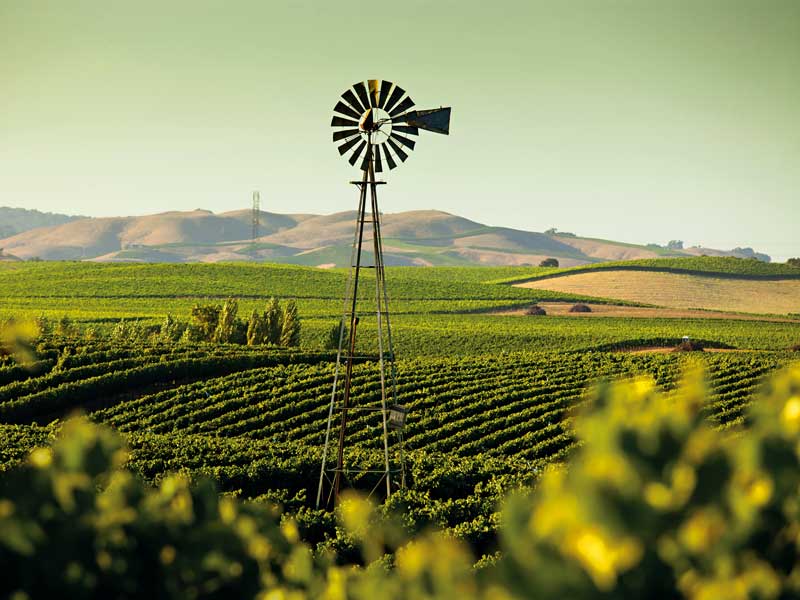 It’s official – the ‘locavore’ trend is having a moment, and nowhere is that more true than in the US. According to a survey by Local Food Marketing Practices, more than 167,000 US farms sold locally produced food in 2015, bringing in $8.7bn in revenue. Eco-conscious consumption is growing as a whole, with 100 percent of Millennials asked in a 2016 survey by Watershed Communications saying they frequently chose food brands based on their reputation for authenticity.

“US organic food sales have consistently increased each year,” James Davis, agriculture economist at UC Berkeley, told Business Destinations. “This suggests that a significant subsection of consumers value the attributes that are associated with organic agriculture, such as labelling, locally sourced production and minimal environmental impact.”

California’s blossoming food scene is putting lesser-known destinations on the map, moving the onus away from ever-pricier spots like San Francisco and LA

Laying claim to more than 77,000 farms (95 percent of which are family-owned) and 800 certified farmers’ markets, the Golden State is the US’ leader in agriculture, producing 90 percent of the country’s wine and, in 2017, 57.3 percent of its vegetable harvest.

According to Visit California, agriculture in the state contributes more than $20bn per year to the economy in exports, putting it up there with the state’s two other biggest industries – technology and tourism. California is also a key innovator in the field, setting the trend for other states to follow.

According to Davis: “It has the agricultural resources and infrastructure, access to capital and leading research institutions necessary to make it the nexus of agricultural innovations and the leader [among] all states.”

Farm-to-fork eating in California is nothing new, however. The Slow Food movement, which has always aimed to make food “good, clean and fair for all”, dates back to the 1970s and 1980s, when eco-awareness was on the rise and green-flag-waving hippies were dominating the news.

But it’s evolved dramatically since then, with demand for pesticide-free produce and other environmentally friendly practices rising by the year. Today, restaurateurs are also getting in on the action.

That growth seems to go hand in hand with the rising demand for authentic, immersive travel that’s been sweeping the planet in recent years. According to Visit California, gastronomy-related activities ranked among the top 10 motivators for travel to California in 2017, as visitors sought genuine, local experiences.

At the time, 11 percent of all travellers from California’s top global markets said it was their primary reason for visiting, while around 20 percent (or 54 million travellers) took part in some sort of food experience while in the state.

The region is certainly prepared to offer these experiences. Restaurants and hotels that grow their own produce are popping up left, right and centre, with key examples including the Michelin-starred French Laundry in Napa Valley, which has a three-acre garden in which several of its ingredients are grown, and the Philo Apple Farm in Mendocino, where guests can stay at the farm and cook their own food using produce harvested on site.

There’s also the likes of Outstanding in the Field, an events company that hosts dinners on various farms throughout the year – you can’t get much closer to the source than that.

Rising star
As well as giving a significant boost to the economy (visitors to California spent $32.3bn on food and drink in 2015), California’s blossoming food scene is putting lesser-known destinations on the map, moving the onus away from ever-pricier spots like San Francisco and LA.

Rent per square foot in Sacramento

Revenue made by US farms selling local produce in 2015

of California’s farms are family-owned

Caroline Beteta, Visit California President and CEO, explained: “Many new restaurant openings are outside the state’s gateway cities, in places such as Sonoma County, Morro Bay and Pismo Beach on the Central Coast, and even near Yosemite National Park.”

It is Sacramento, though, that’s really coming into its own as a result of the farm-to-fork trend. Despite being the capital of California, it has always been the lesser-known, quieter sibling, overshadowed by bigger names such as Los Angeles and San Francisco.

The Farm-to-Fork programme, established in 2012, has started to change that. Designed to show off the farms, wineries, restaurants and breweries that make up the region, it has been attracting more attention each year. Its annual festival, held every September, sees live bands join farm-fresh food trucks to celebrate the flavours of California. It proved so popular in 2015 that attendance quintupled from the first event in 2013.

The state has also seen a string of new restaurant openings, kicked off by the Golden 1 Centre in 2016 – a $558m indoor arena, next to which nearly 40 restaurant and cafes have since opened. Other developments include a new 46,000sq ft food hub, the Milagro Centre, and a slew of other new eateries in East Sacramento and beyond.

Celebrating farmers
Sacramento’s local food scene is not just catered towards consumers; it also has deep respect for its agriculture industry. According to Mike Testa, Chief Operating Officer of Visit Sacramento: “Farm-to-fork is everywhere, but when we talk about what Sacramento has that other cities don’t, it’s the production side, the farmers,” he told California Meetings and Events magazine. “So we celebrate not just food, but farming.”

Sacramento’s local food scene is not just catered towards consumers; it also has deep respect for its agriculture industry

Chefs get their ingredients from farmers’ markets, and those ingredients are cultivated just outside the city. The region accounts for almost all of the processed tomatoes consumed in the entire country – and a third of the world’s supply – plus the majority of the grapes used to make Napa Valley wines.

“That means the city has access to the freshest produce, locally raised meats and an ever-increasing array of artisanal, farm-based products. Chefs and locals have known this for quite some time, but recently more foodie, experience-seeking travellers have taken notice.”

It’s not just the rural areas providing these fresh ingredients either. Urban farms are starting to proliferate, pioneered by the likes of Soil Born Farms, a non-profit organisation that was launched when the sustainable food movement was just beginning in 2000. Soil Born Farms’ aim is to educate people about all things agriculture.

Spotlight on Sacramento
It is comparatively easy to produce such items in Sacramento, making ingredients cheaper. Additionally, a recent article by Thrillist found that Sacramento rents average $21 to $30 per square foot per year, while the figure hits $85 in certain parts of San Francisco and $80 in LA’s Santa Monica.

This is leading some chefs to up sticks from other parts of the state and set up shop in Sacramento instead. Renowned chef Brad Cecchi, who earned his Michelin star at farm-fresh restaurant Solbar in Napa Valley, moved to Sacramento last year to launch Canon – an unpretentious, casual eatery that holds fresh, seasonal produce at its core.

Chef Sam Marvin, meanwhile, chose Sacramento for the second branch of his famous Vegas steakhouse Echo & Rig, which he opened in April. He told Thrillist in January: “I’m going into [Sacramento] for the same reasons I went into downtown LA [in 2009]… It’s ready for take-off. It feels like Portland or Seattle did 10 years ago.”

Marvin highlighted where the real excitement of the farm-to-fork trend in Sacramento lies: as big-name cities get increasingly expensive, pricing out inhabitants, entrepreneurs and chefs alike, cities like Sacramento are stepping into the spotlight.

At the same time, the trend for eco-conscious eating is spreading out beyond California and into the wider country, offering new opportunities for farmers, restaurateurs and consumers, and providing competition for the mass-produced, sugar-laden foods that have for so long filled America’s shelves.

That could have far-reaching benefits for the health of the nation as well as the health of its economy – and if it continues to hold sway, we could all be thanking cities like Sacramento in years to come.