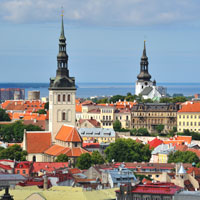 Estonia is a small, sparsely populated country of wild forests and teeming wetlands. The convenient national parks are perfect for wild exploration during the summer months, while cross-country skiing is a popular sport during the winter. The capital Tallinn captivates with its blend of medieval and modern; cobbled back-streets and dizzy spires besides trendy bars, modern art galleries and some of the finest restaurants in the Baltic region.

An independent nation since 1991, it became one of the world’s fastest growing economies in it’s post-Soviet years, until the financial collapse in 2008 saw GDP shrink 17 percent in 18 months. Like neighbouring Latvia, the government has maintained its currency peg against the euro with the express intention of deepening the recession, forcing down wages and prices and thereby restoring the economy’s competitiveness.

Such policies have kept the country on track to join the euro as early as 2011, but has pushed unemployment to 19.8 percent in the first quarter of 2010. Droves of Estonians have left to seek work elsewhere and because of the migration many companies have had problems finding skilled employees despite the relatively large pool of workers without jobs.

Estonians themselves are uncomplicated people; they mean what they say, keep promises they make and expect their business partners to do likewise. They are reserved to the point of coldness during initial contact but will become more friendly as a business relationship progresses. Despite economic problems, Estonia retains a good business infrastructure and deals can often progress relatively quickly.

There is a limited train service linking urban centres. Buses are a better option, as they are faster and more frequent. An international driving license and compulsory accident insurance are necessary to drive.

Safety: General crime level is low. Petty crime is common during the summer months and after dark, particularly in Tallinn Old Town. Theft on and from vehicles is on the rise.

Healthcare: Vaccination for tetanus, diphtheria and hepatitis A required. Excellent medical facilities available, European citizens get free healthcare with an EHIC card. Non-EU may be charged and should have health insurance.