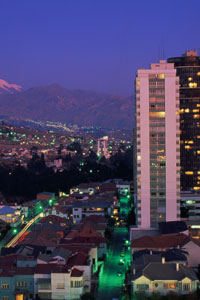 Draped partially over a high Andean plateau and partially over the southern Amazonian rainforests, Bolivia is a bustling country full of contrast and energy. Travelling there is not easy – the elevated terrain and the poor quality roads make driving a nightmare, while public transport is extensive but unreliable due to regular strikes and the forces of nature.

Somehow, though, this hardly matters, because there’s so much to take in while you wait. La Paz, clinging to its dusty valley beneath distant, snow-capped peaks, seems at once oasis and anthill, drawing the eye in a hundred conflicting directions. Nearby, the sprawling markets of El Alto seem to dwindle into infinity and it’s easy to lose yourself amidst the myriad back alleys and side streets.

Just a few miles away, The North Yungas Road winds 80km to Coroico from the high glacial valley to subtropical paradise, dropping nearly 4000m in the process. Dubbed ‘the most dangerous world in the road’, it’s a mountain-bikers dream; four hours of downhill bliss winding down the side of an epic ravine, under a series of waterfalls, as eagles glide over the valley just a few feet from your shoulder.

At its base is another world entirely; a languid rainforest paradise. Yet you’ve only just begun to explore. What of the eerie Salar de Uyuni salt plains, the dinosaur tracks at Torotoro, or the enchanting beauty of Lake Titicaca? This is Bolivia; diverse, beautiful and superlative in every way.

Airports at Santa Cruz and La Paz serve most South American cities; other routes are limited. Flights to La Paz are expensive due to altitude. Buses operate to all neighbouring countries; the roads to Argentina and Peru are best, others can cause problems.

Buses are the backbone of an extensive public transport system. Trains, taxis, trucks and boats are also in use. Delays due to protests, floods or damaged roads are common. Driving is not recommended due to poor quality, dangerous roads.

Safety: Petty theft is common in tourist areas. Assault and robbery in unmarked taxis or when hiking without a guide is common. Thieves often work in teams for distraction.

Laws: Penalties for drug offences are severe. Excavation, collection of fossils and export of archaeological goods or national treasures are all illegal.