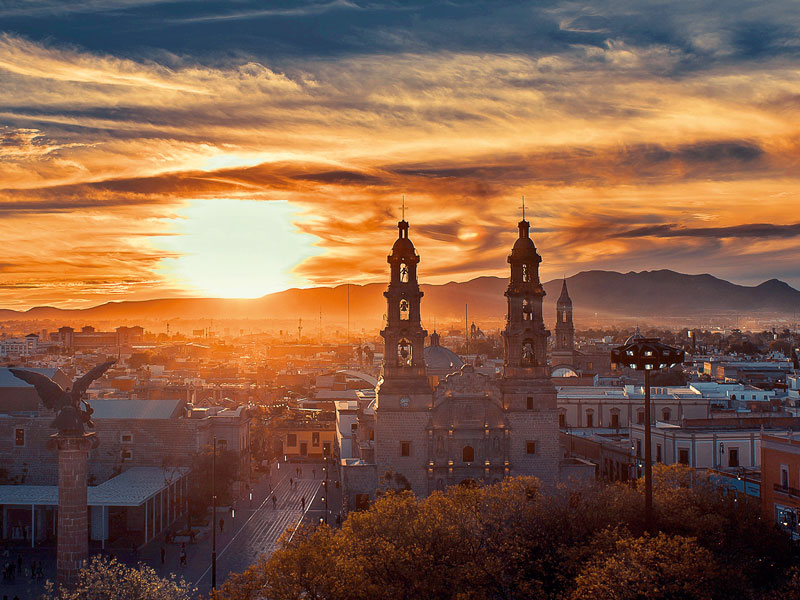 Aguascalientes boasts a pleasant climate for the majority of the year, alongside a strategic location in the centre of the country

With a wide range of cultural, gastronomic and viticultural traditions, Aguascalientes is one of the most prosperous, safe and welcoming states to visit in Mexico. It boasts a pleasant climate for the majority of the year, alongside a strategic location in the centre of the country and high-quality road infrastructure that allows for easy communication with the rest of the country.

The state hosts events and festivals throughout the year, including the San Marcos Fair, the Wine Festival and the Cultural Festival of Calaveras. This keeps it full of activity and ensures there is always something for locals and visitors to do.

Although Mexico has a number of world-famous destinations, including the likes of Mexico City, Cancún and Tijuana, it also has lesser-known delights that are equally, if not more, rewarding for the intrepid traveller. Placing a spotlight on these unsung treasures is the Mexican Pueblos Mágicos, or Magical Towns, programme.

This title is awarded to areas that have preserved a unique historical, cultural and aesthetic quality. There are currently 111 Magical Towns in Mexico and the state of Aguascalientes is home to three of them.

Aguascalientes is rich in natural resources. It’s fortunate to have many of its most popular tourist destinations in relative proximity to each other. From the capital, you can reach any point of interest in the state in no more than an hour, so exploring all the natural riches, customs, crafts and cuisine of the area is a joy for visitors.

With treasures such as Malpaso Dam, the cave paintings of the Tepozán and El Garruño waterfall, this territory of tradition and warmth always receives visitors with open arms.

Talk of the town
Amid the countless attractions that tourists can visit while in Aguascalientes, the Pueblos Mágicos of San José de Gracia, Real de Asientos and Calvillo are the true jewels in the state’s crown. San José de Gracia, less than an hour’s drive from the state’s capital, has long captivated with its exquisite cuisine and breathtaking landscapes.

Adventure tourism is also alive and well in this part of the world, with the Boca de Túnel Adventure Park proving popular, along with the camps and hunting ranches at Sierra Fría. Visitors should also be sure to see Cristo Roto, a stunning 28-metre-high statue of Jesus Christ that is one of the five largest sculptures in Mexico.

Real de Asientos, located in the north-east of the state, is the oldest municipality in Aguascalientes. Father and son Francisco and Diego de Ibarra founded the town in 1548 and, with its pink quarry houses and detailed ironwork adorning doors and windows, the area can sometimes feel as though it has been frozen in time.

As a former mining town, one of Real de Asientos’ biggest draws is its network of underground tunnels, which date back to the 19th century. Other attractions include the Parish Church of Our Lady of Bethlehem, which houses a figure of Christ composed of human remains, and to which miraculous powers have been ascribed.

Calvillo is the largest guava producer in Mexico and the fruit plays a major role in the town’s identity. Guavas are used to make traditional marmalades, jams, jellies and sweets, and are used in bread and fruit punch. Guava products can be purchased in many stores in the town and provide a great deal of direct and indirect employment for the local population.

The Yolihuani Temazcal and Spa provides visitors with a chance to relax and unwind, offering a number of safe, efficient, alternative therapies that promote physical and emotional health. Of course, the town welcomes visitors all year round, but if you are in the area around December, be sure to attend the Guava Festival, which has been held in Calvillo for more than 50 years.

A privileged location
As a result of Aguascalientes’ fantastic location in the centre of Mexico, travelling between the state and some of the country’s other famous regions is straightforward. Its proximity to the states of Guanajuato, Zacatecas, Querétaro, Jalisco and San Luis Potosí gives visitors easy access to the country’s industry, trade and services epicentre.

In terms of its transport links, Aguascalientes is also difficult to beat. Aguascalientes International Airport facilitates six airlines and more than 109 flights a week to destinations including Mexico City, Tijuana, Dallas and Los Angeles.

If you’d prefer to travel by car, the city of Aguascalientes is just an hour away from León, Mexico’s seventh most populous metropolitan area, and just over two hours away from Guadalajara, which is considered by many to be the home of mariachi music.

Getting around Aguascalientes’ capital is also convenient and enjoyable. Taking the tram allows visitors to get between famous landmarks such as the Cathedral of Our Lady of the Assumption and the National Museum of Death at a faster pace.

For travellers preferring to take things a little slower, a walk through the historic centre is highly recommended. Local guides are also on hand to add to your experience of the city’s beautiful architecture and natural scenery.

Open for business
Aguascalientes may have enough cultural and historic delights to keep holidaymakers entertained, but it represents an ideal destination for corporate travellers too. The city boasts more than 69,000sq ft of floor space for conferences, conventions and exhibitions, which ensures that visitors never have to go far to find a suitable business venue.

The Plaza of the Three Centuries, named as such because different parts of the building were constructed across the 19th, 20th and 21st centuries, can accommodate more than 5,000 visitors across its exhibition area and two large meeting rooms.

The plaza is particularly noted for its impressive Californian architecture and beautiful dancing fountains, although the locomotive standing at the entrance is also difficult to miss. If visitors want to enjoy a little downtime, the complex also includes the MECA, an 86-hectare regeneration project that encompasses three new museums and a concert hall.

Across the city from the plaza is the Convention and Exhibition Centre of Aguascalientes, located on San Marcos Boulevard. Adaptable to almost any kind of event, the venue can accommodate 7,500 visitors in the auditorium and has more than 1,400 parking spaces. An administrative area and on-site health services ensure that event organisers and attendees have access to all the support they need.

Of course, an outstanding event venue relies on more than just the bricks and mortar that go into its construction. Aguascalientes’ conference destinations are enriched by visits to cultural sites, vineyard tours and journeys to the state’s three Magical Towns.

More than that, it’s the warmth of the local people and the welcoming atmosphere they create that makes Aguascalientes an attractive destination for holidays and business trips alike.