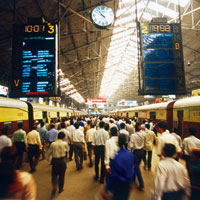 Continued allegations of bribery within companies are trouncing shares – In addition, growing concerns over continuing indications of a sluggish economic growth and rising interest rates are hitting the news daily. Yet, the US Assistant Secretary of State for South and Central Asia, Robert Blake, believes India is on its way to becoming the largest economy by 2050. He recently observed at the Centre for Strategic and International Studies: “India is a rising giant whose influence is felt not only in the Indian Ocean, but in the Americas, in Africa, the Middle East, and in Central Asia.” Blake added: “Its rise, fuelled by a dynamic, young, optimistic and educated population, will be one of the great stories of our time.”

A survey published by Ernst & Young at the beginning of June showed that in spite of regulatory obstacles, India remains one of the most favoured destinations for foreign direct investment thanks to its comparatively high economic growth. “India is undergoing a transition in terms of investor perception of its market potential, which is bolstered by economic growth projected to surpass eight percent annually,” according to the survey.

Due to India’s acknowledged forte as a centre for low cost outsourcing for business it will rank in fifth place among the most attractive business location for European companies within the next three years, the Ernst & Young survey showed. The report said: “Foreign investors are not deterred by current regulatory issues to invest in India and its perceived specialisation as a low cost business process outsourcing hub continues to appeal to investors across the globe.” The survey, to which around 800 executives from top level international companies contributed, stated also that Mumbai and New Delhi are likely to be amongst the cities most probable to create the next Microsoft or Google-sized innovation.

Although growth carries on, data published at the end of May showed India’s economy grew at its weakest pace in five quarters as it slowed to 7.8 percent in the three months to the end of March in comparison with 8.3 percent the previous three months. According to analysts an intense inflation, a gradual increase in borrowing costs and a lacklustre investment sentiment was responsible for dampening domestic demand. India’s growth for the full 2010-11 financial year was 8.5 percent, just 0.1 percent below its government’s prediction. It was however half a percent up from the eight percent annual growth it had recorded to March 2010. As demand climbed for electronic, gem, engineering and oil products, India’s exports grew a record 37.6 percent in fiscal year 2010-11, data released in June showed. Imports for May 2011 increased 54.2 percent to $40.9bn while exports rose 56.9 percent to $25.9bn year on year. The country intends to reach merchandise exports of $300bn for the fiscal year 2011-12 and according to data, shipments last year climbed to a record high of $245.9bn.

Meanwhile, German luxury car manufacturer Audi announced in June that as part of its long term commitment to India it will add its newest model, the A6, to its Indian production line in Aurangabad. Audi, which already produces the A4 and A5, said: “The production of the all new Audi A6 underlines our growing presence in the Indian market and reiterates our long term commitment to customers in India.”

Mumbai
Known as the financial and commercial capital of India, Mumbai is the home to numerous key financial institutions including the National Stock Exchange, the Reserve Bank of India, the Bombay Stock Exchange and the India Government Mint. Although Mumbai’s affluence originally began thanks to its seaport and textile mills it has nowadays developed into a hub for IT, engineering, diamond polishing, healthcare and other industries. As an increasing amount of companies employ more » skilled labour more and more industries have emerged as significant economic contributors in Mumbai. Among the most prevalent are the Bollywood film industry, clothing, pharmaceuticals, utensils and food industries.

Some of the nations’ most high earning companies are headquartered in Mumbai. One of the biggest players with revenues of $62.5bn at the last count was the Tata Group. The company, which acquired Jaguar Land Rover three years ago for $2.3bn from Detroit carmaker Ford, sold over 28,000 units in the financial year 2010-11. Jaguar Land Rover at the end of May set up its first assembly plant in India to assemble the Freelander 2 Sport model, which will use parts from Tata’s Land Rover facility in Liverpool. Reliance Industries, said in mid-June it is to acquire Bharti Enterprises’ majority stake in its general and life insurance ventures with Europe’s biggest insurer, AXA. Mumbai-based Reliance Industrial Infrastructure will hold 17 percent in the life and general insurance companies while Reliance will hold 57 percent. In the meantime, Axa will maintain its hold of 26 percent in the ventures, which is the maximum authorised by Indian law. Reliance’s billionaire owner Mukesh Ambani is hoping to expand in the financial services arena as demand increases, and is aiming to diversify the business as earnings growth from its core oil and gas business slows down.

New Delhi
The capital of India serves as the heart of the Government of India and is located within the city of Delhi. The service sector is ever expanding as an increasing number of multinational companies open up businesses in New Delhi. In addition to banking, media and tourism, IT and telecoms have flourished as key industries within New Delhi. Major IT companies have emerged and are now having a significant impact on the city’s reputation as a hub for cutting edge technology. Most recently, New Delhi-based IT product design and manufacturing company, MSI India, which has received market recognition for its production of notebooks, motherboards and networking and server products, announced in June that it is now all set to launch its own tablets in the Indian market by July this year. MSI, which announced it is to spend around $1m on marketing and advertising this year, hopes to double its head count and expects revenues of around $60m for the 2011-12 financial year, up from the $45m it recorded in 2010-11.

Another New Delhi-founded e-commerce company, BenefitsPLUS Media, continues its acquisition spree as it aims to gain a market share of between 10 and 15 percent of India’s e-commerce market. In June the company came closer to its target when it announced that its parent company DigiVive Services acquired one of India’s leading group buying websites, Koovs.com for $2m in May.

Meanwhile, according to an official with the New Delhi-based Ministry of Heavy Industries and Public Enterprises a governmental team will shortly review four sick public sector companies to fast track their disinvestment process. The companies, which are just four of 27 sick companies under the administrative control of the ministry, have been listed as Richardson & Cruddas, Hindustan Cable, Hindustan Machine Tools and Tungabhadra Steel. The government team will consider a range of options including an outright sale of the companies, with one senior official saying: “We are looking at all possibilities. In some cases it can be an outright sale, while the option of revival through a joint venture will also be explored.” The government originally considered disinvestments only through public offers. The ministry has been postponing the sale of shares in some profitable companies because of stock market unpredictability but aims to raise around Rs 40,000 crore through divestment in public-sector companies in the 2011-12 financial year to slash high fiscal deficit.

Bangalore
Bangalore is another city which has developed into a centre for heavy industries, Indian telephone industries, BPO and IT. Bangalore’s IT industry is divided into three main groups, the International Tech Park, the Software Technology Parks of India and Electronics City. Nicknamed as the Silicon Valley of India, it first emerged after the establishment of India’s biggest electronic industrial park, Electronics City. It now houses several global companies including Siemens Information Systems, 3M India, HP, General Electric, Bharat Heavy Electricals, CGI and Yokogawa. Infosys technologies and Wipro, India’s second and third largest IT services companies are also based at Electronics City in Bangalore.

Great news for Bangalore came when Infosys Technologies in mid June clinched an Rs 100 crore deal with India Post as it embarks on a huge IT modernisation programme named “India Post 2011”. Infosys beat its largest domestic rival, Tata Consultancy Services, to clinch India Post’s IT modernisation contract, referred to as the ‘rural information and communications technology system integrator contract’. India Post is alleged to have the widest postal network in the world, with around 155,670 post offices, of which nearly 90 percent are located in rural areas. Only 12,604 post offices have thus far been computerised, according to its website.

Although IT is a key facet in Bangalore, a survey published by Monster Employment Index in June showed a slow demand in the IT and ITES area has lowered the overall growth of Bangalore in May to four percent compared with other cities such as Coimbatore which grew by 31 percent.

In the meantime aircraft maker Airbus SAS, which has an engineering centre in Bangalore, announced in mid June that it has signed a strategic agreement with CADES Digitech and QuEST Global. The two Bangalore-based companies, which are already suppliers to the aircraft maker, are to establish centres which will solely focus on the design of aircraft components and other engineering services. The two companies will each concentrate on different aspects with QuEST focusing in wing and pylon engineering while CADES would focus on aircraft main body fuselages across various aircraft programmes. According to an Airbus statement, each company will have offices in Europe and dedicated centres in India. The new agreement with the two companies will try to consolidate engineering services already acquired from numerous suppliers and will “focus on the development with the two tier-one suppliers”.

SunTechnics Energy Systems, one of Bangalore’s largest companies dedicated to solar energy, said in June that it would change its focus and its name. It will now take on its parent company name Conergy to become Conergy Energy Systems and shall focus mainly on small and large scale solar photovoltaic projects. Conergy’s clients in India include key telecom, oil and gas companies as well as government agencies and manufacturing sector customers in addition to state and national government-owned units.

Kolkata
Kolkata, home to India’s largest bourse, the Calcutta Stock Exchange, is the key business, commercial and financial centre of East India and the north-eastern states of the country.

Just like with the other key Indian business cities IT has become a chief sector within Kolkata. In addition Kolkota has turned into an important centre for banking and finance, which is respected globally. Presently numerous large international banks like BoA, Standard Chartered Bank and HSBC Bank boast offices and branches in Kolkota. This is in addition to the country’s three large nationalised banks, Allahabad Bank, UCO Bank and United Bank of India, who have their headquarters in Kolkata. It is also home to several industrial units managed and operated by various large Indian companies. Some notable companies headquartered in Kolkata include ITC, Birla, Haldia Petrochemicals, Exide Industries, Britannia Industries, Bata India, CESC, RPG Group, Texmaco, Bengal Ambuja, Philips India, Coal India and Damodar Valley.

Silk Air, a regional wing of Singapore Airlines, commenced lower budget flights to Kolkota’s from the beginning of July. The thrice a week service between Singapore and Kolkota airport will be in addition to the flights already operated by its parent company Singapore Airlines and will cost around 15 percent to 20 percent less.

Meanwhile, the state-owned Allahabad Bank, which is planning to open more overseas branches in Singapore, Hong Kong and Schenzen in China, announced in June that it is aiming to achieve a business growth of 24 percent during the financial year 2011-12. The bank’s shareholders additionally approved a dividend of Rs6 per equity share of face value Rs10 for fiscal year 2010-11. At the bank’s annual meeting its managing director JP Dua said: “Targeting a 24 percent growth for this fiscal year will take the business level to Rs 280,000 crore.”