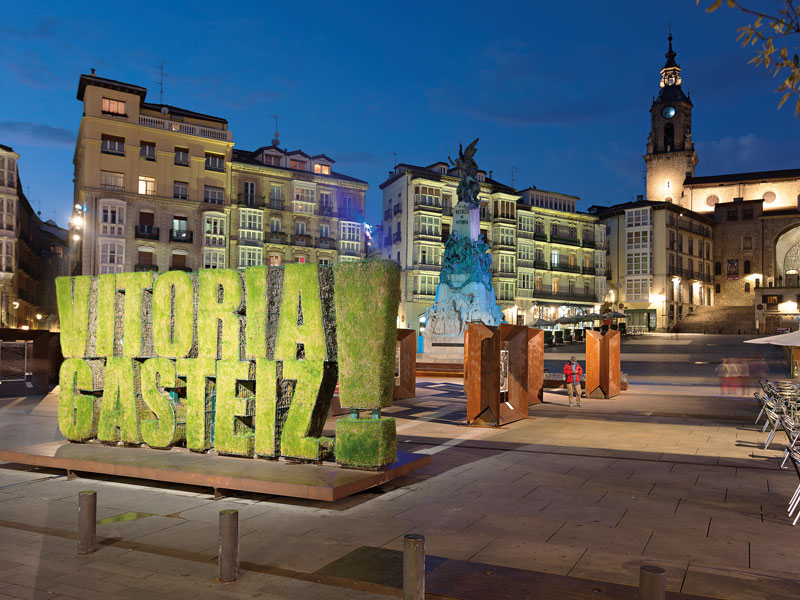 Vitoria-Gasteiz has a lot to offer the MICE industry, combining enchanting scenery with fine dining and eco-friendly design

Vitoria-Gasteiz, capital of the Basque Country and 2012 European Green Capital, features some of the most extensive green spaces on the continent. However, founded in 1181, it is home to many other treasures, including a unique conference centre.

More than 250,000 trees of various species were planted in the city’s green belt between 2012 and 2015, one for each resident, meaning the city now resembles a botanical garden. The green belt that surrounds Vitoria-Gasteiz includes an extensive network of pedestrian and cycling paths, and the wetlands of Salburua are home to birds, deer and the endangered European mink.

The façade of the Europa Congress Palace has been transformed into a hanging garden of more than 33,000 native plants

The city’s medieval past has been preserved in its historic quarter. Here, visitors will find the 13th-century Cathedral of Santa María, which inspired Ken Follett to write his bestselling novel World Without End.

The 11th-century medieval wall and 18th-century Los Arquillos demonstrate the cultural and architectural diversity of the city, which experienced a neoclassical expansion in the 1700s. The Plaza de la Virgen Blanca and Plaza de España offer pedestrianised streets with a great shopping atmosphere.

Eat, drink and be merry
Vitoria-Gasteiz boasts a programme of top-class events such as the Jazz Festival, the Azkena Rock Festival and the Vitoria-Gasteiz Triathlon. Visitors can also enjoy Basque culture through rural sports, folklore and traditional celebrations like the La Blanca Festivities, where you can experience one of the best festive atmospheres in Northern Spain.

Awarded the title of Spanish Capital of Gastronomy in 2014, Vitoria-Gasteiz offers traditional dishes and modernised versions of Basque cuisine in restaurants and tapas bars, with offerings to suit all budgets.

Just a few kilometres from Vitoria-Gasteiz sits a landscape rich in vineyards. Budding sommeliers can taste its internationally-acclaimed wines, including bold Riojas from Rioja Alavesa and dry, sparkling Txakolis from Alava.

The region is studded with wineries ranging from the traditional to the avant-garde, designed by renowned architects such as Frank Gehry and Santiago Calatrava. A few kilometres to the north, you can discover the beautiful landscape of the Ayala Valley.

The Salt Valley offers you the chance to visit the Añana Salt Flats, where salt has been harvested for more than 6,500 years, and is still used by the most prestigious chefs.

Conferences with a conscience
Vitoria-Gasteiz is the ideal venue for conferences concerning environmental issues. The façade of the Europa Congress Palace has been transformed into a hanging garden of more than 33,000 native plants, making it an icon of sustainable architecture.

The building has also won international awards, such as the LEED Gold certification by the US Green Building Council. Since its full renovation in 2015, it has hosted events for audiences of more than 1,000 people.

The Basque Country is a destination that anyone can enjoy. Visit the Guggenheim Museum in Bilbao, the Game of Thrones set on the Basque coast and enjoy the view at La Concha Bay in San Sebastián.