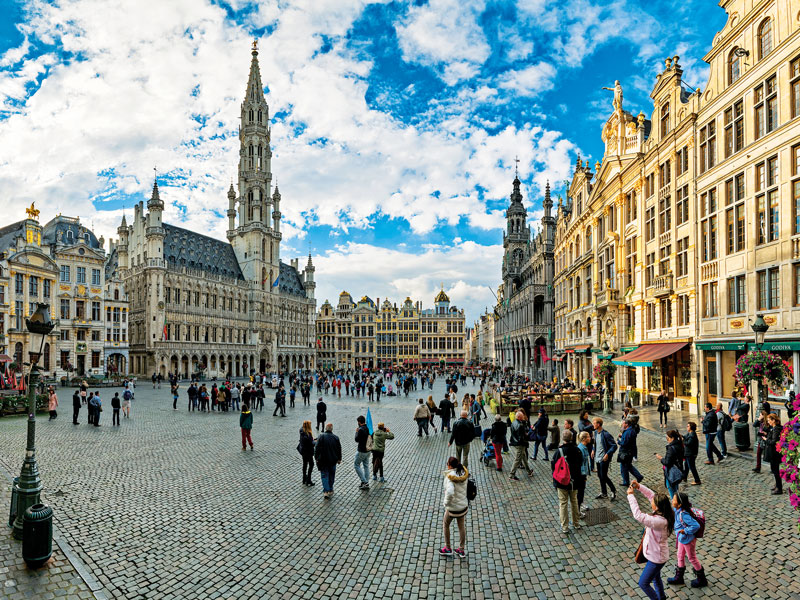 Walking through Brussels International Airport, one will notice the signs plastering the walls, communicating one insistent message: you are now in the beating heart of Europe. As a metonym for the European Union, mentions of Brussels are sometimes met with apprehension in these politically turbulent times, but the city itself remains a hub for culture, business and power.

When walking around the city, one may be confused to find that every street and landmark has two names – a reflection of the eternal tug of war between Belgium’s French and Flemish halves. Between the green spaces, Art Nouveau design and world-class gastronomy, Brussels has something for everyone to enjoy.

Outsized culture
Given its relatively small size, it is certainly impressive that Brussels represents the zenith of a number of globally loved foods. Never preach to a Bruxellois about the taste of German beer or Swiss chocolate, and woe betide anyone who refers to frites as ‘French fries’ or suggests the Belgian waffle is rivalled anywhere else in the world.

In 2016, Belgium’s world-renowned beer culture was added to UNESCO’s Intangible Cultural Heritage of Humanity list. The wide range of brewing styles, fermentation methods and unorthodox ingredients has created an immense variety of colours, textures and flavours, making Belgium the most diverse beer-producing region in the world.

Delíríum Café, perhaps the city’s most famous bar, holds the Guinness World Record for the most beers offered. When it received the award it offered 2,004 types of beer, but today that number stands at 3,162.

The city’s nightlife rivals most in Europe. Nightclubs don’t get going until around midnight, before which one can enjoy a drink on the floor of the Grand Place central square, or indeed at any of the thousands of bars around the city. There is always a sense of adventure in navigating the narrow cobblestoned streets and the minefield of gregarious restaurateurs trying to draw you in with moules frites at a discount.

Corridors of power
Brussels is a city where, like Washington DC, proximity to power is palpable. A stroll through certain districts leaves one with the unshakeable sensation that the decisions being made within walking distance will have global reverberations. Home to the European Parliament, the European Council (not to be confused with the Council of Europe), and one of the seats of the European Parliament, there is no important EU-wide decision made that is not shaped in some way by Brussels. The world’s premiere military alliance, NATO, is also headquartered in the centre of the city.

For enterprises that have business with the EU, a presence in Brussels is essential. Walking down the streets, one can only guess as to whether passersby are executives, lobbyists, diplomats or politicians. Brussels houses the headquarters of more international institutions than Washington DC, and is second only to New York in terms of diplomatic presence. Brussels is also the world’s second-largest hub for hosting international business meetings and conferences.

Its strong links to the European market, proximity to international institutions and multilingual workforce make Belgium – and Brussels in particular – an attractive destination to set up regional HQs. Sitting at the intersection of European cultures, Brussels, with its highly diverse population, is a microcosm of Europe, making it an ideal test market for products being introduced to the continent.

Both calm and bustling, sleepy and lively, the Belgian capital strikes a balance that lets visitors and residents enjoy the best the city has to offer. Whether for the food, architecture, a business meeting or to visit a global political centre of power, Brussels does not disappoint.