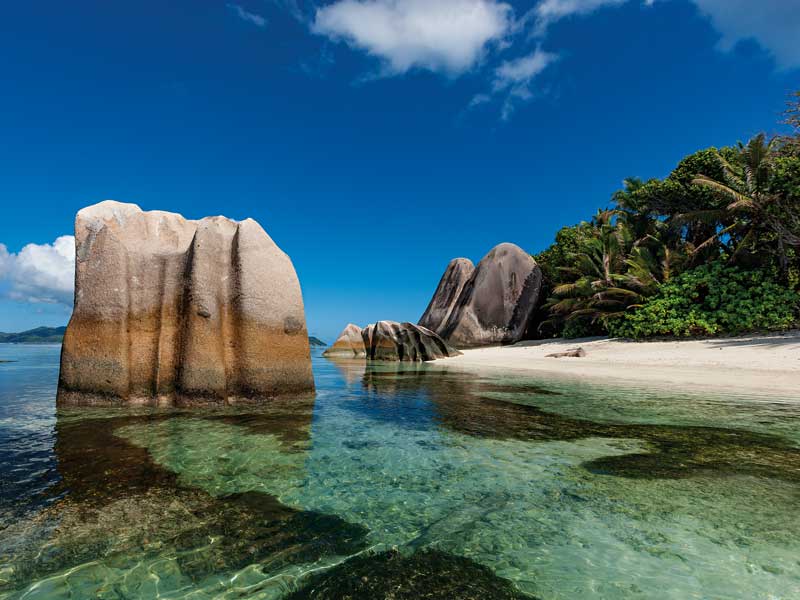 Now served by a multitude of major airlines, more people than ever are able to explore the natural wonders that the Seychelles has to offer

The 115 islands of the Seychelles archipelago lie scattered across their corner of the Indian Ocean like precious gemstones set in a universe of azure water – stepping stones to the east coast of Africa and a natural gateway to the continent’s many treasures.

With few historical records to fall back on, there remains little more than conjecture to piece together the early history of these spectacularly beautiful islands. We do know that after serving as a hideout for pirates during the 17th and 18th centuries, the French settled on the islands in 1756. They remained a French colony until 1814, when the defeat of Napoleon saw them pass into English hands. They would remain so until they gained independence in 1976 as a sovereign republic within the Commonwealth.

The Seychelles is divided into six island groups, with the Inner Islands of Mahé, Praslin and La Digue, together with their neighbouring isles, forming the hub of the country’s tourism industry, the economic life of the nation and its political and social infrastructure. Although the islands’ charms have long attracted travellers in search of pristine tropical beauty, it wasn’t until the construction of an international airport in 1972 that the country became the tourism hotspot that we know today.

Exploring island life
Measuring 27km long and 8km wide, the Seychelles’ main island of Mahé is a mountainous, granitic landmass that boasts 65 beaches. It is home to the capital, Victoria, the country’s international airport and the vast majority of its 90,000 mainly Roman Catholic residents. Commanding spectacular views of the surrounding ocean, Mahé contains the lion’s share of the archipelago’s hotels, tourism amenities and retail outlets.

Mahé also showcases a surprising variety of flora and fauna, including many indigenous species, discoverable at the National Botanical Gardens or via organised wildlife tours. The fascinating underwater treasure houses of the Sainte Anne and Baie Ternay Marine National Parks, meanwhile, can be visited on snorkelling expeditions and a variety of other excursions.

The Seychelles’ second-largest island, Praslin, lies 45km north-east of Mahé and is accessible by Air Seychelles domestic flights in 15 minutes or by catamaran ferry in 45 minutes. Praslin stands just behind Mahé at the forefront of the country’s tourism industry, boasting a rich assortment of hotels and guesthouses. It is ideally situated for holidaymakers wishing to island hop to a handful of nearby exotic destinations such as Chauve Souris, Cousin, Curieuse, St Pierre, La Digue and the Aride bird reserve.

La Digue is situated 40km from Mahé and is the fourth-largest island in the Seychelles after Silhouette. This granitic island, with its uniquely languid pace of life, is a popular destination for holidaymakers wishing for a taste of the traditional. This is a place where the bicycle and ox cart still hold sway on shady island pathways, and where a distinct sense of antiquity pervades the island’s customs, architecture and general way of life.

The remaining five groups of Outer Islands represent the far frontier of the Seychelles holiday experience. Shimmering atolls and reef islands, unaltered since the days of their formation, offer the pinnacle of island-style living. Currently, only three such islands offer accommodation: the islands of Denis and Bird, located 160km to the north of Mahé, and Desroches in the Amirante island group, 225km to the south-west. Here, the only sail on the ocean and the only footprints on the beach will be your own.

Something for everyone
All the islands have been blessed with a wealth of natural assets including a near-perfect and disease-free climate, an extensive list of pristine beaches, a sanctuary for some of the world’s rarest species and an enviable conservation record, with almost half of the 455sq km landmass having been set aside for natural parks and reserves. There are also two UNESCO World Heritage Sites: the extraordinary Vallée de Mai, where the legendary, double-lobed coconut, the coco de mer, grows high on ancient palms in a setting once thought to be the original site of the Garden of Eden; and the Aldabra atoll, the planet’s largest raised coral atoll.

The surrounding waters are a natural aquarium, boasting a dizzying array of coral-reef fish, turtles, rays, sharks, dolphins and marlins, as well as colourful coral growth and a host of other marine organisms. The world’s largest fish migrates to these waters: the 40ft whale shark, one of the Seychelles’ many protected species.

Also on offer is an amazing degree of diversity, representative of the islands’ 41 towering granite isles, 74 shimmering sand cays and the many reefs and atolls of the Outer Islands. Meanwhile, the multi-ethnic roots of the Seychelles’ relatively young society lend themselves to a varied and vibrant culture, with all its people and major religions living in harmony. The diversity also extends to the delicious Seychellois Creole cuisine, with its blend of European, Indian and Chinese culinary influences.

When it comes to things to do, there are fishing, sailing, wellness retreats, world-class golf courses, trekking, island hopping and much more. All of these activities can be enjoyed from an equally diverse array of accommodation choices, including the ultimate indulgence of exclusive five-star resorts, the intimacy of the smaller hotel and guesthouse, and the flexibility of any number of self-catering options. These are the foundations of a unique experience of paradise, where the innate tranquillity of the islands forms the ideal backdrop against which to recalibrate mind, body and soul.

Close to the heart
No account of the Seychelles’ riches can be considered complete without mention of its reputation as the ‘Islands of Love’. It is little wonder that lovers are inspired to take their vows and wed in this gentle and romantic atmosphere: the islands create the idyllic ambience of an unforgettable wedding day, honeymoon or anniversary on the silk-soft sands and beneath the swaying palms.

Transportation, both in between and around the islands, makes visitors’ dreams of island hopping a reality. Besides Air Seychelles domestic flights, fast ferry transfers and passages on traditional, sail-assisted schooners all bring the principal islands and their satellites within easy reach.

A varied choice of excursions – both land and marine-based – is available through local ground handlers, who will introduce visitors to the very best that the Seychelles has to offer, while hire and chauffeur-driven cars and taxis are on hand to take travellers on a personal voyage of discovery around Mahé and Praslin. A wide network of bus routes across these two islands is also able to cater for most itineraries.

The islands have been made more accessible than ever thanks to the arrival of major airlines such as Emirates, Kenya Airways, SriLankan Airlines, Etihad, British Airways and Air France, in addition to the national carrier, Air Seychelles, offering daily and double-daily flights. Today, the Seychelles is virtually one stop away from anywhere on the planet, with the added advantage of zero visa requirements for any nationality.

Nature has endowed the Seychelles with a breathtaking collection of delights. Against the backdrop of its unique island beauty is a place where harmony, tranquillity and nature conspire to leave visitors with memories that will truly last a lifetime.