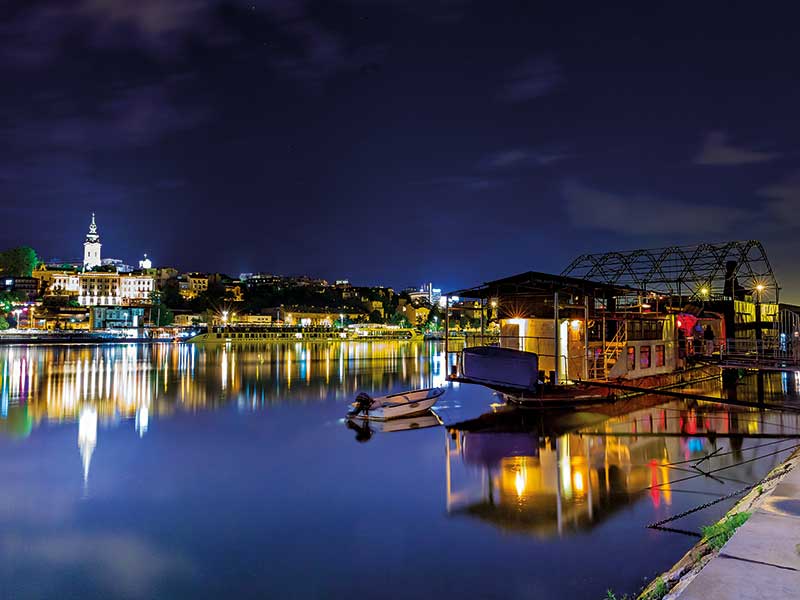 A hotbed of culture and history, Belgrade’s past may be painful, but today the city is vibrant, offering some of the best nightlife in Europe

Not often considered among Europe’s most popular destinations, Belgrade has been underrated for far too long. Although shell-shocked buildings act as a reminder of the NATO bombings of 1999, this city is filled with a complexity and character that is often missing from Europe’s more traditional tourist destinations.

As one of Europe’s oldest states, the Serbian capital provides a unique amalgamation of cultures, combining wonderfully to create an experience like no other. Never is this more evident than in Serbia’s hearty and robust cuisine, which draws on a curious mix of Italian, Greek, Eastern European and Turkish recipes to create familiar, but pleasantly novel dishes. Further, the locals are incredibly welcoming, with hospitality forming an integral part of the Serbian philosophy.

White City
One of the many pleasant surprises offered by Belgrade – also named the White City, a reflection of its snowy days gone by – is just how green it is, even in spite of the scorching heat. The city’s abundance of trees and parks offer a real sense of serenity rarely found in cities. Meanwhile, at the city’s centre, the great River Sava meets the Danube, providing idyllic riverside views for the countless restaurants, cafés and upmarket bars on offer. Among the best places to go are those dotted around the city’s highest point, which provides breathtaking views of the cityscape, day or night.

The city’s architecture is even more intriguing, with a combination of Byzantine, Ottoman, neoclassical and romantic buildings populating many of the city’s older avenues, while neighbourhoods in New Belgrade offer buildings of the Art Nouveau, neo-Byzantine and brutalist persuasion. Indeed, Belgrade’s architecture is a brilliant illustration of the city’s intermingling culture and influence.

Cultural enlightenment
Branded as ‘the city that never sleeps’, it’s no wonder Belgrade’s nightlife is like no other. With no high or low season as such, the city’s array of popular clubs fit around the seasons; in summer, clubs migrate to the river barges that float gracefully along the River Sava, while autumn and winter see punters flood to the bustling warmth of the inner city.

In spring, the squares are abuzz with those seeking cultural enlightenment; the biggest event of the year, the Night of the Museums, brings more than 450 museums, galleries and exhibition spaces together, welcoming visitors throughout Serbia to join the festivities late into the night.

In the summer months, Belgrade is overtaken by a series of festivals, from the beer and music themed to those centred on film, theatre and even books. There are festivals in the winter too, and Belgrade’s many restaurants, theatres and opera houses ensure there is always something to do.

The Ada Ciganlija Lake offers the perfect escape for those wanting to engage in water sports or simply soak up the sun. Meanwhile,
no visit would be complete without a trip to the city’s nucleus, the Belgrade Fortress, which provides a fascinating insight into the city’s remarkable but troubled past.

With so much on offer, it is no wonder the Serbian capital is quickly becoming a popular destination for business. Belgrade’s geographical position and incredibly reasonable prices make it an ideal location for any business trip and, with Serbia’s economy on the rise, Belgrade’s MICE scene is set to continue growing at an exponential rate, especially as more and more people discover the delights of the White City.