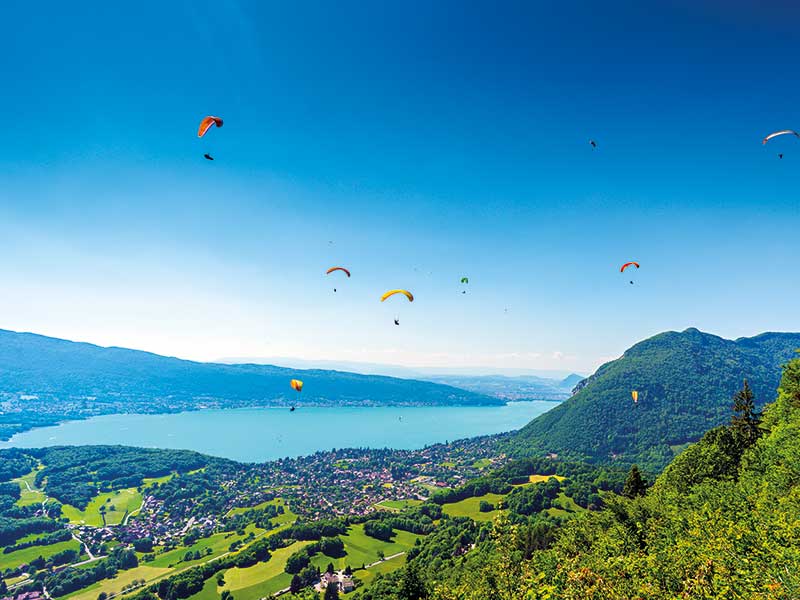 Brimming with natural beauty and regional charm, the Alpine city of Annecy is fast becoming one of Europe’s hottest destinations

Nestled on the northernmost tip of a mountain-fringed lake is the beautiful French city of Annecy. With winding canals and cobbled streets, the Alpine city is sometimes called the ‘Venice of the Alps’, and it certainly lives up to this romantic reputation. Home to its own turreted castle and a 12th-century lordly manor, the city has managed to keep much of its old-town charm, despite its growing status as an essential European destination.

Conveniently located in the southeast of France, Annecy is just hours from neighbouring Switzerland and Italy, and is served by two major international airports: Lyon-Saint-Exupéry and Geneva. With Lake Annecy’s crystal clear waters easily accessible from several European urban centres, the fairy tale city is becoming an instant hit with tourists and business travellers alike.

A hidden gem
While most trips to France see visitors flood to the bustling capital of Paris or the dazzling shores of the Côte d’Azur, the charming city of Annecy is something of a national treasure. Still relatively unknown to foreign tourists, the crystal waters of Lake Annecy attract thousands of French nationals to the city every summer.

As well as acting as the focal point of the city, the Lake Annecy is also something of a Mecca for outdoor sports enthusiasts

Formed more than 18,000 years ago – in the latter half of the last ice age – Lake Annecy is known as Europe’s purest lake, boasting pristine turquoise waters that stretch as far as the eye can see. As well as acting as the focal point of the city, the lake is also something of a Mecca for outdoor sports enthusiasts.

Fringed by breathtaking Alpine mountains, the diversity of the lakeside landscapes gives rise to a number of sports. On the waters of Lake Annecy, intrepid travellers can indulge in a spot of wild swimming, as well as water skiing, kite surfing, sailing and canoeing. In the surrounding mountains there are countless hiking routes to choose from, with every trail promising impressive views of the stunning Alpine lake. Lake Annecy is also known as the birthplace of paragliding, and is one of the world’s premier destinations for the adventure sport. With its wide, green valleys and gentle winds, Annecy’s pristine lake is the ideal location for all paragliding fanatics.

Meanwhile, back in the heart of the city, it is the local food scene that really puts Annecy on the map. The Rhône-Alpes region is often called ‘France’s pantry’, thanks to its diverse range of local products and specialities. From freshly caught fish to traditional cheeses, Annecy’s world-renowned restaurants serve up only the very best local ingredients. And, of course, no dish could be complete without a glass of one of the region’s famous wines.

Indeed, given how the French tourism market has suffered over the past 12 months, this influx of business travellers is becoming increasingly crucial to the French economy. As the fear of terrorism keeps travellers away from France’s famous tourist hotspots, hoteliers across the nation are attributing some 40 to 50 percent of their revenues to business travel.

The Rhône-Alpes region boasts the sixth-largest economy of any European province, and is France’s second-biggest region in terms of area, economy and population – coming just behind Île-de-France.

The Rhône-Alpes region is also the third-largest French destination for business tourism, and this industry is now booming.
With more than 30 exhibition centres and 40 luxury event locations, the region can cater to conferences and meetings of any size, combining state-of-the-art facilities with an exceptional setting. Located just 30 minutes from Geneva, the Annecy Congress Centre is due to open in 2018, providing a tranquil alternative to the nation’s hectic financial hubs. Here on the shores of Lake Annecy, mixing business and pleasure has never been easier.