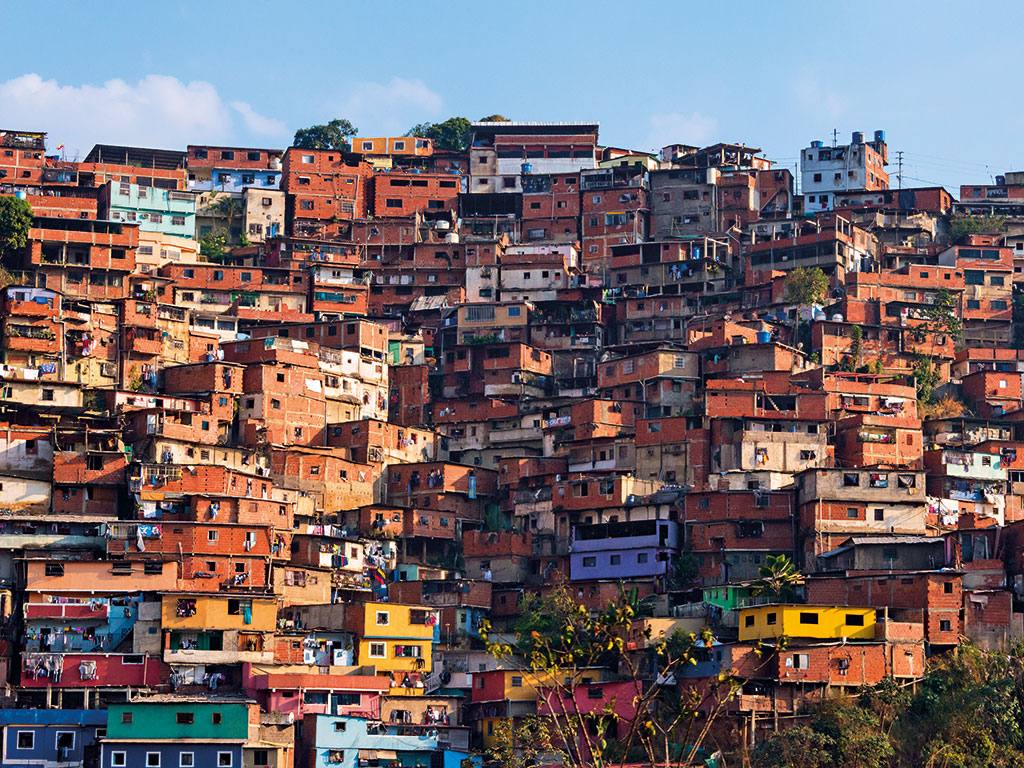 Slums on the hillside in Caracas, Venezuela. The country is currently suffering from severe financial mismanagement

Ever since the 2008 financial crisis, it has been common to chastise economists for not having predicted the disaster, for having offered the wrong prescriptions to prevent it, or for having failed to fix it after it happened. The call for new economic thinking has been persistent – and justified. But all that is new may not be good, and that all that is good may not be new.

The 50th anniversary of China’s Cultural Revolution is a reminder of what can happen when all orthodoxy is tossed out the window. Venezuela’s current catastrophe is another: a country that should be rich is suffering the world’s deepest recession, highest inflation and worst deterioration of social indicators. Its citizens, who live on top of the world’s largest oil reserves, are literally starving and dying for lack of food and medicine. While this disaster was brewing, Venezuela won accolades from the United Nations Food and Agricultural Organisation, the Economic Commission for Latin America, British Labour Party leader Jeremy Corbyn, former Brazilian President Luiz Inácio Lula da Silva, and the US Centre for Economic Policy Research, among others.

A broken market
So what should the world learn from the country’s descent into misery? In short, Venezuela is the poster child of the perils of rejecting economic fundamentals. One of those fundamentals is the idea that, to achieve social goals, it is better to use – rather than repress – the market. After all, the market is essentially just a form of self-organisation whereby everyone tries to earn a living by doing things that others find valuable. In most countries, people buy food, soap and toilet paper without incurring a national policy nightmare, as has happened in Venezuela.

But suppose you do not like the outcome the market generates. Standard economic theory suggests that you can affect it by taxing some transactions – such as, say, greenhouse gas emissions – or giving money to certain groups of people, while letting the market do its thing.

In Venezuela, subsidies for gasoline and electricity are larger than the budget for education and healthcare combined

An alternative tradition, going back to Saint Thomas Aquinas, held that prices should be ‘just’. Economics has shown that this is a really bad idea, because prices are the information system that creates incentives for suppliers and customers to decide what and how much to make or buy. Making prices ‘just’ nullifies this function, leaving the economy in perpetual shortage.

In Venezuela, the Law of Just Costs and Prices is one reason why farmers do not plant. For that reason, agro-processing firms shut down. More generally, price controls create incentives to flip goods into the black market. As a result, the country with the world’s most extensive system of price controls also has the highest inflation, as well as an ever-expanding police effort that jails retail managers for holding inventories and even closes the borders to prevent smuggling.

What the people want
Fixing prices is a short, dead-end street. A longer one is subsidising goods so that their price remains below cost.

These so-called indirect subsidies can quickly cause an immense economic mess. In Venezuela, subsidies for gasoline and electricity are larger than the budget for education and healthcare combined; exchange rate subsidies are in a class of their own. With one daily minimum wage in Venezuela, you can buy barely a half-pound (227g) of beef or 12 eggs, or 1,000l of gasoline or 5,100kWh of electricity – enough to power a small town. With the proceeds of selling a dollar at the black market rate, you can buy over $100 at the strongest official rate.

Under these conditions, you are unlikely to find goods or dollars at official prices. Moreover, since the government is unable to pay providers the necessary subsidy to keep prices low, output collapses, as has happened with Venezuela’s electricity and health sectors, among others.

Indirect subsidies are also regressive, because the rich consume more than the poor – and hence appropriate more of the subsidy. This is what underpins the old orthodox wisdom that, if you want to change market outcomes, it is better to subsidise people directly with cash.

Another bit of conventional wisdom is that creating the right incentive structure and securing the necessary know-how to run state-owned enterprises is very difficult, so the state should have only a few firms in strategic sectors or in activities that are rife with market failures. Venezuela disregarded that wisdom and went on an expropriation binge. In particular, after former president Hugo Chávez was re-elected in 2006, he expropriated farms, supermarkets, banks, telecoms, power companies, oil production and service firms, and manufacturing companies producing steel, cement, coffee, yoghurt, detergent and even glass bottles. Productivity collapsed in all of them.

Misguided strategies
Governments often struggle to balance their books, leading to over-indebtedness and financial trouble – yet fiscal prudence is one of the most frequently attacked principles of economic orthodoxy. But Venezuela shows what happens when prudence is frowned upon and fiscal information is treated as a state secret.

Venezuela used the 2004 to 2013 oil boom to quintuple its external public debt, instead of saving up for a rainy day. By 2013, Venezuela’s extravagant borrowing led international capital markets to shut it out, leading the authorities to print money. This caused the currency to lose 98 percent of its value in the last three years. By the time oil prices fell in 2014, the country was in no position to take the hit, with collapsing domestic production and capacity to import, leading to the current disaster.

Orthodoxy reflects history’s painfully acquired lessons – the sum of what we regard to be true. But not all of it is true. Progress requires identifying errors, which in turn calls for heterodox thinking. But learning becomes difficult when there are long delays between action and consequences, as when we try to regulate the water temperature while in the shower.

When reaction times are slow, exploring the heterodox is necessary, but should be done with care. When all orthodoxy is thrown out the window, you get the disaster that was the Chinese Cultural Revolution – and that is today’s Venezuela.