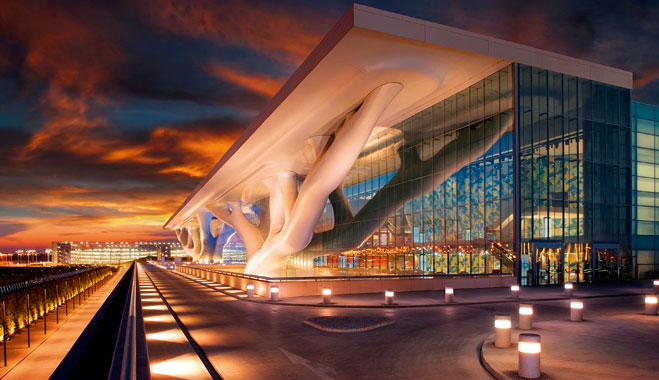 The Qatar National Convention Centre (QNCC), a member of Qatar Foundation for Education, Science and Community Development, officially opened its doors on 4th December 2011. Already, the Centre has hosted a number of high-profile events, and to date, over 60 events with more than 55,000 visitors have been held at the Centre. The estimated economic impact  from overseas visitors is over QR41m (US11.2 m).

This year, the Centre will play host to a number of prestigious international events including the United Nations Conference on Trade and Development (UNCTAD) from 21st-26th April, the 25th Universal Postal Congress (UPU) in September and October, 2012 and the UN Framework Convention on Climate Change (COP 18) from 26th November-7th December, 2012.

The Centre was launched in conjunction with the opening of the triennial 20th World Petroleum Congress which saw 5,244 delegates from 95 countries attend the Congress, which is also known as the ‘Olympics’ of the petroleum industry. In addition, the event attracted 674 media representatives, record sponsorship, used 35,000sq m of exhibition space and attracted 21,894 visitors to the exhibition.

Leading up to the official opening, QNCC hosted three major events including the Teachers of English to Speakers of Other Languages (TESOL), World Innovation Summit for Education (WISE) 2011 and The Hague International Model United Nations Conference (THIMUN) 2011.

During this period, one of a limited number of Maman sculptures by world-renowned contemporary artist Louise Bourgeois was also unveiled in the Centre. This nine-metre-high steel spider is a permanent feature in the central foyer of QNCC.

Adam Mather-Brown, General Manager said: “There are exciting times ahead for Qatar as a growing destination. While many countries are still recovering from the economic downturn, Qatar’s economy has stabilised. Doha is a highly desirable destination for business investments and tourism and offers world-class facilities and services with an authentic Arabian atmosphere.

He added, “Compared to many other countries, Qatar is undoubtedly one of the safest in the world and consistently ranks high in the Global Peace Index. And we know, today, this is one of the key factors for business travellers and for the Business Tourism industry.”

According to Qatar Tourism Authority, the country recorded a substantial jump in the number of visitors in 2011. Visitors from the Gulf region soared by 50 percent compared to the previous year and an increase of 12 percent for the international visitors. Business tourism accounted for 72 percent of the number of visitors received by Qatar last year.

Transforming the future
In support of Qatar’s transformation to a knowledge-based economy, Qatar Foundation (QF) has made significant achievements in building and developing capacity for creativity and critical thinking through research in education and science. As a member of Qatar Foundation, QNCC advances these objectives as the new global hub for ideas and innovation.

QNCC was designed by renowned Japanese architect Arata Isozaki, who took inspiration from Qatar’s beloved icon, the Sidra tree. The spectacular façade resembles two intertwined trees reaching up to support the exterior canopy. The tree is a beacon of learning and comfort in the desert and a haven for philosophers and scholars to share knowledge under its branches.

QNCC was conceived with a focus on sustainability. The Centre was successfully built according to gold certification standards on Leadership in Energy and Environment Design (LEED), endorsed by the US Green Building Council. The building is designed to operate efficiently with environmentally friendly innovations such as water conservation and energy-efficient fixtures.

The Centre also offers fully flexible and adaptable space options to suit a wide variety of conferences, meetings, exhibitions, full-scale theatrical productions, concerts and gala events. QNCC can host meetings for 10 people to conferences for 10,000 people. Located alongside elite universities and research institutions in Education City, QNCC is furthering Qatar Foundation’s mission to turn Qatar into one of the most vibrant economies in the world. This will be achieved by becoming the convention venue of the future, culminating the value of education, research, and technology into a global hub for ideas and innovation.