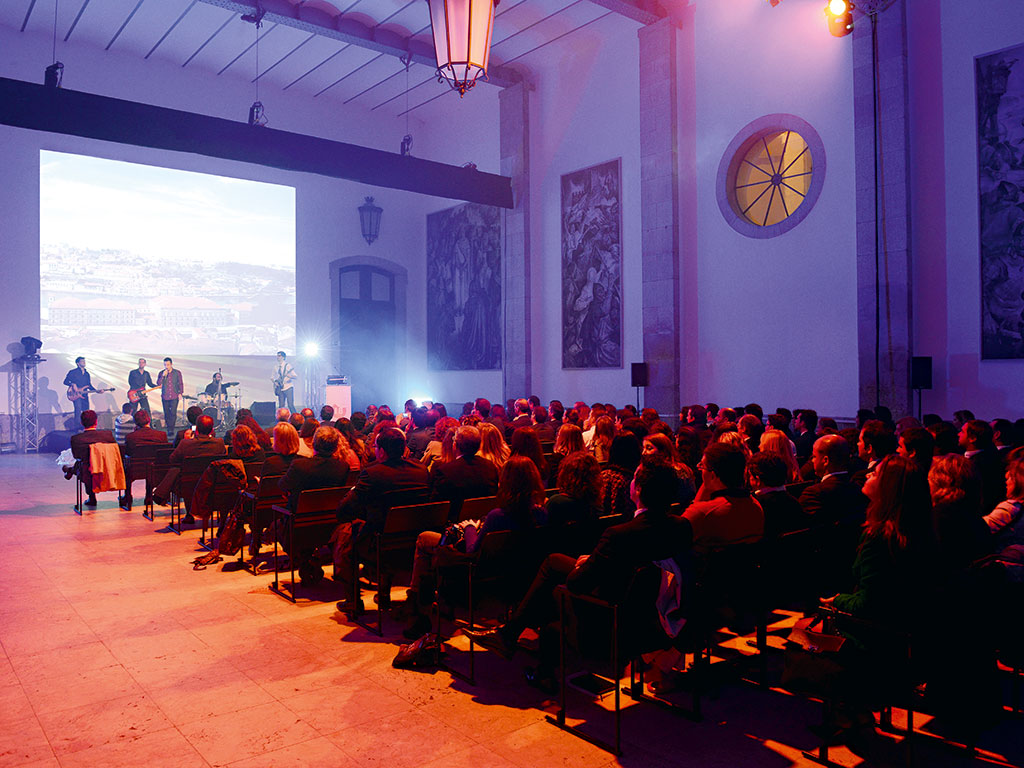 Situated on the bank of the Douro River, the third-longest river in the Iberian Peninsula and part of the national borderline between Spain and Portugal, the Alfândega Porto Congress Centre is located in what was once Porto’s sprawling customs house. The building, which was completed in 1869 as the work of French architect Jean Colson, was transformed into the vast conference centre in 1992, and to this day the centre holds a keen focus on maintaining and preserving one of the biggest and most revered buildings in the north of Portugal.

The Alfândega Porto Congress Centre has now been voted the Best Meetings and Conference Centre, Europe in the Business Destinations Travel Awards for two years running, in 2014 and 2015. Its unique architecture and outstanding meetings and events facilities, including its audio-visual partnerships, knowledge of the local area, value for money, online presence, sustainability practices and beautiful location, are just some of the first-rate factors that helped the centre to secure this title for a second year in a row.

Maintaining roots
Transforming a 19th century customs house into a fully functioning congress centre is by no means an easy task. However, the renovation team at Alfândega Porto – led by Portuguese architect and Pritzker Prize laureate Eduardo Souto de Moura – successfully managed to create one of the continent’s most beautiful and functional congress locations, while still wholly maintaining the original charm of the old customs house. The building’s corridors still have the railway tracks that transported goods from the river into the city nearly 150 years ago embedded in their floors, and its rooms are named after its 19th century functions. Nowadays, the Archive Hall (the customs house’s warehouse), Noble Hall (its reception room) and Despachantes Hall (which was used by customs agents to coordinate the transit of goods) play host to a wide variety of national and international events.

Souto de Moura and the team that worked on the site’s renovation in 1992 still play a key role in the upkeep of Alfândega Porto. Their main aim is to preserve its fascinating history by keeping the building in good condition. Signs of the centre’s past are present throughout its 50,000sq m. area – the largest and most flexible space of its kind on the Douro riverside. Alfândega Porto still maintains its original architecture, with the mix of iron, brick, wood and granite – reportedly used to represent the strength of Porto’s people – still evident across the site.

Internationally recognised
With 23 multifunctional rooms ranging in size from 80 to 2,000sq m., a private 400-car parking area, a shipping dock and four permanent cultural exhibition spaces, this historic venue has been the first choice for an endless stream of corporate meetings, product launches, medical congresses and fashion shows over the last 23 years. To ensure that it is equipped to host over 300 large-scale events every year, Alfândega Porto focuses on remaining up to date with the latest demands and developments within the international MICE sector – this has included the recent installation of total Wi-Fi coverage and built-in translation booths. In addition, the venue’s experienced and professional team is on hand during the organisation and instigation of every event, providing technical expertise and logistical assistance.

In the last year, over 300,000 people visited the venue for a range of cultural, scientific, corporate and commercial events, awarding it an overall satisfaction rate of 97 percent. Alfândega Porto’s focus on client feedback and providing customer satisfaction is one of the keys to its success; guaranteeing that each visitor will be pleased to return for another event. Earlier this year, the International Association of Professional Congress Organisers (IAPCO) named the congress centre as its National Supplier 2014; an accolade based on its outstanding service and cooperation. Alfândega Porto was the first Portuguese company to ever receive this award. The centre was also named as the best venue for congresses in the country in 2011, 2012, 2013 and 2014 by the Publituris Portugal Trade Awards and Gala dos Eventos.

In the heart of it all
Alfândega Porto Congress Centre is proudly situated in the award-winning city of Porto. Voted Europe’s Best Destination 2012 and 2014 by European Consumers Choice, Porto is home to unique architecture, history, culture and cuisine that make it quite unlike the majority of Europe’s other major cities. The city’s blend of tradition and modernity, along with its status as a UNESCO World Heritage site, is a major part of its appeal to business travellers and tourists alike – as such, Porto’s ICCA ranking has been progressively climbing over the last three years.

Francisco Sá Carneiro Airport, voted the third best European airport by Airports Council International, is located only 15 minutes away from the congress centre. Offering direct routes to cities all across the world, the airport’s close proximity means that Alfândega Porto is ideally connected to a huge number of global business hubs. Additionally, many of the hotels in the congress centre’s vicinity have been celebrated internationally, while many of the city’s finest sights are also located within walking distance of the venue. These include the D Luís Bridge, which was designed by a pupil of Gustave Eiffel and is located only five minutes away from Alfândega Porto; the Clérigos Tower, which offers magnificent panoramic views of the city; and a selection of must-visit port cellars.

Continually evolving
Other than the nearby international airport, Alfândega Porto has access to a range of convenient transport links, making it easily accessible from both the surrounding area and regions that are slightly further afield. It is also surrounded by some of the city’s finest social programme possibilities – anything from walking tours through Porto’s historic streets to boat trips to the magnificent Douro Valley are on offer within minutes from the centre’s foyer. Even inside the venue itself tours are available, giving visitors the chance to truly experience the former customs house’s 19th-century charm.

The evolution of the conference centre has been rapid and continuous. With such extensive developments occurring year-on-year and with its consumer popularity only growing, the Alfândega Porto Congress Centre now foresees a very positive future ahead, both for itself and for the fascinating city of Porto. Breaking into the international MICE market was one of the centre’s main ambitions for 2014, and this is something that it will continue to focus on for the coming years. With investment in the market constantly increasing, Alfândega Porto is more equipped than ever to accommodate some of the area’s most high-profile events.