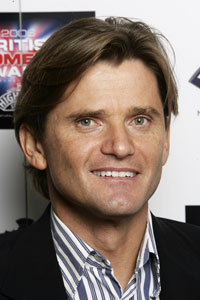 Before being head-hunted for a secretive hedge-fund based in Bermuda, Farleigh’s financial success enabled him to retire to Monaco at the enviable young age of just 34. He went on to dabble in further projects and became a household name after starring as an investor in Dragons’ Den, backing Levi Roots and his now famous Reggae Reggae Sauce. Currently a member of the Business Review Weekly ‘Rich 200’ list (the 200 wealthiest Australians), Richard Farleigh talks to Angela West about his business successes, failures, tips and destinations.

From ‘backward child’ to chess champAt 10, he wanted to be a bushranger, “A kind of Aussie Robin Hood”, at 20 “an academic”, at 30 “a master of the universe hedge fund manager…oh, and at 15, a religious minister!” he recalls. Born in the country town of Kyabram, in the state of Victoria in 1960, Richard Buckland Smith (his middle name a nod to ancestors traced back to the infamous Rum Corps rebellion) was one of 11 siblings. He never knew what it was like to have a proper home with his natural family, who travelled around the countryside in an old truck, the children exposed to the elements except when they made camp and sheltered in a tent.

His father, a shearer/seasonal labourer/opal miner, was a violent alcoholic and Richard’s first memory of him was one of ‘fear’. Before he was born, a baby sister had died after drinking bad water from a river. When he was two, all of the children were taken into care and separated. Shortly afterwards, Richard was fostered by Marjorie and Keith Farleigh from Sydney’s south-western suburbs. They were initially to look after him for a few months until his parents reclaimed him, but Richard succumbed to a bad bout of measles, during which one of his eyes ‘turned’, forcing him to wear a patch. Confined to a darkened room with daily doctor visits, it needed two operations to correct it, by which time he was five years old.

Now at school, Marjorie decided this fragile little boy needed her and would be staying. Richard’s relationship with his foster father, however, was never close and there was a brief, tense reunion with his biological parents when he was four but it wasn’t until adulthood that he made contact with his other siblings. His mother died in the 1990s and he lost track of his father.

His timidity, low self-esteem and unwillingness to speak was misinterpreted as an indication of being ‘backward’, and Richard was placed in the lowest class at kindergarten. At the age of eight, however, he was thrown a lifeline when his primary school teacher spotted his aptitude in mathematics and recognised his potential.

The main turning point came four years later, when his brother Peter taught him to play chess. This new-found skill was to change his life. Unhappy at school, chess made Richard feel better about himself and this new hobby fast turned into a passion.  He took the title of Junior State Champion and travelled the country attending tournaments, making new friends and gaining confidence: “I started to hustle the hustlers in the park!,” he tells me, which is when he realised his natural ability for making money. “I didn’t learn so much about business, but a lot about psychology!” Years later, he represented Bermuda and Monaco in the Chess Olympics.

Trading timesAfter high school, Richard earned himself a generous scholarship from the Australian central bank to study economics at the University of New South Wales. Graduating with first class honours in economics and econometrics, he accepted a job with Bankers Trust Australia, the leading Australian investment bank at the time: “My best career move was declining a PhD scholarship in economics at Princeton and entering the ‘real’ world of finance.”

Still coy and lacking confidence, the 23 year-old began working in derivatives, where the CEO allegedly expressed doubts as to whether he would prove successful. But as Richard’s confidence grew, so did his risk-taking, reputation and earnings. He became the bank’s biggest single money earner.

Initially, he didn’t think he could out-perform the markets, believing investment and trading to be just gambling. But he gradually learned to predict the market and, within a few years, was running a trading desk dealing with hundreds of millions of dollars.

Cool-headed Richard developed a methodology based on observation and reasoning, as opposed to luck, and many of his assumptions contravened conventional wisdom. His modus operandi was forward-looking and he possessed a knack for having a very clear view of how the market would unfold. He says he was a fundamental, rather than a technical trader, and didn’t like charts, dubbing them ‘hocus-pocus.’

His approach to investment was based on first principals and he developed trading systems, some of which were still being used years after he left the bank. Cool-headed Richard tried to outperform other investors: “You can measure your performance very clearly. I love the markets, the interplay of economics, politics and psychology.” He says he doesn’t get a big buzz out of the taking huge financial risks: “I’m not a gambler. I try to understand and manage risk.”

Richard still uses the same approach today and advises private investors to buy into the big trends: “Treat the first year as a research project. Spend as little as you can as you verify if the idea is sound.”

Bermuda beckons
By his early 30s, Richard was earning a seven-figure sum as the star trader when he was headhunted for a powerful and secretive international hedge-fund on the idyllic island of Bermuda, where he spent three years refining his trading style.

Dubbing this tax haven period ‘trader’s heaven’, Richard did well enough to to retire to Monaco with his then wife Sharon and baby son Thomas: “I got lucky as the world of finance took off in the 1980’s just as I graduated with a degree in economics/maths. Now, it’s a fashionable degree…back then it wasn’t. My worst career move was maybe leaving the hedge fund world in 1995. Otherwise, I’d probably be a billionaire!”

So how’s his French? “I speak a bit after living in Monaco for 12 years, but it should be better,” he admits.  “I live in London now, but I loved the sunshine, the water and nearby mountains, the short distances, the safety and the glamour! You’re always bumping into somebody (famous)…”

Richard’s ‘boys’ toys’ in Monaco included Ferraris and a yacht bought from Michael and Ralf Schumacher, but he has no plans to replace them: “I’ve become more spiritual, I guess, and now think of the ‘poverty of possessions’. They tie you down.”

Home house & other projects
Whilst in Bermuda, Richard befriended chess grand master, David Norwood, with whom he later collaborated on technology spinouts. They formed IndexIT to fund the ventures, selling it a year later to Beeson Gregory for £20m.

Richard became one of the most successful and prolific private equity investors in high technology start-ups. Another unique opportunity arose in the form of a renovation project, a rundown Georgian mansion on the world’s 100 endangered buildings list, which had once housed the French Embassy. Richard turned it into a successful private members’ club and Home House became London’s most sought-after venue, with a celebrity membership list including Madonna and Brad Pitt, along with dotcom millionaires.

Richard also once bought a diamond mine in Sierra Leone: “It was partly a charitable venture and I paid the workers double the normal. But I lost it in the civil war there and two of my workers were killed.”

In addition, he invested in the world’s largest collection of uncut sapphires, 600,000 of the gems, which were a ‘bad investment’: “They’re in a bank vault in Michigan. One of these days I’ll get around to doing something with them!”

Enter the dragon!
In 2006, Richard featured as an investor on TV show Dragons’ Den, looking to discover ‘the next big thing’. He became the popular ‘dragon’, coming across as the calmest and nicest, offering constructive criticism, rather than the unforgiving disapproval some of the others are known for and making the most offers: “I try to leave a trail of happiness behind me. A lot of people helped me in life, and I remember that.”

He says most of his efforts go into assessing the person, rather than the product: “There are a lot more interesting product ideas than people who can successfully get them to market.”

The phenomenal rise of Rastafarian musician, Levi Roots, following his appearance on the show is one of the most heart-warming business success stories to date. Richard and Peter Jones backed his Reggae Reggae Sauce, which became Sainsbury’s fastest-ever selling product. Richard sold his stake in the business for around a ten-times return a year later. Richard continues to back small companies and this year appeared on TV again, this time showing off his culinary skills on Celebrity Masterchef.

Business travels
Richard’s favourite travel gadget is his iPad and he never gets on a plane without music and newspapers. His top business travel tip: “Get to the airport early. It’s not worth the stress to fine-time it.”

Does he believe business communication will ever evolve so as to make business travel redundant? “I lived a long time in Monte Carlo but came here all the time for meetings. Even though video calling’s improving, you need to see more than the face…things like body language, the state of the offices and how happy the secretaries are.”

He’s a big fan of Italy: “They’ve got history, fashion and charm without the attitude of some of their neighbours, you might say. Although I’d never go back to Sicily, which seems to lack charm and the food’s terrible! But I do love the rest of Italy.”

His business travels include whistlestop visits: “I flew from Moscow back to London (to avoid Aeroflot) then to Sydney and on to the surf coast. It took about 40 hours and the temperature went from -20 to +30!,” along with A-list business travel tales: “I sat next to Posh and Becks on BA not long after they famously lost their luggage. You’d have thought the flight attendants were personably responsible.”

He says the best thing about being an entrepreneur is “the people you meet and the bizarre and beautiful ideas you come across,” and he’s inspired and motivated more by experiences than money or positions: “I’m lucky…I’ve been an economist, investment banker and business angel, played in the Chess Olympics, written a book and been on the telly!”