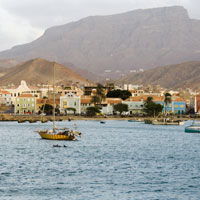 Unscathed by conflict or political instability, Cape Verde has quietly become a middle-income nation and looks set to be one of few in Africa to meet any of the Millennium Development Goals set for measuring progress in improving livelihoods. Yet it has loftier ambitions.

In return for special deals on economic and political cooperation with Europe, it increasingly plays a trouble-fixing role on the more unruly mainland some 400km away. It hopes to turn its location to its advantage by becoming a springboard for business in West Africa. And it thinks tourist numbers could soon match the country’s population.

“The fact that we don’t have resources has made us be creative,” Fatima Fialho, Cape Verde’s minister for tourism, industry and energy, says. “We are an economy in transformation – moving from one of aid to one of production,” she added, detailing plans for a service-based economy focusing on shipping and fisheries, providing a hub for technology, finance and tourism.

Economic growth for 2010 will be five-six percent, she says. The country is not without its challenges. The lack of rain still means over three quarters of its food is imported. Cape Verde’s response to the financial crisis has been to accelerate its public investment programme, known locally as the nation’s “air bag”. This has delivered an impressive upgrade of infrastructure, but also rising debt levels.

Fitch ratings said in May a fiscal deficit of 12 percent of GDP in 2010 and 2011, and central government debt at 78 percent of GDP by the end of next year, should ensure long-term growth but will increase pressure for sound management.

Poor, but successful
After other African nations with similarly small populations but far higher revenues, mainly from oil, failed to use vast sums of money to benefit the country outside a tight-knit elite, the nation is being heralded as a non-resource success story. In April, the African Development Bank (AfDB) called Cape Verde the first African case of “policy induced graduation”.

“Here is evidence that no matter how bad the initial conditions, with good governance, solid institutions, and a peaceful political and social climate, take-off is possible,” Donald Kaberuka, AfDB group president, said during a visit.

Ahead of elections next year, Jorge Santos, deputy head of the MpD opposition party, is quick to express confidence in the political system, saying there is no comparison in the region. Donor aid has played a key role in its success. But so too have payments from its diaspora – believed to be double the 500,000 Cape Verdeans living at home. Many left the country due to hardship there and, spread out across the globe, send millions to families back home every month.
Even after taking a hit from the global crisis, remittances amounted to $172m in 2009, having averaged 12.3 percent of GDP between 1999-2008, according to the AfDB. But Fialho said that tourism has just overtaken remittances as the biggest contributor to the economy at around 20 percent of GDP. Ever since Italian dictator Benito Mussolini built the first airport on the island of Sal, Italians have dominated tourism there. Charter flights from around Europe jet in to a number of gleaming new airports, ferrying most of the 330,000 tourists in 2009 to all-inclusive hotels on sun-blessed beaches.

Some in the industry grumble that vast hotels, like a 4,500-bed all inclusive resort being built for Spanish firm Riu on Boa Vista, are wrecking the charm of the islands. “This is not very good for local communities – they only stay in the hotels. They don’t learn about our cultures… we must not move too fast,” said Lindorfo Olivio Marques Ortet, who owns a hotel for walkers in mist-shrouded hills above Praia. But Fialho argues that mass tourism was essential to get the country on the map, and the focus is now on improving services to meet a target of 500,000 visitors a year by 2012.

Link to the region
Uninhabited until it was discovered by Portuguese mariners in the 1450s, the country’s population is a mix of settlers and former slaves, a combination that means tribalism is not an issue. Yet many speak of Africa as a separate continent and have far more links with Europe or the Americas. The national airline, for example, flies directly to Brazil, the United States and a number of airports across Europe, but just one in Africa.

The islands, however, are becoming an increasingly important strategic partner for the African mainland but also for outsiders looking to strengthen their African links. “What Cape Verde can bring to the region is a bridge,” according to Foreign Minister Jose Brito.

A visit by Brazil’s President Luiz Inacio Lula da Silva in July highlighted the role Cape Verde could play as a springboard into West Africa. But Europeans and the United States also see the country as a barrier against the flow of drugs and people. Cape Verde was the first West African nation used to transit cocaine headed to Europe, and has since been widely praised for cracking down on corruption and improving law enforcement.

In July, it helped the United States by receiving a Syrian prisoner from Guantanamo Bay. The country is also increasingly active in seeking to resolve African conflicts, such as in Guinea-Bissau. In return, Praia has secured a special partnership with Europe and is the first country to be made eligible for a second round of funding from the US Millennium Challenge Corporation.

Brito said it was in Europe’s interests to have a special relationship with Cape Verde, especially in having a real partner in fighting crime, and the country would seek to meet EU standards, but was not looking to join the institution. “We are an African country…Cape Verde cannot be alone, separate from what is happening in (the region).”