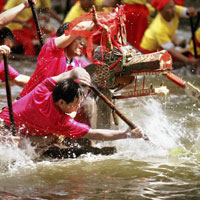 Dragonboating originated more than 2000 years ago in China as a ceremony for worshipping deities of the sea.

Associated with the Tuen Ng Festival, celebrated in late spring when flood waters and disease once ran rampant, dragonboating was a way to dispel fog and corrupted air and please the gods. Traditionally considered to be rulers of the river and seas, the dragon plays the most venerated role in Chinese culture and tradition.

Rowers of dragonboats would beat drums to signify the heart of the beast, often fighting pitched battles with bamboo canes and stones in a bid to oust other teams from the competition. Anyone who fell into the water was provided with no assistance and those who drowned were considered sacrifices to the prevailing will of the dragon spirits. Most Chinese when asked about the history of dragonboating will however refer to the story of Qu Yuan, a loyal statesman who drowned himself in the year 278 BC upon learning of the downfall of his beloved kingdom. Worried that his soul would go hungry, locals threw rice dumplings into the water, now a festive delicacy, and races have traditionally been held on the fifth day of the fifth month of the lunar calendar to commemorate him. These days however, the races are becoming an increasingly popular and frequent sport around the world.
Modern development
A new era of dragonboat races was heralded in 1976, when Hong Kong held the international dragonboat race event.
Over the coming decades the popularity of the race grew to incorporate Japan, Malaysia and Singapore, later spreading as far afield as Australia and Canada and the US. Three dragonboats from Hong Kong even made their debut on the river Thames in 1980. Today around 400 teams compete in over 20 races throughout the year in Hong Kong, which has successfully managed to incubate the heritage of the sport. Despite a boom in popularity, Hong Kong is still considered one of the best places to sample the passion and cultural fervour that exported this audacious past time to the rest of the world.

Heritage and the sport today
Around 90 percent of boats in the Hong Kong race are still crafted from traditional wood, but modern fibreglass designs are becoming more common further afield. Perhaps one of the most enchanting aspects of dragon boating is just how little the design of the craft has changed over the centuries. Long and slim with a beautifully ornate dragon’s head protruding from the bow and a tail affixed to rear, the elegance of the boat is juxtaposed by two rows of frantic paddlers and a drummer placed either at the front or middle. It’s a display that transcends the clinical feel that often afflicts modern sports and exudes the primordial passion that makes dragonboating an exhilarating experience for both participant and spectator.

Women, especially when pregnant or menstruating, were traditionally forbidden from touching a dragon; regarded as a symbol of male vigour. Since 1985 however, races in Hong Kong have included women’s and mixed teams and the sport has conformed to an international competition structure, with races ranging from 200m to 2000m and adhering to the formal Rules of Racing. Vessels come in three sizes with the smallest holding 12-crew, moving up to 22-crew for international races and ‘big dragons’, which carry up to 50 men who keep the machismo aspect of the sport alive; exclusively tending to their boats and guarding them with jealousy.

More information about dragonboating can be obtained from the International Dragonboat Federation at www.idbf.org

Eat and drink
Aqua, 1 Peking Road, Tsimshatsui, Tel: 852 3427 2288
Ever popular with visitors and locals alike, this chic bar and restaurant is definitely one of Hong Kong’s best places to be seen. Breathtaking views over the city’s skyline make Aqua Spirit are an attraction in itself, so it’s well worth stopping by for one of their award winning cocktails or Asian-European fusion cuisine.
Dinner around £50.
Spring Moon, The Pensula Hong Kong, Salisbury Road, Kowloon, Tel: 852 2920 2888
Famed for its Peking duck and dim sum and situated in the pristine surroundings of The Peninsula Hotel, guests rave about Spring Moon’s authentic Cantonese cuisine. The 1920s décor adds to the hugely civilised surroundings of this beautiful hotel.
Dinner around £100.

Opus Grill, Seventh floor, LKF Tower, 33 Wyndham Street. Tel: 852 2526 2366
Another high rise affair, steak houses have been popping up all over Hong Kong of late. Opus boasts exclusive sourcing from boutique US producer Bryan Flannery and one of Hong Kong’s largest wine selections. Widely regarded as offering some of the best steak in region, diners also delight the at foi gras and truffles on offer.
Dinner around £90.
Dong Lai Shun, B2, The Royal Garden, 69 Mody Road, Tsim Sha Tsui. Tel: 852 2733 2020
A fresh and contemporary take on imperial northern Chinese décor allows the food to take centre stage in this well turned out venue. Those feeling adventurous can sample some of the more obscure dishes available in Hong Kong, such as Huaniyang cuisine from Shanghai and the highly recommended tea-smoked yellow snapper.
Dinner around £90.