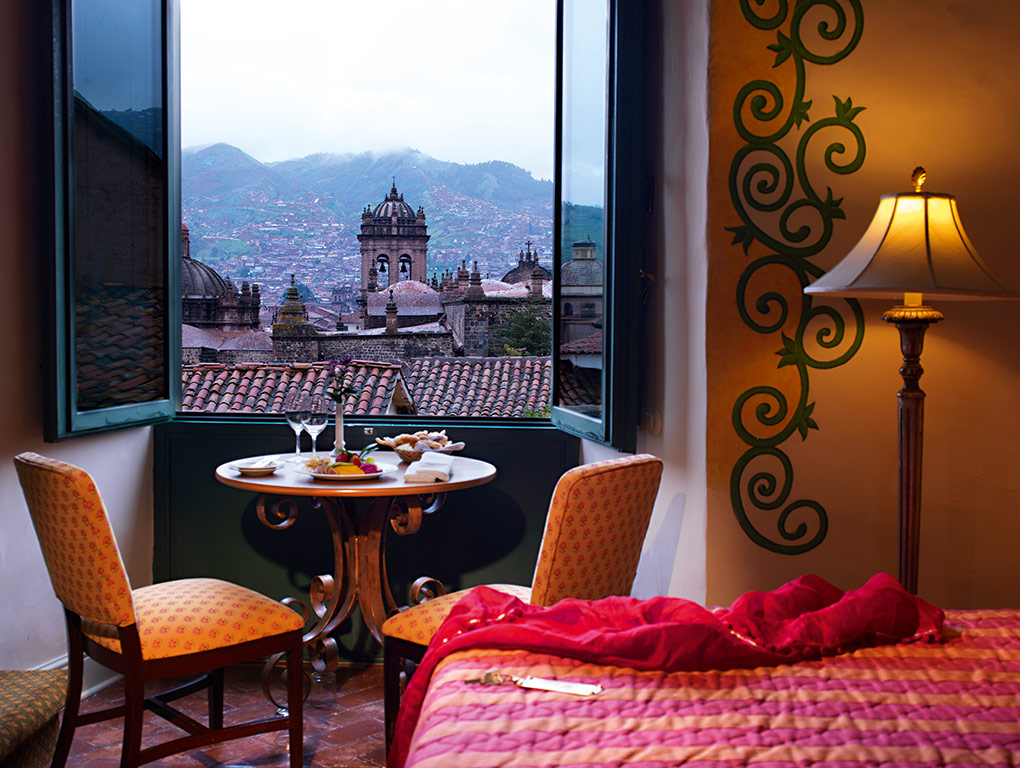 Cuzco is nestled high in the mountains, with an altitude of about 3,339m. To ensure guests enjoy the view without feeling sick, oxygen enrichment systems are on hand

This two-story hotel occupies a well-preserved monastery, built in 1595 on old Incan walls, and now an historic landmark protected by Peru’s National Institute of Culture. Situated in the centre of Cuzco, it is within walking distance of all the city’s most popular tourist sites, yet a secluded garden courtyard provides reprieve from the crowds. Guests can also relax in the hotel’s lobby lounge, where an open fireplace and complimentary coca tea create an inviting environment.

The hotel’s décor is equally alluring. Peruvian antiques and a well-curated collection of sixteenth-century paintings, in golden Baroque frames, adorn the walls, while the shapes and fabrics used in each room draw inspiration from the building’s religious past. Cuzco’s high altitude (about 3,339m), and the potential sickness that accompanies this, can put some off visiting.

Fortunately, Hotel Monasterio has developed an oxygen enrichment system, available (for an extra fee) in every guest room, to make your time there as comfortable as possible. The most luxurious accommodation are the Royal Suites, which boast marble bathrooms, huge private terraces and butler service.

Following an earthquake in 1650, which damaged the monastery building, serious restoration work was carried out and a chapel was added. This beautiful gold-plated enclave is now offered for weddings and even as an unorthodox conference venue. Alternatively, hold a more casual meeting in one of Hotel Monasterio’s delicious dining venues.

Cuzco (also called Cusco or Qosqo) is established by the Marcavalles. It’s the oldest city on the American continent, with 3,000 years of continuous habitation.

The Killke begin their rule of Cuzco, which lasts around three centuries. They construct Sacsayhuaman, a fortified stone settlement, in 1100.

The Incas conquer the city. Cuzco becomes capital of the Incan Tahuantinsuyu Empire and is divided into two regions – urin and hanan.

Troops from an opposing Incan community, led by Ecuador-born General Atahualpa, take the city in the Battle of Quipaipan in April.

The Spanish, led by Francisco Pizarro González, arrive in autumn and begin to colonise Cuzco. Incas stage a long siege before Spanish triumph.

Peru gains independence and Cuzco is named capital of an administrative area (Department of Cuzco), stretching to the Brazilian border.

Explorer Hiram Bingham discovers the ruins of Machu Picchu and Cuzco grows rapidly as numerous tourists are attracted to the region.