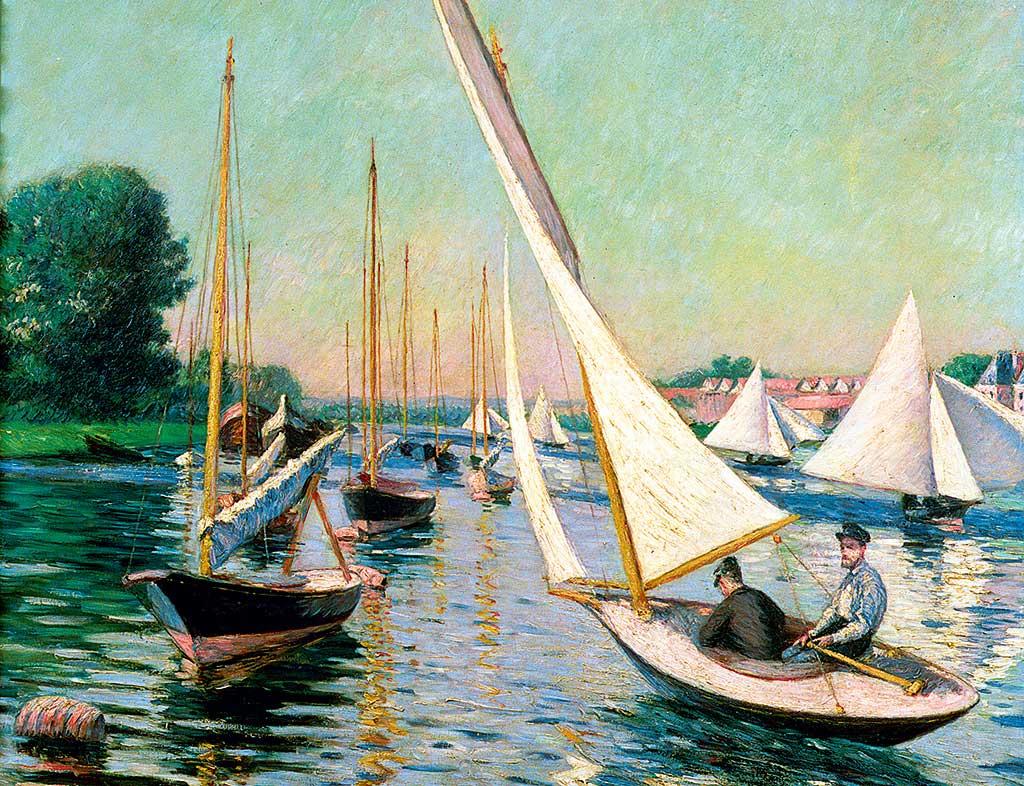 Detail from: Caillebotte, Regates a Argenteuil, 1893

Take a trip to San Francisco this summer and you will find a city obsessed with sailing. The world’s oldest sporting event, the America’s Cup, is coming to town for the first time in its 152-year history and it’s all hands on deck for the Californian metropolis.
To celebrate this momentous occasion, the Fine Arts Museums of San Francisco (FAMSF) is recalling another moment when the public imagination was gripped by sailing. Impressionists on the Water is a group show exploring how nineteenth-century painters, such as Claude Monet and Pierre-Auguste Renoir, engaged with sailing, yachting and other pleasure boating activities in their work. The exhibition is taking place at the Legion of Honour, a museum overlooking the mouth of San Francisco Bay from its enviable location on high ground in Land’s End park, in the far north-west of the city.

Wind in the sails
As settings go for such a show, this one is hard to beat. FAMSF has presented a number of impressionism exhibitions over the last few years, including Monet in Normandy at the Legion of Honour in 2006 and two shows at the de Young Museum presented jointly with the Musée d’Orsay in 2010 called Birth of Impressionism: Masterpieces from the Musée d’Orsay and Van Gogh, Gauguin, Cézanne and Beyond: Post-Impressionist Masterpieces from the Musée d’Orsay. But given the movement’s fascination for life on the water, not to mention the presence in FAMSF’s collection of numerous impressive examples of impressionist works addressing this motif, presenting a show on the subject was too good an opportunity to miss.

“It’s a really nice moment for the city to have this artistic and sporting
conversation,” says Melissa Buron, Assistant Curator of European Art at FAMSF. “There will be many people visiting the city to see the America’s Cup races that will hopefully be attracted to this exhibition as well.”

Featuring such paintings as Monet’s resplendent Boats Moored at Le Petit-Gennevilliers (Sailboats on the Seine), 1874, the show looks into the socio-cultural context that produced these works. Buron describes how the rise of the railway in the mid- to late-nineteenth century ushered in an era which he deems was dominated by “a new middle class” with the unique ability to engage in some of the new activities like boating, yachting and sailing. He continues: “And the impressionist artists, being so fascinated with modern life and capturing the world around them, get caught up in this fascination with leisure activity as well.”

Water works
The artists took part in the sport too, the show reveals, some even designing and building their own boats. Buron is particularly excited about a ‘half model’ of a boat called Le Roastbeef, built by the artist Gustave Caillebotte in 1892. The painting in which the craft appears, Regatta at Argenteuil, 1893, hangs alongside it. Also on display is a full-size skiff similar to the ones represented in other paintings by the artist.

The hope is that by presenting not just paintings but also boats, models and the plannings of works on paper, visitors will gain insights into the lives and passions of these artists. “We think that we know the impressionists so well because there have been so many ways of treating them in exhibitions, but this facet of the impressionists as sailors and artists and really partaking in the activities that they were representing in their compositions is a really important point to make,” says Buron.

Another reason that the impressionists were so drawn to this world was the enormous potential of water as a subject for their innovative new methods. These painters were seeking to capture the play of light on different surfaces, reflection and movement; water was the ideal motif with which
to experiment.

Onshore impressions
Yet not all the impressionists favoured waterscapes. While Monet was churning out his hugely atmospheric depictions of the coast, rivers and ponds, Camille Pissarro was focusing on rural landscapes populated by hardworking labourers. Pissarro was the only artist to be involved in all eight of the impressionist group exhibitions in Paris in the 1870s and 1880s and is considered by many to be the patriarch of impressionism, but he never achieved anything like the success of his contemporaries, either during his lifetime or since.

Guillermo Solana is the Artistic Director of the Thyssen-Bornemisza Museum in Madrid, which is presenting Pissarro – Spain’s first ever monographic of the painter – this summer. He acknowledges that the artist’s relative obscurity could be partly due to his more earthy focus.

“Impressionism could be much more spectacular applied to water – and more itself. Pure impressionism had to be a painting of water and Pissarro was too much of a builder, a constructor, to let himself go to those extremes of fluidness. That damaged his success for some years.”

Solana also points to Pissarro’s “profound interest in the life of the working classes” as the main characteristic that differentiates his work from the likes of Monet’s “very bourgeois-orientated painting”. It is therefore unsurprising perhaps that there are just two works by Pissarro in the Legion of Honour show, an exhibition with a strong emphasis on middle-class pastimes.

In praise of Pissaro
But despite being overshadowed during his lifetime and beyond, the artist is finally receiving the sort of attention many believe he deserves; Solana talks about “a movement to vindicate, to rehabilitate the figure of Pissarro” that’s been taking form in recent years. In 2011-12 in fact, the Legion of Honour presented Pissarro’s People, an exhibition exploring the artist’s interest in the human figure, with a particular focus on his political inclinations. Solana describes Pissarro’s work as “a different kind of impressionism” and is delighted to be able “to show this recovered Pissarro to the public, this artist coming back from oblivion”.

Central to the artist’s rebirth is the acknowledgment of his role as a painter bridging the gap between the French landscape tradition of the
nineteenth century and the next
generation. While it appears that Monet had no disciples to speak of, Pissarro surrounded himself with younger
artists – he was admired and looked up to by pioneers of modern art such as Paul Gauguin, Paul Cézanne and Vincent van Gogh. “He was the man of the future,” says Solana.

Impressionists on the Water runs from June 1 to October 13 at the Legion of Honor, San Francisco, US (legionofhonor.famsf.org). Pissarro runs from June 4 to September 15 at the Thyssen-Bornemisza Museum, Madrid, Spain (museothyssen.org)