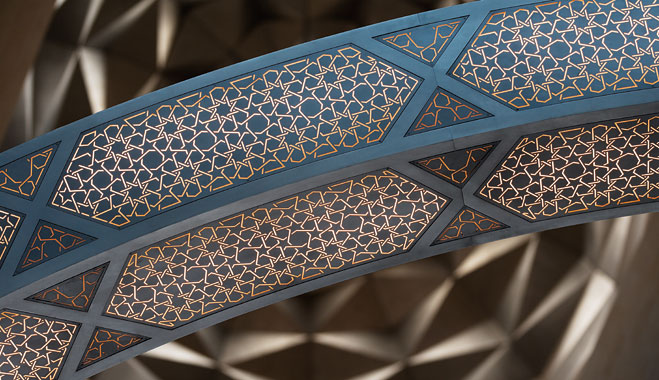 The Museum of Islamic Art is the flagship project of Qatar Museums Authority (QMA), which under the leadership of its Chairperson, H.E. Sheikha Al Mayassa, is transforming Qatar into a cultural hub in the Middle East. Qatar Museums Authority was created in December 2005 with the aim to combine the resources of all museums in the State of Qatar. The governmental organisation is leading plans to develop museums and cultural institutions along with an effective system for collecting, protecting, preserving and interpreting important historic sites, monuments and artefacts.

The Museum of Islamic Art is dedicated to reflecting the full vitality, complexity and diversity of the arts of the Islamic world. It is a world-class collecting institution, which preserves, studies and exhibits masterpieces spanning three continents and 13 centuries. As a centre for information, research and creativity, the museum aims to reach a wide global audience and serve as a hub for dialogue and cultural exchange.

The collection
Representing the full scope of Islamic art, the collection includes manuscripts, ceramics, metal, glass, ivory, textiles, wood and precious stones. Collected from three continents, including countries across the Middle East, and reaching as far as Spain and India, the museum’s artworks date from the seventh through to the 19th century. The pieces represent the diversity found in Islamic heritage and are of the highest quality.

The collection is exhibited on two floors of galleries that encircle the atrium of the museum. Visitors journey in time and across regions, through galleries dedicated to stylistic or historical themes.

Architectural gem
The museum is an architectural masterpiece 60m (195ft) built by I. M. Pei Architect (New York)and located  off Doha’s Corniche. It rises from the sea and is connected to shore by two pedestrian bridges and a vehicular bridge. A C-shaped peninsula which forms the MIA behind the museum offer shelter and a picturesque backdrop. At the end of MIA Park lies ‘7’, a 24-metre-high sculpture by Richard Serra.

The museum is composed of a five-storey main building and the two-storey Education Centre, which are connected across a central courtyard. The main building’s angular volumes step back progressively as they rise around a central domed atrium 50m (164ft) high. The dome is concealed from outside view by the walls of a central tower. A sheet of glass rises to a height of 45m (148ft) on the north side of the museum offering views of the Gulf and West Bay area of Doha from all five floors of the atrium. Ceilings are constructed of intricate cast-in place architectural concrete coffered domes, finished with individual molds.

At the top of the atrium is the circular oculus of a stainless steel dome, which captures facets of patterned light. The form of the dome changes as the structure descends, so its perimeter becomes an octagon and then a square, which in turn is transformed into four triangular column supports.

The Education Centre
The Education Centre allows the public to learn about Islamic art, the Museum of Islamic Art and its collection. It aims to become one of the main learning centres in Qatar. Its programmes, resources, delivery of courses, workshops, talks and activities help local communities play an active and informed role in encouraging new approaches to Islamic art. It also supports a culture of learning to promote the important role museums have in society as centres of knowledge and entertainment.

The Museum of Islamic Art also offers extended outreach programmes and activities to schools, universities and professional institutions to inform them of the essential role the Museum plays in preserving Islamic art and cultural heritage. Additionally, the Museum of Islamic art library has more than 6,000 publications. It will allow the community to have access to a comprehensive lending and borrowing service available to members, researchers and other users.

Inaugurating MIA Park
Officially inaugurated in December 2011, MIA Park is a new 62-acre (25-hectare) public space that has transformed the waterfront of Doha, Qatar. Developed by Qatar Museums Authority (QMA) and located on the grounds of the acclaimed MIA, the Park includes a sculpture plaza featuring a newly commissioned work by Richard Serra titled ‘7’, the artist’s first public work in the Middle East.

Free to the public, MIA Park opened in early January 2012 with a community-wide celebration, including: paddle boats, traditional Qatari folkdance and many other family activities throughout the park.

“MIA Park will be a dynamic place of learning and exploration for children, families and art enthusiasts, with cultural, educational and recreational activities designed to attract one and all”, said QMA Chairperson Her Excellency Sheikha Al Mayassa bint Hamad bin Khalifa Al-Thani. “We are especially proud that this new destination will feature an extraordinary work by Richard Serra, one of the leading sculptors of our time. Like the Museum of Islamic Art itself, Richard Serra’s sculpture will serve as a beacon for the arts in Qatar and will further the QMA’s mission to encourage global cultural exchange and introduce the Doha community to art from around the world.”

Designed by Pei Partnership Architects (New York), the crescent-shaped MIA Park curves from the MIA into Doha Bay. C.C. Pei, Partner, Pei Partnership Architects remarked: “Our mission was to work with Richard Serra to create a dramatic sitting for his monumental sculpture. At the same time we are setting the stage for a much larger park that will contain additional commissioned art pieces.”

The Park includes approximately one mile (2km) of lighted pedestrian stone pathways and a formal 2,600-foot (800m) palm-ringed cove promenade connecting the MIA to a 12-acre (5-hectare) man-made peninsula of geometrically shaped abstracted dunes unveiling panoramic views of the West Bay.  Jetting out into Doha Bay is a pier specially created to support Serra’s 7. The nearly 200-foot-long (60m), 79-foot-wide (24m) sculpture plaza on the pier is clad in honed Shanxi Black granite surrounded by water with an elegant set of stairs that rise up from the water’s edge on the south side of the plaza, facing the MIA.

MIA Park also features a children’s area with an interactive playground and a small cove created in Doha Bay for water activities. Two cafés and a kiosk will offer food, souvenirs and gift items. The Park will be furnished with outdoor furniture designed by Kettal, B+B Italia and Morosso.

Visitors also will enjoy complimentary Wi-Fi access throughout the park and interactive digital signage will be available with information on various activities taking place around Doha. Year-round public activities at MIA Park will include film screenings, sports events, storytelling programmes and art workshops. MIA Park will be developed in phases, with additional elements and amenities to be announced at future dates.