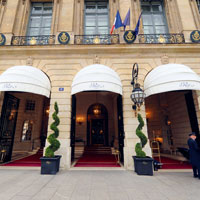 The Savoy, London
Located on London’s historic Strand in the heart of Westminster, the Savoy first opened its prestigious doors to the public in 1889 and has been a British cultural icon ever since. The original building was built by impresario Richard D’Oyly Carte, reputedly with the profits from his Gilbert and Sullivan operas and was in fact built on a plot of land next to the Savoy theatre that had been earmarked to house an electricity generator.

The state-of-the-art building was upon completion the first luxury hotel in Britain to feature electric lights and lifts, as well as bathrooms fitted with constant hot running water. Continuing its innovating trend to this day, a £220m refurbishment between 2007 and 2010 turned the hotel in one of the world’s greenest, with a combined heating system that has reduced its reliance on the national grid by up to 50 percent.

Legendary first manager Cesar Ritz is accredited with setting the high standards that drew high-profile clientele from royalty, the rich and famous and later even war-time leader Winston Churchill’s cabinet dinners from time to time. Subsequently, the Savoy has been host to more than a few lavish parties. For instance, in 1905 American millionaire George A. Kessler hosted a ‘Gondola Party’ where the central courtyard was made watertight and flooded to a depth of four feet, while two dozen guests dined in an enormous gondola. After dinner, it is said that Enrico Caruso sang, and a baby elephant brought in a five-foot birthday cake.

Later during the 20th Century, the Savoy became the staple place to stay for the rich and famous and well as some of the world’s greatest giants in the fields of art, music and literature from Marylyn Monroe and Charlie Chaplain to the Beatles and John Wayne. Bob Dylan also shot his innovative music video, the first of its kind, for the song ‘Subterranean Homesick Blues’ in an alleyway behind the hotel.

The full grandeur of the Savoy is still available to guests today and the hotel is currently run by the Fairmont group, offering 268 rooms with panoramic views of the River Thames and the city.

Hôtel Ritz, Paris
Founded in 1898, Hôtel Ritz overlooks the famous Place Vendôme in Paris, which was originally laid out as a monument to the armies of Louis XIV in 1702 and is considered today to be a classical masterpiece. The building in its current form was adapted by architect Charles Mewès, although the original façade was designed by royal architect Jules Hardouin Mansart. Today, the famous Imperial Suite is officially designated as a national monument by the French government.

The hotel shares somewhat of a sordid history with its English counterpart, the Savoy, as it was opened as collaboration between famous Savoy manager, the ubiquitous Cesar Ritz and chef Auguste Escoffier. Both would both later be dismissed from the London hotel after being implicated in the disappearance of £3,400 (£290,000 in today’s money) of liquor and spirits.

They subsequently went on to found the Ritz with the financial aid of Alexandre Marnier-Lapostoll, who ironically had created the now famous Grand Marnier liqueur years earlier. Upon its completion, and much like the Savoy, the Ritz claimed to be the first hotel in Europe to offer an en-suite bathroom, telephone and electricity in each room.

Several of its suites are named in honour of famous guests of the hotel, including Coco Chanel and Ernest Hemingway, who lived at the hotel for years and was once quoted; “When in Paris the only reason not to stay at the Ritz is if you can’t afford it”. Guest can still visit the famous Ernest Hemingway Bar today and his 1926 novel, The Sun Also Rises, also features scenes from within the hotel. The Ritz also proudly remembers Marcel Proust as a regular guest and was host to the filming of Love in the Afternoon, starring Audrey Hepburn in 1957.

No stranger to tragedy, the dark days of the Second World War and the German occupation saw the hotel taken over as the local headquarters of the Luftwaffe and its chief commander Hermann Goring as a lavish spoil of war. It was also the Ritz’s Imperial Suite that Diana, Princess of Wales and Dodi Al-Fayed, whose father Mohammed purchased the hotel for £20m in 1979, dined in before their fatal car accident on August 31st 1997.

Today Hôtel Ritz still offers is uber-exclusive five-star service, considered by many to be the finest hotel accommodation in the world. A jewel in the crown of Paris, the Ritz has firmly cemented itself in the fabric of the nation, and indeed the world.

Chelsea Hotel, New York
‘I remember you well in the Chelsea Hotel’, goes the famous Leonard Cohen lyric, and his philanderings with Janis Joplin are but a drop in the ocean for what is probably one of the most famous hotel in world for actors, musicians, artists and writers. Perhaps not as grand as its counterparts across the pond, the Chelsea Hotel more than compensates for this as a shining beacon of cultural heritage in the 20th Century.

Located in the trendy Chelsea district of New York, the 12-storey red-brick building was built between 1883 and 1885, opening as one of the city’s first private apartment cooperatives and becoming the tallest in New York upon completion. The distinct ornate iron balconies on the building set it apart from others in the city, while the magnificent grand staircase was created in the Victorian Gothic style. After financial stress caused the cooperative to close, the building re-opened as a hotel in 1905.

The Chelsea Hotel is famous for its long-term residents, who have, (to name but a few) included the likes of Dylan Thomas, Arthur C Clarke, who wrote 2011: A Space Odyssey there, William Burroughs, Leonard Cohen, Tom Waits, Stanley Kubrick, Jean-Paul Sartre, Charles Bukowski, Dennis Hopper, Jimi Hendrix, Andy Warhol and even survivors of the Titanic disaster as the hotel is close to Pier 54, where the ill-fated ship was due to dock.

The list of famous names and famous works that have resided in these star-studded walls is simply too long to attempt to list; safe to say that the building oozes the musty aura of counter-culture creativity like none other. In fact , the Chelsea Hotel is considered one of the top ten most haunted in the world – and with its legendary events, not to mention the deaths of Nancy Sprungen and Dylan Thomas, whose last words were said to have been “I’ve had eighteen straight whiskeys, and I think that’s a record!” There are numerous stories concerning ghostly entities in the hotel, in particular from room 100, where footsteps and the sound of a couple arguing loudly have repeatedly been heard despite it being empty.

Today the future of the hotel remains uncertain after its sale in May 2011 to real-estate developer Joseph Chetrit for $80m. All but a few of the permanent residents have left, although there are still a few hanging on despite repeated attempts to completely redevelop the building. The Chelsea Hotel is however still open for film shoots and monthly tours are available.