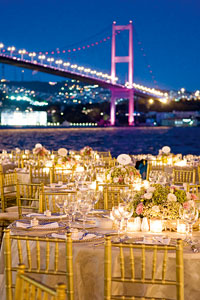 Situated along the shores of the Bosphorus in the quaint seaside neighbourhood of Ortaköy, The Marmara Esma Sultan carries the footprints of history with a stunning view, exquisite green gardens, ravishing interior décor, and unrivalled service quality, along with The Marmara’s signature flavours and tastes. This is where the city’s prestigious events and gatherings find their home.

The Esma Sultan Mansion’s rich historic fabric was preserved and brought back to life at the hands of The Marmara Collection. Recipient of the tourism industry’s prestigious Five Star Diamond Award, The Marmara Esma Sultan has been the exclusive venue for the city’s most reputable events, concerts, business dinners, meetings and weddings since 2001.

History
Taking its name after Esma Sultan, the daughter of the 32nd Ottoman ruler, Sultan Abdülaziz, the historic mansion has bore witness to a number of historic events and figures over time.

Sultan Abdülaziz’s daughter Esma Sultan was born at the Dolmabahçe Palace in 1873. When she was three years old, her father was forced to step down from the throne, and Esma Sultan was sent to the Harem in Abdülhamit’s Yıldız Palace. At the age of 16, she was married to Circassian Mehmet Paşa, an important political figure of the time, in the Ortaköy Mosque situated beside the mansion. The mansion was given to Esma Sultan as a wedding present.

When Esma Sultan died in 1899, Abdülhamit II passed the mansion on to his other daughter Cemile Sultan, and upon Cemile Sultan’s passing, it was imparted to her daughter Fatma Hanım Sultan. Finally, in 1915, the mansion was claimed from the Ottoman Empire, and in succession, was used as a Greek school in 1918, a tobacco depot in 1922; changing hands in the 1950s, it was used as a storage facility and carpenter’s workshop until it suffered a fire in 1975.

The Marmara Collection purchased the Esma Sultan Mansion in the early 90s. The building’s original character and floor plan was preserved, as it adopted a new cultural identity. In 2001, Philip Robert’s project saw the building undergo renovations from within, gaining a sturdy, yet classy iron and glass interior. This renovation allowed for the mansion to remain open all year-round.

Flaunting its original charming exterior with pride, The Marmara Esma Sultan is renowned for hosting the city’s most extravagant events of the year within its four interior glass walls and its beautiful gardens.

The Marmara Catering Service’s professional staff designs some of the most creative menus for each unique reception, as The Marmara’s award-winning chefs whip up a delightful array of dishes.