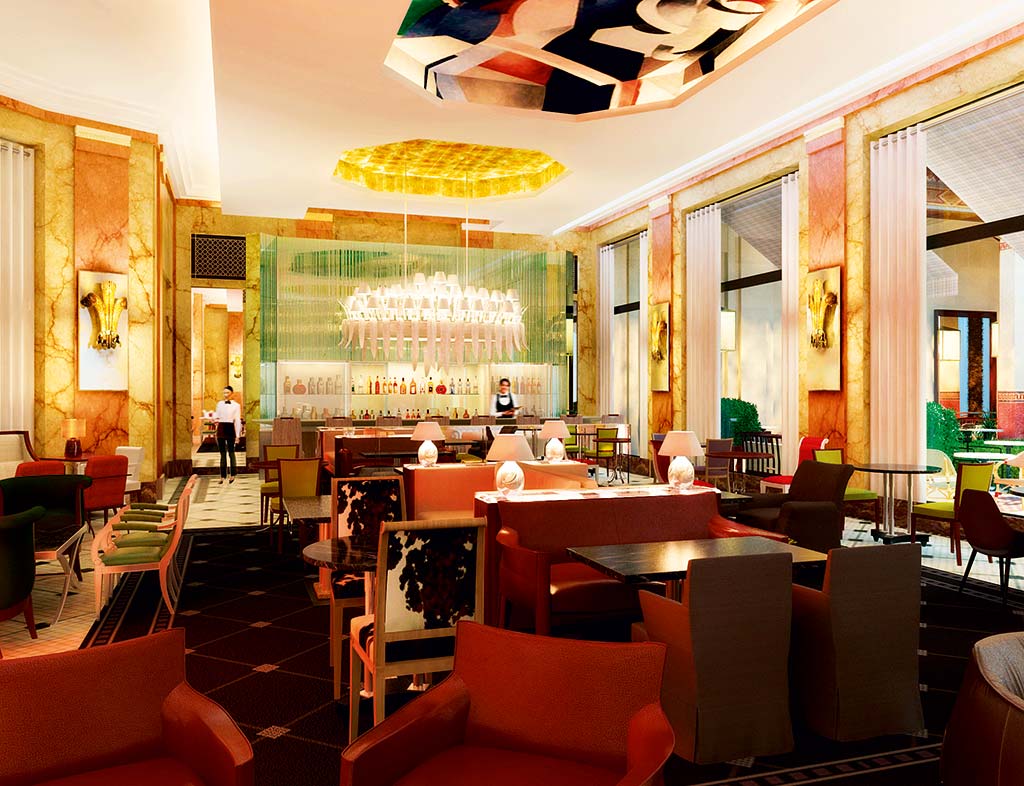 The Prince de Galles hotel in Paris is steeped in history. Since its inauguration in the 1920s, it has hosted many celebrities and heads of state and quickly became a true icon of the City of Light. The hotel was built on the site of the quarry that provided the stones used to build the neighbouring Arc de Triomphe.

Paris was an effervescent cauldron of urban life in the 1920s. Though still recovering from WWI, the city bustled with writers and artists, from F Scott Fitzgerald to Ernest Hemmingway. Despite the two hotels opening in competition, they were effectively named after the same person: “The title ‘Prince de Galles’ – ‘Prince of Wales’ – was the title given to King George V,” tells Rusconi.

From its opening Prince de Galles enjoyed much success, attracting a host of important personalities, both French and international. “We had Winston Churchill as a guest in July 1938, right before the start of WWII. We have since had Lord Chamberlain, Marlene Dietrich and Alexander of Yugoslavia stay with us,” says Rusconi. Prince de Galles remained an exclusive hotel for personalities for much of the twentieth century, attracting some of the most important names in show business and politics.

“Another illustrious guest that has stayed with us has been ‘The King’. Elvis Presley visited the hotel in 1958, when he was 23 years old and was already known as the King of Rock ‘n’ Roll; he was spending some time in Germany, and he visited Paris on three occasions, and became a regular until his passing in 1977,” says Rusconi. “We always attracted celebrity guests: Gina Lollobrigida, Michael Jackson, Gary Cooper and ZsaZsa Gabor have all stayed with us and made the Prince de Galles their home away from home.”

Golden location
Part of the reason for the hotel’s tremendous appeal is its location. Situated within the Triangle D’or – Paris’ Golden Triangle – the Prince de Galles is a stone’s throw from the most exclusive areas of Paris, like the Avenue Montaigne and the Rue Saint-Honoré and some of the city’s most famous architectural treasures. “Being in the heart of the city is
really an advantage for business travellers who can quickly reach meeting locations across Paris. We are only five minutes away from the Palais de Congrés, for example. Guests can also take advantage of the shopping on the famous Avenue George V, which is home to shops like Louis Vuitton and Hermès.”

In 2011, the hotel closed for the first real restoration since 1993. “The Musallam family of Jeddah, Saudi Arabia, who have owned the hotel for two decades now, decided to continue the legacy of Prince de Galles with a full refurbishment,” explains Rusconi. “The redevelopment, led by Ertrim Architects, saw interior designer Pierre-Yves Rochon transform the rooms, lobby and fitness centre while Bruno Borrione revamped the bar and restaurant.

“The Luxury Collection brand together with the hotel’s owners wanted to give back to the Prince de Galles its rich heritage as an art deco landmark. This is why they tasked Rochon, who has designed many five-star hotels in Paris, to recapture the hotel’s past and art deco heritage in the feel of the rooms. Bruno Borrione has a more contemporary style and his goal was to capture that in the bar, Les Heures, and restaurant, La Scène, our finest areas. But what is interesting is that the style of these two very distinctive designers really complement each other, because they both wanted to reflect the French identity and the unique character of Prince de Galles. We describe it as a bridge between historical heritage and modernity.”

Since the refurbishment the hotel has gained 44 luxuriously appointed suites and the magnificent Apartment Parisian. This duplex penthouse suite overlooks the city from the top floor of the hotel with breath-taking views of the Eiffel Tower, La Concorde and the Champs Elysées. A state-of-the-art fitness centre has been added while the Chaillot meeting room offers the latest in hi-tech conference facilities.

Art history
Because the main aim of the restoration was to bring Prince de Galles back to its art deco glory days, the building itself has been exquisitely conserved. Such extensive restoration work is expensive, but can produce some unexpected surprises. “When we converted the old banquet room into our new bar, we had to remove the carpet that lined the floor. As we lifted the carpet we found hidden under it this beautiful mosaic from the 1920s. It is original from when the hotel was built,” says Rusconi. “The same happened in the patio. So we have restored a series of original mosaics throughout the hotel, which had previously been hidden. Through these works of art we have brought back the history of the hotel.”

When Prince de Galles closed in 2011, it wanted to reward faithful guests from over the years and to share with them part of the hotel’s history. The toile de jouy installed during the last renovation in 1993 had been present in all the rooms, and a significant part of the hotel’s imagery, but the new restoration decided to go a different way and remove the distinctively French fabric from the walls. “But we wanted to create memorabilia from the hotel, so when we closed two years ago for refurbishment, we took this toile de jouy and created bags from it,” says Rusconi. “We gave them to our most loyal guests so they could take a piece of hotel history with them.” This created a further, enduring emotional connection between the hotel and its guests.

The driving force behind the 27-month restoration is the desire to modernise and offer state of the art facilities for high-end guests and Parisians alike. This is why the hotel has hired Stéphanie Le Quellec to open one of Paris’ first show-kitchen restaurants. “In French fine-dining restaurants the kitchens are actually hidden, and this is why we have called our restaurant La Scène, as the chef will be performing with her team every night,” explains Rusconi. “Guests will be able to see her coming up with these creative and wonderful dishes. The product will be the main ingredient and will lead the style of cooking.

“We want the hotel to be an international Parisian rendezvous, where international guests and citizens of Paris alike will be experiencing the Parisian scene.”