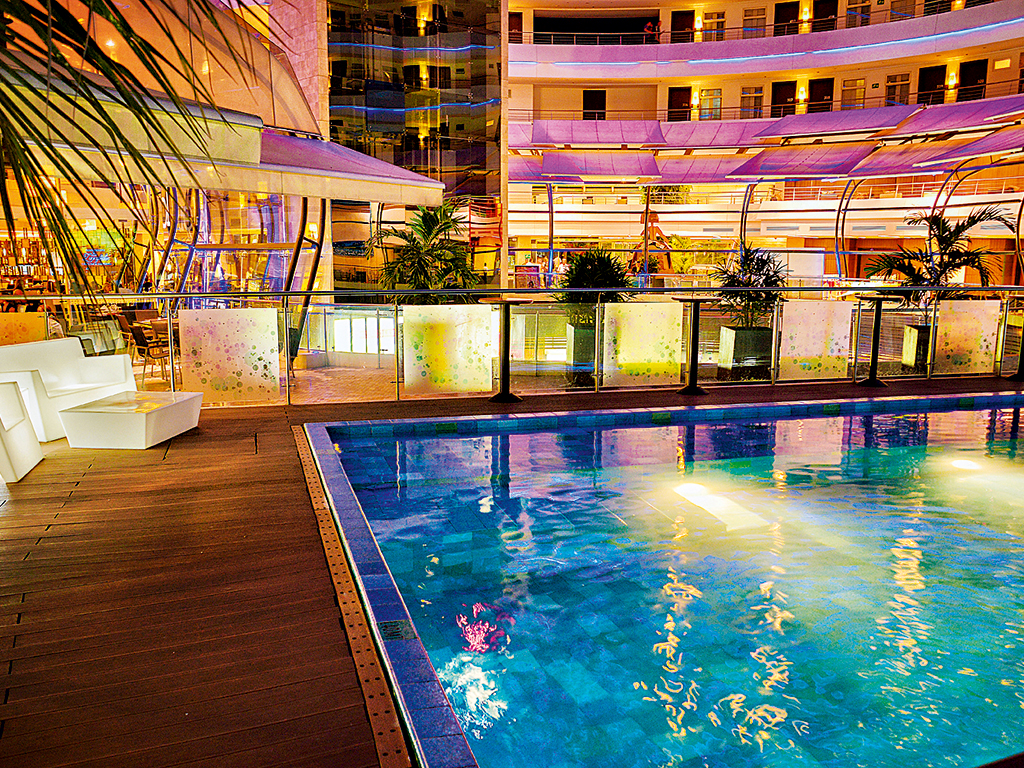 A pool at the Hotel Spiwak Chipichape Cali. The hotel is set in Cali, Colombia - a city named third most attractive destination for investment by the Financial Times' FDI Intelligence

Welcome to Cali, known worldwide as the capital of salsa and Valle del Cauca, and named third most attractive destination for investment by the Financial Times’ FDI Intelligence. Cali is found in Colombia, a country with enormous economic, tourism and social progress, recognised worldwide for its gastronomy, biodiversity, the warmth of its people, and the beauty of its landscapes.

In this place of enormous possibilities one finds the Hotel Spiwak Chipichape Cali, renowned for its splendid architecture, inspired by the Guggenheim Museum in New York. It is situated inside the main shopping centre of the city, a strategic point thanks to its proximity to the airport and the largest business centre in the Valle del Cauca. This has allowed it to differentiate itself from conventional hotels and pave the way for a new generation of luxury hotels in Colombia.

Colombian growth
Strategically speaking, being located in a country like Colombia brings great benefits to different sectors of the economy.

Consequently the Hotel Spiwak Chipichape Cali was opened four years ago with an investment of $65bn, maintaining an upward growth curve which sees occupancy today at 70 percent, 23 points above the average occupation of the city (47 percent according to data from Hotel and Tourist Association of Colombia, to June 15, 2014).

Its location in Colombia has allowed the hotel to augur success and a great business projection, as Colombia, in the heart of the American continent, becomes the gateway to South America. Two great oceans, providing various options in communications, tourism, trade and economic development, also surround it.

Additionally, the city of Cali, situated in one of the richest and most developed regions in the Republic of Colombia, with one of the fastest-growing economies and infrastructure in the country, has become a magnet for foreign investment.

Just 115km away from this city is Buenaventura, the main seaport of Colombia in the Pacific Ocean, with immense cargo imports and exports recorded every year, and one of the main economic and industrial centres. This splendid valley surrounded by towering mountains gives way to the Panamerican Highway that connects Colombia with Ecuador.

A window on progress
The grandeur of the Maga Nocturna, by artist Wladimir Zabaleta, seduces guests and visitors arriving at the Hotel Spiwak. This beautiful piece of art inspired by Las Meninas of Velázquez surprises with its postmodern design, luring in passersby to the wonderful installations it guards.

According to a report by the World Travel and Tourism Council, tourism in Colombia has continued to grow by 6.2 percent during 2014, a fact that has generated great demand for hotels in the country. At the same time the Investment Promotion Agency of the Pacific States affirms that between 2010 and 2014, investors from nine countries have chosen Colombia as the site for new hotel projects and have invested $803m, shaping this nation as a great destination for tourism and investment.

This is why the Hotel Spiwak Chipichape Cali has constantly evolved as Colombia grows, reaffirming itself as the most complete luxury hotel, through continuous work and innovation, ensuring it always meets the needs of its visitors. The 226 suites of the hotel are a perfect harmony of comfort, technology and modern designs, meeting the highest expectations. The hotel has created a special floor for women only, and has rooms with private terraces and jacuzzis that make a perfect space for romantic occasions.

The corridors leading to the rooms form an open spiral, giving guests a spectacular view of the architectural ensemble. From the top of the building you can look out upon the greatness of the city. The hotel decided to create a new space in this magical location for social and corporate events called The Hall of the Stars, adding to the nine existing ballrooms.

This 20,000sq m venue is full of innovation and modern facilities, and has the hallmark of the Preferred Hotel Group, which makes it the only guaranteed Hotel in Colombia for five-star travellers.

Super Cali
The Hotel Spiwak Chipichape Cali offers great possibilities for an amazing destination experience, without even leaving the hotel. The art that surrounds it, the exquisite range of typical Cali foods, the landscape and the warmth of its people, give guests the best of Cali and its culture.

“We are the first hotel in Cali where business and pleasure come together to provide an experience to live up to the highest demands, and thus be one of the few hotels that are located within a shopping centre, together with the consolidation of a team of good assistants, and innovation capacity, are the determining factors in achieving this position in so little time. If history is an indicator to where things go, that means they will continue to grow,” said Ángel Spiwak, President of Hotels Spiwak.

The hotel’s architecture is a harmonious integration of the urban environment and the natural environment. The majestic night lighting of the building, the comfort of its rooms, and the priority given to each of its guests, has earned the Hotel Spiwak an impressive range of different awards, among them: Tripadvisor Traveller’s Choice (2012, 2013, 2014); Certificate of Excellence Tripadvisor (2012, 2013, 2014); Business Destinations Travel Awards 2014 – Best Luxury Hotel, Colombia (2012, 2014); and an important recognition received by President of the Hotel Spiwak Chipichape Cali, Ángel Spiwak, as one of the top 10 businessmen of 2013 in Colombia.

Each of these awards contributes significantly to recognition of the work done over the years by the Hotel Spiwak Chipichape Cali with great success and pride, strengthening the business and making it the number one hotel for Cali travellers.

Finally, and as a result of its rapid growth, high demand, and its strategic location in Colombia, the Hotel Spiwak is preparing a new project this year. An investment of $70bn will add 263 rooms to the 226 existing rooms, with the construction of a new building in front of the current hotel. This new project will have smaller rooms with more affordable rates, contributing to the growth and development that exists locally and nationally.