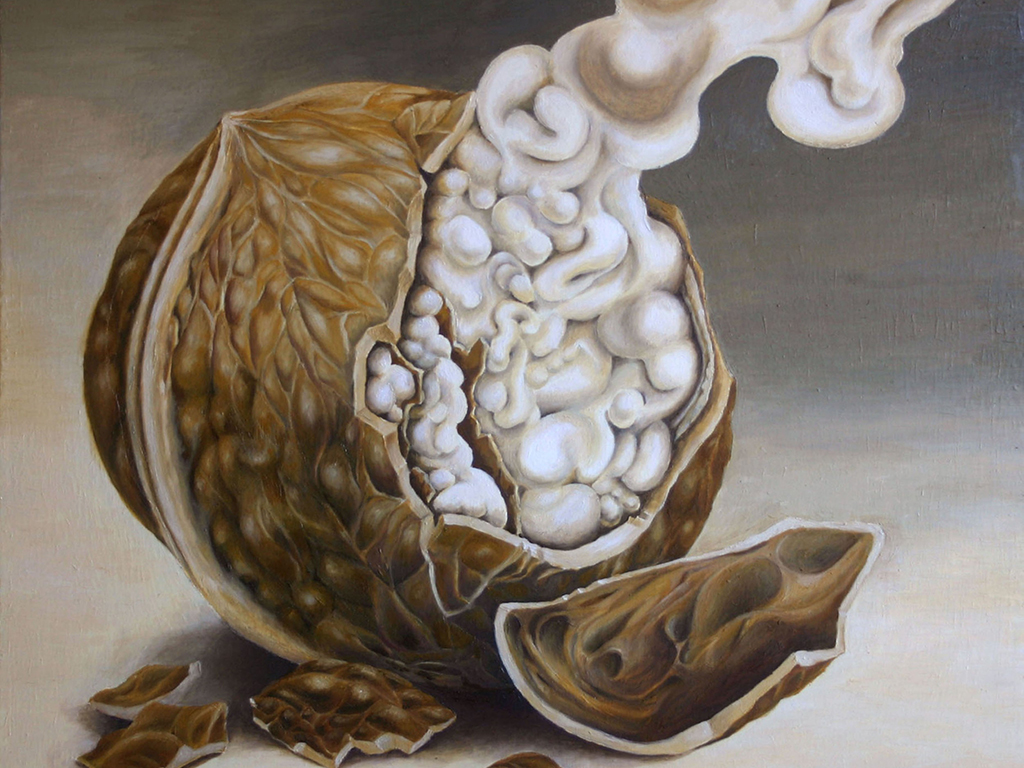 For most of us, Sunday is a day of rest: a time for family and friends, kicking back at home and recharging the batteries for the week to come. For Bologna-based curator Eugenio Santoro, however, there’s a rather more public dimension to Sundays at home. That’s because his centre storico apartment is not just a place to eat, sleep and raise a family, but a busy exhibition space too, where artists from all over the world present work for sale to a curious public.

Since Santoro founded Museo Orfeo nearly a year ago, exhibition openings that see a crowd of complete strangers pile into the curator’s home have taken place most Sundays. Shows run for a week, with news of what’s on spread by word-of-mouth and via social media. A diverse range of artistic practice is represented, from works on paper, paintings and sculpture to video works projected onto the wall across the road. The only real limitation, says Santoro, is space.

A space for artists
The curator keeps the focus of the gallery broad and its programme dynamic so that he can be as responsive as possible to the “needs of artists”. He was moved to open Museo Orfeo last year after becoming increasingly frustrated by the lack of affordable exhibition space in Bologna. Santoro has worked as a freelance curator at venues across the city for many years now (an exhibition he put together to celebrate the 50th anniversary of the death of Bologna artist Giorgio Morandi is currently touring Italy, having opened in Bologna earlier this year); running what he calls his “home gallery” gives him such satisfaction precisely because it operates outside of the conventions of traditional gallery spaces.

The Emilia-Romagna capital is home to a respected art school, the Academia di Belle Arte di Bologna, and many of the artists showing work at Museo Orfeo are students or alumni. Santoro showcases not just the work of young and emerging Italian artists, but makers from places as diverse as Iran, China and Sweden. This autumn’s programme includes solo exhibitions from Russian painter Irina Tum (October 6-13) and Hong Kong-based graphic artist Michael Cheung (December 1-31), as well as a photography exhibition, So Faraway So Close, that pairs local photographers Fabio Cappellini and Paola Mischiatti (September 22-29).

The show will contrast Cappellini’s witty, irreverent take on the modern world with Mischiatti’s otherworldly images of bodies in motion. While he looks outward, she looks inward; he works in colour, her photographs are in black and white. Santoro hopes that the juxtaposition will open visitors’ eyes to the broad possibilities of photography as an art form.

He’s also excited about Tum’s show, which will explore Italian identity through a painterly examination of typically Italian objects and contexts. Entitled Another View, the show is intended, Santoro says, “to show Italy to Italians”.

The maximum capacity of the flat is around 35 people, so exhibition openings have an intimate feel

Art for everyone
The focus at Museo Orfeo is on affordable art, with price tags in the hundreds rather than the thousands of euros. This is partly a reflection of the place in the market of the young and emerging artists Santoro likes to champion, but it’s also part of a concerted attempt to widen access to art collecting in general. Most commercial galleries charge prices beyond the reach of ordinary people, the curator feels. The people coming through Santoro’s door – students, academics, white-collar workers – are not big spenders, so the artworks on his walls do not carry hefty price tags. It’s possible to pick up a unique piece at Museo Orfeo from around €250.

Seeing artworks in the cosy environment of the 100sq m apartment that Santoro shares with his wife and their young daughter helps this non-expert public to imagine what a piece would look like in the surroundings of their own homes. “The final destination of a painting, sculpture, et cetera, is a home, so the buyer can see immediately how it can work inside an apartment.”

The maximum capacity of the flat is around 35 people, so exhibition openings have an intimate feel more reminiscent of a house warming than a private view. Santoro does a short presentation at each launch but mostly his role at these events is genial host, ensuring that everyone is having a good time and encouraging people to chat about the work they’re encountering.

Having run a bed and breakfast in the past, he feels not the slightest discomfort at opening his door to strangers. Security isn’t something that concerns him either: “After [welcoming] thousands of people, I’ve understood that the majority of people are good! If we don’t believe in others, we don’t believe in ourselves,” he says, with typical good humour.

A worthy challenge
Santoro takes 20 percent commission on sales and reports that business is good. But there’s no such thing as an average exhibition, in sales terms: at some shows he’ll sell 10 works, at others he’ll have no buyers at all. The unreliable nature of the business is all part of the fun, he says: “I love the thrill; I love the challenge.”

The bottom line is important, of course, but it’s by no means the be all and end all for Santoro. He’s far more interested in the way that the unique context of Museo Orfeo enables a different kind of engagement in contemporary art. In the informal atmosphere of his home gallery, visitors are able to relax and open themselves up to the works they’re seeing, he believes, more than is possible in more formal surroundings.

Photographer Paola Mischiatti agrees. She believes that by opting to visit a non-traditional environment like this one, visitors to Museo Orfeo are demonstrating their openness to new things and are therefore exactly the sorts of people likely to get the most out of the art they come across there.

For Santoro, the impact on visitors to his home gallery isn’t just theoretical, it’s something he observes with his own eyes every day of the week. “I have spent many years in galleries and I have always noticed that the frozen atmosphere doesn’t help. The beautiful thing is that when people arrive here they take off their coats. In a traditional art gallery you keep your jacket on.”