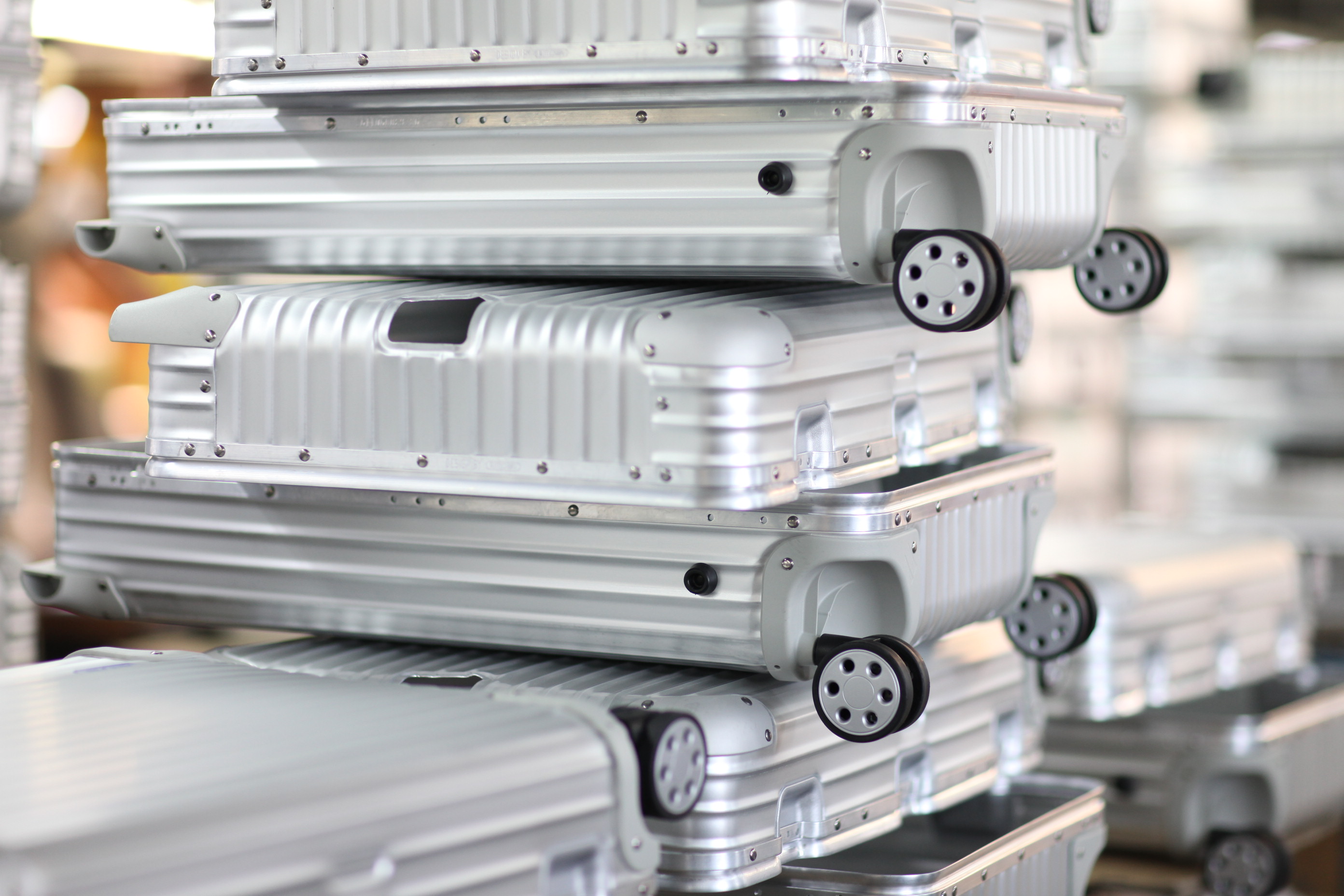 Rimowa counts among the premium brands for cases made of aluminium and the high-tech material polycarbonate and is one of the few manufacturers producing luggage in Germany. It is possibly also the only manufacturer with a continuous history and a strong link with tradition – an exception in the industry. For Rimowa “Made in Germany” and “German Engineering” mean excellent materials, brilliant technology and extraordinary design with the very highest quality of workmanship.

In 2000, Rimowa was the first in the industry to globally introduce polycarbonate into its case production – and thus revolutionised the global market in luggage. More than three years were spent on research before the first Rimowa case made of polycarbonate satisfied the demands of the engineers and designers. The triumph of this material which was derived from aviation technology and has been used by more and more competitors since Rimowa’s success, lies in its fantastic properties: Light as a feather and at the same time extremely resilient, the material ‘saves’ its form and in the event of deformations, springs back to its original visual effect as if by magic. This remarkable capability was even confirmed by the TÜV, who test each series manufactured by Rimowa.

For decades, the unmistakable characteristic of the continuously optimised collections has been the elegant and instantly recognisable contour structure of the cases. The traditional company is based in Cologne, sells its products globally in more than 65 countries via selected dealers, but also through its own stores and flagship stores, whose number is continuously increasing throughout the world. These are always found in the best locations and in cities such as Beverly Hills, Toronto, Hong Kong, Taipei, Seoul, Rio de Janeiro, Sao Paulo, Beijing, Macao, Shanghai, Hangzhou, Singapore, Tokyo, Munich and Milan.

In addition to the four global headquarters in Cologne, Hong Kong, Canada and Sao Paulo, since 2008 Rimowa has had an international network of production workshops. Rimowa cases are manufactured in Germany, the Czech Republic and Canada. A major part of the production work is still done by hand, for this is the only way to guarantee the extraordinary quality of a Rimowa case. Only the polycarbonate bodies are deep drawn by a machine – a procedure developed by Rimowa itself in order to guarantee the greatest possible flexibility and robustness of this material.

There is no question that other German premium brands are also happy to enter into co-operation with Rimowa. Business synergies with Porsche and Lufthansa have existed for several years: Rimowa supplies the Lufthansa World Shop with its products and also participates in the Lufthansa premium system.

And, if you are the owner of a Porsche, you also have access to a very special service: Rimowa luggage to match the colour of your vehicle. Bringing together qualities that belong together – design, capability, futurism, style fidelity, high quality, brilliant practicability and the feeling of owning something special – every piece of Rimowa luggage feels like a naturally useful and elegant accessory.

Every year tells a story
The history of the company whose luggage is highly valued around the globe by business travellers, flight crews, tourists, modern high-tech nomads, filmmakers and photographers, started more than 100 years ago. It is a typically German – and thus extraordinary – success story of an enthusiastic visionary and his family business and their continuous rise to the position of global leading player.

The first case was produced in 1898 in Cologne, and at the time the name of the company was Kofferfabrik Paul Morszeck. At the turn of the century, the cases were made of wood but the Cologne factory was already setting new standards with designs that were as lightweight as possible. Within a few years, Rimowa’s large wardrobe and steamer trunks would become the representative travel companions of high society.

In the 1920s discerning globetrotters were delighted by the elegant cases produced by the company. In 1937, Richard Morszeck, the son of the company founder, brought the first steamer trunk made of lightweight metal onto the market. This was just the first of numerous brilliant innovative ideas upon which the global success of Rimowa would be based. The brand name Rimowa was later derived from Richard Morszeck (Richard Morszeck Warenzeichen).

In 1950, the firm created its first case made from aluminium with the typical contour structure that has since made Rimowa products unmistakeable. This new design combined minimum weight with maximum stability and quickly attained cult status among the international jet set.

In 1976, Dieter Morszeck, the grandson of the company founder, succeeded with another pioneering development – the first waterproof transport case. These pieces were in great demand among film and television crews and with professional photographers and reporters as the Rimowa waterproof system reliably protected the sensitive equipment of the professionals against water, humidity, tropical heat or artic cold.

In 1998, Rimowa celebrated its 100-year company anniversary. Technical precision, high-quality materials, precision workmanship and continuous striving for innovation and intelligent product improvement formed the pillars of success and Rimowa luggage was cemented as the epitome of high-end travel.

Continuing to innovate, in 2000, Dieter Morszeck, who since 1981 has been the third-generation family member to head the company, for the first time used the recyclable material polycarbonate in case construction.

Polycarbonate, which is used for aeroplane panels and in vehicle construction, is extremely resilient and shock proof, while dents regain their original form independently and provide great stability and low weight. Rimowa was thus the first luggage manufacturer worldwide to use this plastic. This revolution in the industry was subsequently adopted by almost all competitors, who would follow with their own polycarbonate lines. None, however, would be as successful as Rimowa, whose luggage continues to lead the industry in design, performance and durability – this fulfilling Dieter Morszeck’s credo: “Handcraft meets high tech”.

Innovation never sleeps
Between 2000 and 2006, Rimowa further diversified its product lines and equipped them with state-of-the-art technology. Among other things, innovations include the patented ‘Multiwheel’ systems, which greatly increase the mobility of the cases. Thanks to technology adapted from office chairs, even heavy cases can be rotated almost playfully on their axis. Moreover, the new cases are equipped with certified combination locks with combined closing cylinders, which can be opened for inspection purposes by the American Transportation Security Administration (TSA) upon arrival in the USA. Modular interior pocket systems, rotatable handles, the development of the Tango wardrobe trunk and co-operation with Lufthansa and Porsche have further increased the kudos of the company.

In 2008, the product range was extended again to include the Salsa Deluxe series, available in new colour shades, in addition to the new Topas Titanium luxury line. A dozen different case series in various sizes are now waiting to be put to all-round use under the hardest of conditions. Later in 2009, Rimowa released the highly-popular Salsa Air, which was the first to contain a recessed combination lock with an ABUS TSA cylinder that was developed in Europe.

The 60th anniversary of aluminium cases was celebrated in 2010, along with a decade of using polycarbonate. This year also saw Rimowa receive two awards from the USA – the Salsa Deluxe was named ‘Best Luggage’ by travel magazine Travel+Leisure, while the Salsa Air was awarded first prize in the Travel Goods Association Awards.

Back to the present day and Rimowa is still being recognised for its excellent range of luggage for all kinds of professionals around the globe. Finally, in 2012 the firm proudly received ‘Best Business Travel Accessory, 2012’ for the Salsa Air in the Business Destinations Travel Awards and is looking forward to another decade of excellence in luggage design.